Our all-time favorite TV channel, Nickelodeon ends summer vacation with a bang as it recently held Nickelodeon Summer Festival at the open grounds of Bonifacio Global City in Taguig. Nicksters from all ages did not mind the sweltering afternoon heat. Never mind if they were in sweat or they forgot to put on some sunblock. Here’s the best part: Admissions to Nickelodeon events such as these are FREE! 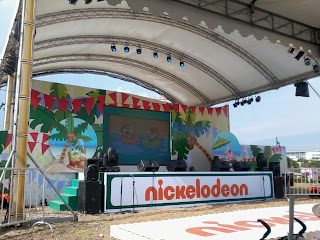 Nickelodeon events are guaranteed to be filled with fun, games and surprises, so for a true blooded Nickster, attendance of the whole family is a must! There were Moms, Dads, Aunts, Uncles, kids, tweens, teens, even toddlers, babies with nannies—every Nickelodeon fan gamely joined the said festivity with a carnival Mardi Gras themed party. It felt like there really was a town fiesta going on with the colorful trimmings across the event area.


The Buganda Drumbeaters and dancers kicked off the program with upbeat drums to the delight of the crowd. Nicksters Lesley and birthday boy Robi hosted the program. There have been game booths from various sponsors as well as awesome prizes. It was indeed an afternoon of fun, laughter and slime as kids, tweens and those kids-at-heart enjoyed the entire day with loads of freebies, prizes and surprises.  What’s a Nickelodeon event without the gooey green slime they’re known for? Kids had a messy yet fun way to beat the summer heat by getting all wet in the You Gotta See This Backstage Pass Machine. They’ve certainly felt how it is to be slimed just like their fave Nickelodeon stars.

There have been wonderful booths like the giant climb and bounce inflatable slide for young kids to enjoy, apart from on stage games with awesome prizes. In fact, there have been two lucky kids from the Air Asia on stage games who both won a free roundtrip ticket for a family of four (for each kid) from Clark (one bound for Kalibo while the other one’s bound for Davao)! Other kids won for themselves Teenage Mutant Ninja Turtles figure toys. Hmm…How I envy them, I wish I could have one. I remember I had wanted that toy as a child. Oh, quite too late, I know if I’d have them, I’m just going to put them on display and not play with them. But how I really wish it were available during my time as a kid. Btw, the Teenage Mutant Ninja Turtles toy figures (along with master Splinter and that of villain Shreder) are available at Toy Kingdom. Each toys are sold separately.


Now, going back to the Nickelodeon Summer Festival, birthday boy and Nickelodeon events’ host Robi was caught by surprise when he was greeted with a Happy Birthday song instead of the usual slime signal in one of the Slime Time segment of the program.  He gamely danced with a hula-hoop in hand.
Nickelodeon favorites Dora the Explorer and her cousin Diego made a special appearance together with sponsor mascots Ace (from Air Asia), Proppy (from Propan TLC) and Lioness and Paddlepop (from Selecta Paddlepop). During the intermission, the Sandugo Colorguards also displayed their talents in flag exhibition that has made the audiences wowed.

Nicksters also enjoyed the Nickelodeon Trivia Games where they were asked questions related to their well-loved shows on their favorite channel.  Lucky Nicksters brought home tickets to the NidoFortified Science Discovery Center, SpongebobSquarepants Water Squirters, Spongebob designed towels, etc., and these are just some of the amazing prizes that were given away. Of course, Nickelodeon events won’t be complete without the presence of much loved Spongebob Squarepants and his best buddy Patrick Star.


As an added bonus to Nickelodeon fans and as the program’s finale, Teenage Mutant Ninja Turtles’ Leonardo and Donatello also made a special appearance in the show, a first time in a Nickelodeon event in the Philippines. Personally, it was something that I had really looked forward to. Having grown up watching the Teenage Mutant Ninja Turtles back in the 90’s, I knew their names even up to this day. So it was also a thrill on my part to see them up close and personal. Seeing the ninja duos on stage performing a mixture of dance and martial arts brought back warm memories of my childhood.  Aahh, it felt so good to reminisce and be a child again. So, who says that Nickelodeon events are only for children?

Every Nickelodeon event is for every Nickster by heart, regardless of your age, you can always be a kid-at-heart.  Nickelodeon Summer Festival is an event that my family and I will always cherish.

Purple Plum Fairy thanks Ms. Ginny Guanco of Stratworks for the invites.