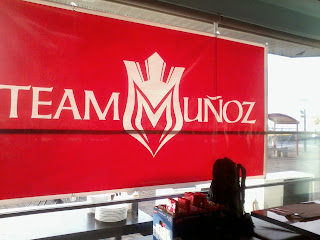 It was one of those what we could call as surreal moments in my life. From the time I was informed that the UFC Middleweight Champion Mark Munoz, (better known by fans as The Filipino Wrecking Machine) happens to be my Mom’s first cousin. Mom’s late mother being the eldest sister of Mark’s Dad, and that only meant one thing, that we’re distant relatives! Whew!
And then came in the good news, Mark’s going to be in town for the Mixed Martial Arts seminar he’ll be having sponsored by the Gold’s Gym in Libis, and he’s also here as support to his trained fighter, Raja Shippen who fought with Harris Sarmiento during the PXC (Pacific X-treme Combat) held at the Ynares Sports Arena in Pasig City.

Since we were informed that Mark will only be staying for a maximum of four days in the Philippines (his first visit actually), we were glad that Mark was able to squeeze in a couple of hours to meet the rest of his father’s side clan (that includes us) held at the Blackbeard Seafood Island Grill at San Miguel By The Bay, SM Mall of Asia last February 21, 2012.  Fans, mall-goers, fellow diners and even the staff of Blackbeard’s Seafood Island also had the rare chance to take pictures with him.
To be completely honest, I used to work in one of the country’s television network and I’ve never been star struck by anyone even if I’d get the chance to be up close and personal with celebrities. So I didn’t know what it is about Mark that made me turn taciturn to the point of almost being speechless during our first meeting. Could it be that because we’re relatives? Or is it because I’d have to speak English? (Oh, but I can manage to converse and speak good English) I guess it’s more because of the fact that Mark’s very approachable and down-to-earth. Yes, despite his fame and gained popularity (if you haven’t heard of him, go search him in Wikipedia or Google), plus he’s very warm in person. The very first time we were introduced to each other, he immediately asks for a hug.


I am not saying all his good stuff just because he’s my relative. I had been fortunate enough to get to know him and meet him, during such times; I was able to observe him. I’ve learned that despite his superstar status, he never forgets to be grateful, especially to his fans.  It makes his day when…people come up to him and say, “You’re my favorite idol—can I take a picture?” He always hugs his fans especially upon learning they are fellow Filipinos.
Mark says he’s always wanted to visit the Philippines. But since he became busy with his trainings and all, it had been difficult for him to do so with his tight schedules. The opportunity only came when he was injured on his elbow with his last fight with Chael Sonnen three weeks ago, thereby giving him some sort of a blessing in disguise because his schedules had been adjusted to give way to a surgery, physical therapy sessions etc.  And yes that includes a travel to the Philippines.

34-year-old Mark Kenery Munoz is a son of a retired Navy serviceman and his mom who hails from Sta. Ana, Manila. They used to own a Filipino restaurant in Vallejo, California where former Filipino movie star (a famous actress in the 70’s) Rosemarie Sonora (actress Sheryl Cruz’ mother) used to work as a waitress. Mark is now happily married with two kids.


Here's a video of how Mark Munoz was touched by the wonderful gestures of his family in the said reunion:
“The Filipino culture…these are my roots man. I grew up Filipino and around Filipinos. I just love my culture man,” says Mark. “I was truly happy to finally come home to my roots and meet my Dad’s family. I am looking forward to more visits in the Philippines soon.”
“Each time I go up the ring, I wanted to make my family proud, and ultimately make every Filipino proud of me,” says Mark.
To you Uncle Mark or Kuya (older brother because you’re too young to be called Tito or Uncle), we’re so proud of you. Thank you for giving us the chance to get to know you more.  We look forward to your next visit soon. We’re here to support you all the way. Good luck in all your future fights. God bless!
Follow the life of Mark Munoz at his own website http://www.markmunozmma.com where you could also buy collectible shirts and other items from the Team Munoz online store.
xoxo,