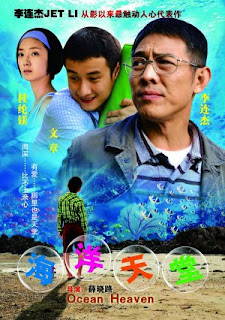 The synopsis caught my attention: Ocean Heaven is a family drama which features a father- Sam Wong (played by Jet Li), who is solely taking care of his autistic child- Dafu.

Wong finds out that he has liver cancer and has a few days to live. Not only does Wang have to cope with his own suffering and impending death, he also has to deal with the heartache of leaving Dafu with no immediate family.

This heartwarming film shows the challenges of being a single parent and how parents, even on their last days, would do anything just to ensure the safety and happiness of their children.

We were surprised to see Jet Li in this movie because this is the first to cast Li in a non-kung-fu film where he won the 2010 Wen Zhang Best Actor Award. The movie was also recognized by the Shanghai Media Awards, CCTV Movie Channel Media Awards 2010 and Golden Goblet Award. In July 2011, Li even named one of his charity projects as Ocean Heaven Project to help children with autism, celebral palsy and other disorders.

Autism is a lifelong disorder. Early intervention, occurring as early as the first two years of life, has been shown to improve language and socialization, but continued intervention and education throughout the course of the individual’s life is beneficial. The film tackles the hurdles a solo parent with an almost grown-up special child had to endure .
The film spells LOVE all throughout the ending. I know most parents would be able to relate to it even those who do not have a special child. Kyle, my adopted nephew (who has ADHD) also enjoyed the movie. It reminds him of his own “stubbornness” and “funny antics”. He even asked if he’s kind of the same with the lead son Dafu. But I told him even if they’re both special children, they have different conditions & needs. He’s way ahead in terms of understanding than autistic children like Dafu. I told him he should be grateful of his own gift, just like Dafu’s natural affinity to water (he’s an excellent swimmer) in the film, Kyle excels in the arts.
Catch this film in videos (if it is available) or research it on the net. It is definitely worth your time. Although you know exactly what will happen towards the ending, tears will fall & laughter will be heard as you watch this film. And this film is dedicated to ordinary parents with extraordinary love for their children.
Special thanks to Spring Chinese Film  Festival, Ateneo Celadon organization and Shangrila Plaza mall for free film showing such as these.