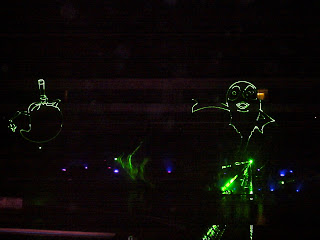 I was recently invited to see the spectacular Musical Fountain Show at the Manila Ocean Park. Although I must have heard about it before, I never had the chance to actually watch the said show. The weather that day was a bit gloomy and I was actually having second thoughts if I’d still go to the said event. I’m glad I did because upon reaching Manila Ocean park, the weather had cooperated with me. It has stopped raining.
“Once Upon an Ocean” is a 30-minute spectacle of fountain, laser lights, special effects, animation fused in one grand musicale. It is the country’s first & largest musical fountain show, at par with the world’s best. It reaches up to about 120 feet in height and over 1,600 water nozzles are used to achieve stunning visual display. And I am just talking about the physical details of the show. If you probe a little deeper, you’ll find out that the show is directed by one of the best theater & concert director, Mr. Freddie Santos. The other people behind the show were also powerhouse names in their respective fields: John Batalla (Fountain & Lights Programming), Tim Bennett (Laser Effects), Mio Infante & Twinkle Zamora (Mascots), Torch Productions (Animation) & Alfred Lauzon (Choreography).
Kids and adults will be delighted to meet fascinating underwater characters such as Octavio the giant octopus musical conductor, the funny Lobsterrific, Seahorse, Clownfish, the cool Starfish Trio and Stingray. The show features entertaining live performances, funny antics and lessons on marine conservation.

Here's an amateur video I had taken while watching the said show. Forgive my mom for being a bit talkative (you can hear her voice on the video), it's just that she was so excited watching the show. But anyway, I hope this short video will somehow give you a glimpse of what you can expect from the said show. It's still best for you to watch the show live as my mobile video camera's a bit blurred & dark.


Upon entering the Acquatica Center, a modern stage venue (with 1,900 seating capacity where the show is being held), an MOP staff hands you a disposable raincoat for free. I didn’t know what that’s for at first. I later realized one needs to prepare to get wet during the show & that’s what the raincoat is for. Audiences were encouraged to participate in this interactive show. Show starts at 7PM from Wednesday to Sunday.


Manila Ocean Park's Musical Fountain Show was a real treat for every family. It's a once in a lifetime chance to see spectacular fountain and beaming lights show. Seeing this show reminds me of the more popular Bellagio Fountains of Las Vegas. It is really expensive to bring the entire family to Las Vegas. But who says you can't enjoy the same sights in Manila? Manila Ocean Park's Musical Fountain show does more than entertain the audience with ooohs & aaahhs...It treats the whole family by bringing in a world-class entertaining show with moral values where your kids will surely learn while having fun at the show. Plus you could take photos with the characters after the show just like me & my mom did. Think about it: one amazing night spent with the family+ one great show+ awesome story that kids & kids-at-heart will love = wonderful memories to remember.

For more details: call 567-7777 loc. 151 or visit their website at www.manilaoceanpark.com