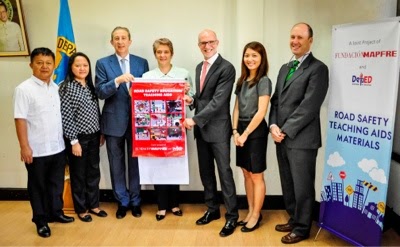 Spanish Ambassador to the Philippines, H.E. Luis Antonio Calvo, with DepEd Undersecretary of Programs and Projects Dina Ocampo, and Mapfre Insular president and CEO, Javier Warleta, initiated theturnover of Road Safety Teaching Aids for public elementary schools in the country, between FundacionMapfre and the Department of Education (DepEd).

The materials were given to improve the teaching-learning process in schools so that students may be aware of how to safely navigate Philippine roads, particularly the busy streets of the metro. Soft copies of the program’s materials will be stored in the DepEd Portal to provide easier access for the teachers.

Ultimately, the goal is to reach out to 47,000 schools nationwide—both in the elementary and secondary levels. On top of raising awareness among the youth, DepEd, Mapfre, and the Spanish Embassy would like to extend road safety consciousness to adults as well, since they are the members of society who use the roads more often. DepEd recognizes that changes will come faster if adults lead by example. As a start, teachers must be able to learn from the program and share it with their students and families.

The Spanish Ministry of Education and Embassy have worked closely with DepEd on special programs, and are thus very supportive of the project. The collaborators would like to emphasize safety as a way of life. They believe that values and health education are as important as traffic and car safety principles.

Fundacion Mapfre, the corporate social responsibility arm of MAPFRE S.A., a leading Spanish insurancemultinational company, operating in the Philippines through Mapfre Insular, has been working with the Department of Education since 2011, developing modules in two learning areas: Araling Panlipunan and Edukasyon sa Pagpapakatao. Since then, road safety has been taught in at least two thousand schools nationwide. Beginning this March 2015, teaching aids will be distributed and used in schools.

Email ThisBlogThis!Share to TwitterShare to FacebookShare to Pinterest
Labels: Department of Education (DepEd), Education, Spanish Ambassador to the Philippines