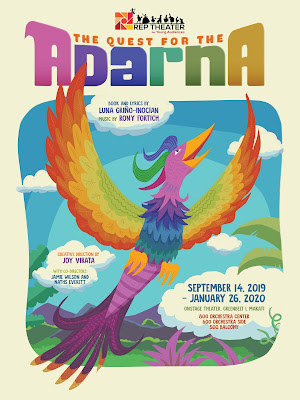 It was on my first year in high school where I came across the kingdom of Berbanya where the adventures of Ibong Adarna happened. It was a really nice story about three brothers and their father [the King] who  has gotten ill and only the Adarna bird could restore back the King's health. A 16th century Filipino epic poem about an eponymous magical bird, the story of the Ibong Adarna has captivated children across the Philippines for generations. Now, it's thrilling to know that well-loved theater company, Repertory Philippines takes the wonderful story of the Adarna bird onstage as it is brings the colorful tale to life for families everywhere with a new English version called The Quest for the Adarna.

Produced through RTYA (REP’s Theater for Young Audiences), the vibrant original musical will be running from September 14 to January 26 at Onstage Theater, Greenbelt 1.

The play takes place in the peaceable and prosperous kingdom of Berbania, which is ruled by the beloved King Fernando and his equally loved wife, Queen Valeriana. They are blessed with three sons–all mighty warriors. The eldest and heir to the throne is the pompous Prince Pedro; the second son is the dashing Prince Diego; and, the youngest, the kind-hearted Prince Juan.

Their idyllic life is shattered when King Fernando is struck by a mysterious sickness and can only be healed by the song of the mythical bird, Adarna. Anyone wanting to capture the bird must travel to its home on Mount Tabor, a journey that is difficult and froth with danger. After his first two brothers fail on their quest, Prince Juan bravely takes on the task to save his father.

An enduring epic that remains one of our great cultural treasures, the Ibong Adarna story is reborn as an entertaining play with original music. Suitable for children of all ages, The Quest for the Adarna is an original RTYA Production under Creative Director Joy Virata, assisted by co-directors Jamie Wilson and Naths Everett, with music by Rony Fortich and book and lyrics by Luna Griño-Inocian.

Eager to explore more of Batangas? Begin your ecstatic island getaway with an engaging combination of good food and awesome water sports. Discover new sights, smells, and tastes with a beautiful beachside feast. Feel right at home as you ease into Saltitude Dive & Beach Resort, the destination of choice for a memorable escapade.

There’s nothing like witnessing the sea waters as they reflect the eternal horizon. During my recent out of town travel with fellow foodies and blogger friends, we had the chance to enjoy a sumptuous brunch buffet at Saltitude Dive & Beach Resort in Anilao, Mabini, Batangas. After all, one of the must-do’s when you’re on a travel is to sample the buffet spread and what it difference does it offer. This definitely saves you the trouble of finding a suitable venue during your weekend getaway.

Saltitude Dive & Beach Resort is known for its most spectacular beach front location, but one can also indulge in fabulously fresh, all-day dining here. Explore the crystal clear water and scattered diving spots that surround the resort and have fun in different water sports like windsurfing, kayak, snorkel, swimming among many others.


Saltitude Dive & Beach Resort recently launched “Brunchin’ @ the beach” where they featured a selection of intercontinental cuisines. This exciting dining experience happens every Saturday and is themed per cuisine each time. Some Saturdays would be Spanish, other Saturdays it will be Asian, yet intercontinental spread from Pinoy, to samplings of Japanese, Chinese, Italian and American cuisines.

Are you tired of your usual cup of joe? If you're a caffeine addict like me, you'd be happy to know there's a new player in retail and distribution which recently launched an online store for Philippine specialty coffee.

Caffeine Brothers Co., an up-and-coming startup specialty coffee retail and distributorship based in Manila, Philippines, announced today the finest launch in the Philippine Coffee Industry history with the release of CB's Finest - the kickstarter. The first addition to the voluminous blends to be released shall be available for everyone to enjoy and within everyone's reach through their online store at caffeinebrothers.co.

Amidst several coffee company which claims to have the perfect coffee, Caffeine Brothers Co. thrives through technology paired with deep love for a good cup of coffee. Now, enthusiasts and caffeine buffs can enjoy various types of coffee beans and Caffeine Brothers' signature blend sourced from local growers only in the Philippines straight from the web to their doorstep.

"Most us do not actually know but for a time in our past, the Philippines was hailed as a top coffee producing nation. We were once a coffee country!" said Robin, co-founder of Caffeine Brothers Co.

"This time is the perfect opportunity for Caffeine Brothers to grow. Our sole mission for this venture is to share our passion for coffee, be one of the pioneers in the purely online arena, and pro-caffeinate the country with our home-grown beans." he added.

I’ve been passing along that area in Makati Avenue for quite a while and I hadn’t known that a new establishment now occupies the area where the space that the old Fersal Hotel used to occupy has been turned into a restaurant now serves authentic Mediterranean food. Located right in the heart of Makati City’s commercial business district, Zula Manila Hostel and Restraurant opened its doors to the public mid of this year, 2019. The storefront looks commanding and honestly I was thinking it was a place you’d only want to go to on special occasions. Glad to know I’m entirely wrong. Together with my foodie friends Rence and Kat, who’s a professional chef, we decided to check out what does Zula Manila has to offer.

Before opening the restaurant, the people behind the said resto actually took their time to do some research on Mediterranean cuisine by visiting Israel and trying out all the recommended dishes as well as do their studies on food and development, a requirement for those who are in the food industry. The effort was there for they really didn't need to do such, but they wanted to serve authentic Mediterranean food which aren't limited to souvlaki and tzatsiki. 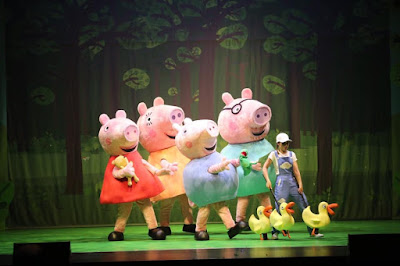 Good news for fans of Peppa Pig! Circles Entertainment is bringing in our beloved Peppa Pig on a live performance which will be held on at The Theater at Solaire on August 24 & 25, 2019. There will be 2 shows per day, 2pm and another one at 5pm. Save those dates parents! Your kids will surely love and enjoy seeing their favorite adorable Peppa Pig and her family come to life on stage. 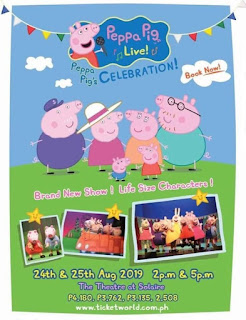 Peppa Pig’s Celebration tells the story of how truly special it is to collect and treasure shared memories.

It’s nice to know that people are becoming more aware of what they eat nowadays—people have started to eat healthier—that means more fiber, more organic foods and greens. As they say, it’s better to be careful and selective now with what we put inside our body than be merry now and regret later. The sad part however is that most restaurants that offer these so-called healthy foods aren’t necessarily cheap to begin with. In fact, most of them are quite expensive which is understandably so as organic foods entails hard work and more patience.  So when I’ve come across a healthy restaurant that offer delicious yet healthy foods which are reasonably priced, I couldn’t help but share them with my blog’s readers! Yes, I’ve got to share them with you.

Have you guys heard about Jar ‘d in Salad House? If not, then you must be missing out on something. I recently tried Jar ‘d in Salad House which is tucked in the heart of Congressional Avenue, corner April Extension [near Paras Alter Station]. It’s a nice cozy restaurant that offers a great alternative to the usual fast food grub that we often eat. They’ve got awesome variants of healthy green salads to choose from. You can choose to have them in a bowl [for dine-in customers] or have them prepared especially for you upon order in a unique huge salad jars. Yes, the salads are made upon order so you can be assured of its freshness. Their salads are very affordable with each bowl/jar ranging from Php220 to Php350. 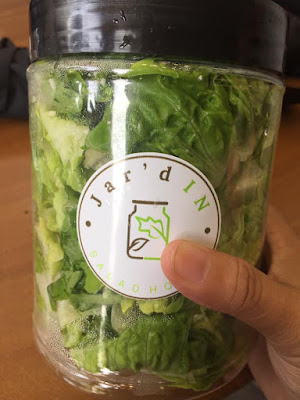 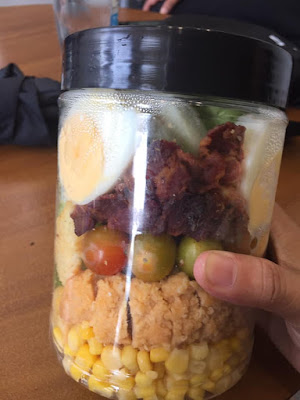 Here's a short interview on Mr. Paul Gan, co-owner of the Jar 'd IN Salad House where he explains how they came about the said healthy restaurant concept:

And here’s the best part: These greens aren’t as expensive when compared to the more popular ones that sell green salads. I also liked the fact that they did not scrimp on their ingredients so you know you’re really getting what you’ve paid for. And it’s truly a good value for your money too because the salads really taste fantastic! I hadn’t realized eating healthy could also be eating something as delicious as these salads.

Upgrade your favorite instant food with these recipes

Admit it, more often than not, what you have in your pantry would be hassle-free instant food. As any person who’s lived independently (ahem, alone) knows, they’re pretty painless and require minimal to no cooking, which means not only do you get to eat faster, but also lessen the potential damage you can inflict on your kitchen.

But hey, eating shouldn’t just be about filling your stomach, good food can work wonders for the soul – and your ego – since you’re actually going to do this. A quick scan through The Maya Kitchen’s trove of recipes has provided these 3 simple ways to transform your instant meals into tastier, healthier, and over-all, fancier dishes. Yes with some creativity, you can level up your meals.

From canned tuna to Italian sandwich! This Chili Corned Tuna Salad in Panini Toast provides a yummy twist to your canned staple. And you can do this in just 3 steps! Start by mixing drained corned canned tuna with celery, onion, pickle relish, mayonnaise, chili powder, salt, and pepper in a bowl. Lay thin cuts of cucumber and red onion on top of a slice of toasted batard bread. Lastly, spread the tuna salad mixture onto the bread. Enjoy it by yourself or share the hefty servings!

Email ThisBlogThis!Share to TwitterShare to FacebookShare to Pinterest
Labels: How to Level Up your Instant Food, Instant Food Upgrade, MAYA Happy Mug Cakes, The Maya Kitchen 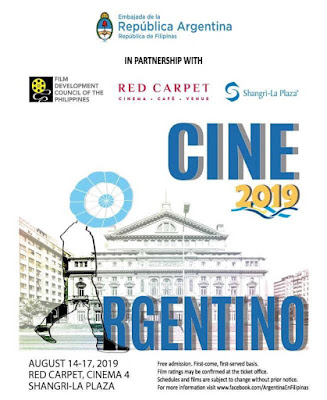 One of the most anticipated film festivals, Cine Argentino makes a return at the Shangri-La Plaza’s Red Carpet Theater. Now on its fifth year, Cine Argentino 2019 is slated to happen from August 14 to 17, 2019. This Argentinian Film Festival was made possible through the partnership between the Film Development Council of the Philippines and the Embassy of Argentina and Shangri-La Plaza.

For this year’s edition, the Cine Argentino 2019 will be featuring five diverse films produced by recognized Argentinian filmmakers that vows to showcase different perspectives of Argentina’s culture. The said film festival shall be having the biographical crime film El Clan [The Clan] starring Guiliermo Francella and Peter Lanzani as its opening salvo for this year’s Cine Argentino. Written and directed by Pablo Trapero, the film is based on the true story of Puccio Clan, a notorious family known for kidnapping and killing people during the 80’s. The film narrates the rampant “disappearances” even after the Argentina’s military dictatorships. This film was a runaway winner which has garnered five citations in 2015 from the Argentinian Academy, including Best Cinematography and Best New Actor [Lanzani].

Vance
I'm part of the digital marketing trio EchoManila, a web dev and branding provider where ideas meet possibilities. You may check out our website at www.echomanila.com