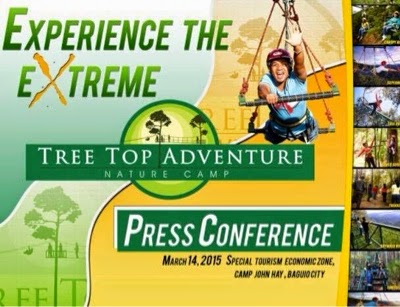 The program was graced by Tree Top Adventure’s CEO Ms. Ma. Camille O. Montejo. A short program was presented with a question and answer portion before they proceeded with the tour in which the participants were able to try all the rides. They had also tried the only motorized team building facilities in the Philippines.

Tree Top Adventure features six activities: two slow paced and four fast paced activities. One slow paced activity is the Trekking adventure in which you’ll be toured within the area. The tour guide will be introducing local plants and trees and share interesting facts about them.  If one wants to see the forest and appreciate nature from the top of the trees, they could try the Canopy ride. The entire ride has a hanging bridge and five stations which can carry three persons at a time in which you’ll be transferring from one tree to another. For heart pounding activities, one might want to try the Superman Ride, a horizontal motorized zipline in which you’ll be soaring back and forth in less than a minute. Another activity you could try is the parachute fall in which you’ll be going upwards, slowly, and when you’re 75 feet above the ground, you’ll suddenly fall. If you literally want to surf in the air, you could try the Silver Surfer, an inclined zipline that swings you back and forth between two trees. If you want to experience the extreme, we recommend you the Tree Drop in which you’ll be suspended 60 feet above the ground, mission impossible style and you’ll be dropped in a matter of seconds only.

Tree Top Adventure also offers the only motorized Team Building facilities in the Philippines in which participants would be challenged physically, mentally and even emotionally.