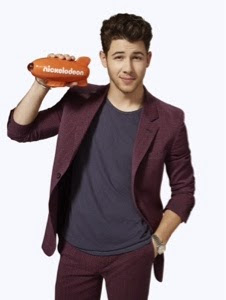 It's that time of the year again where Nicksters (legions of Nickelodeon fans) from around the globe would once again cast their votes for their favorite artists who will vie for that coveted orange blimp award. This year, multi-talented singer/songwriter and actor Nick Jonas was tapped to host the upcoming Nickelodeon’s 28th Annual Kids’ Choice Awards (KCAs), live from Los Angeles’ legendary ‘Fabulous’ Forum on March 28. The show premieres on March 30 at 6:00PM.

Nick Jonas went solo in his career after his two older brothers (of the Jonas Brothers fame) had their individual respective careers as well. He had released his debut self-titled solo album last year via Island Records. The album’s double-platinum smash single “Jealous” soared to the No. 1 position on the U.S. Radio charts, and peaked at No. 7 on the Billboard Hot 100 which set the tone for his sultry second U.S. radio single “Chains.” While recording, he was also shooting the gritty television show Kingdom, which was picked up for two additional seasons on DirecTV’s Audience Network. Showing no signs of slowing down in 2015, Jonas will be joining Iggy Azalea on her Great Escape tour this April, and will also appear in FOX’s upcoming horror comedy series Scream Queens.

For those who are not familiar with the Nickelodeon’s Annual Kids’ Choice Awards, it is a celebration of kids’ favorite stars across the worlds of film, television, sports and music which is now on its 28th year.  As only Nickelodeon can, the Kids’ Choice Awards offers a front-row seat to stunts, slime and celebrities. Additional performers and presenters will be announced in the coming weeks.