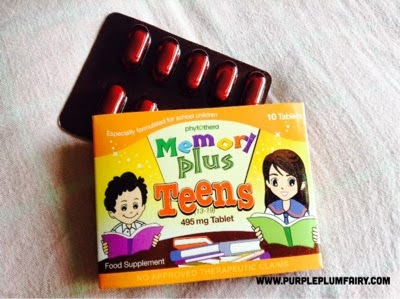 It's almost the end of the school year and students are frantically scribbling a semester’s worth of information onto a page for the upcoming final exam where a sharp memory becomes very, very important. As parents, we try our best to help our teens to improve their memory retention. We are quite familiar with the art of studying. Not only from our experience as students, but also as tutors. Along the way we’ve met countless students who are certainly not ‘dumb’ – quite the opposite in fact – but regularly struggle to get good grades. It all goes down to having the right attitude towards studying, perseverance and good study habits. Food supplements also does its part in helping out to improve one's memory just like Phytothera's Memory Plus Teens.


I have been hearing good testimonies about Memory Plus for Teens  (for teens 13-19 years old) but I was quite reluctant then to make a purchase because I thought it was made of synthetic ingredients. However, I later found out it is all natural so I had finally decided to buy the product so that my lanky teenager Kyle could start taking this as supplement. Plus a friend's teenage daughter testified how her memory has been enhanced by Memory Plus for teens and that this made her perform very well in all her exams.  So as a parent, I'd also like to try it on Kyle.

*Bacopa Monniera to help facilitate learning acquisition and information retention. It's also been proven to promote recovery from stress and anxiety.

* Centella Asiastica, a circulatory herb that helps stimulate blood supply and oxygen uptake to the brain. Of course, we all know that our brain needs oxygen supply in order to function well.

* Lechitin which contains brain-specific phospholipids (a biochemistry) that supports nerve cell structure. It increases the levels of acetlcholine (a brain chemical involved in memory) that conducts nerve impulses within the brains, leading to improved memory and learning skills.

*DHA or Docosahexaenoic acid (DHA) is an omega-3 fatty acid that is a primary structural component of the human brain, cerebral cortex, skin and retina. The omega-3 fatty acids stimulate brain and visual function.

Kyle is naturally forgetful and out of focus--traits he got from his innate ADHD. He's had so many forgetful moments. There were times when he'd left his lunchbox or textbook at school due to forgetfulness. The bad part is he would be missing out on school deadlines or would resort to cramming a lot just because he had forgotten the submission dates for school related projects.

It had taken me three months to write this honest product review for Pythotera Memory Plus Teens. After three months of taking Memory Plus Teens once a day, Kyle's memory has dramatically improved. It is now obviously sharper. He recently had to play the role of King Salermo in the school adaptation play of Ibong Adarna for Grade 7 students. Playing a role requires one to memorize very long lines. I'm thankful to Pythothera Memory Plus Teens because Kyle was able to memorize his script without any hassle at all! I also noticed he is more active and happier. He even told me he could now comprehend much better the books he is reading. I really felt so happy for him.

Disclaimer: I am not compensated for this post. Opinions expressed are 100% my own.
Posted by Vance M. Ramos at 10:17 PM