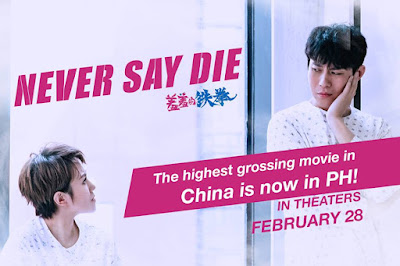 Never Say Die is about a body-exchange comedy. One might say that the concept isn't really something new to the movie audience but do not judge the film yet. It does have a lot of other components which may be fresh to the movie goers' eyes. Chinese actors Ai Lun (Edison) and Ma Li (Xiao Xiao) brings to you a mixture of all the elements which you love in a Chinese film; Action, RomCom and Supernatural all into one memorable movie. The film is said to be the highest-grossing in China in 2017 with a whopping US$334 million recorded in the box office.

Never Say Die is about a boxer and a journalist accidentally exchange bodies after they are struck by current, embarking a series of adventures. The new comedy stars most of the cast members of Goodbye Mr Loser, the troupe's highest-grossing movie and the first movie adapted from one of Mahua's theater plays.

Directed by Yang Song & Chiyu Zhang, the film is an adaptation from a stage play produced by Happy Mahua Pictures, a popular comedy troupes following the success of Goodbye Mr. Loser which incidentally also starred the two.

For a glimpse of Never Say Die, please watch this trailer video of the said film:

Watching this film will surely make you feel good and entertain you. Who knows, it might just awaken the Chinese film buff in you. Distributed in the country by Creative Products Corporation and released by Star Cinema. Never Say Die is showing in cinemas nationwide starting February 28, 2018.

See you in theaters!