Filipino Rap & Hiphop record producer, songwriter and artist, D-Coy.
The name D-Coy may not exactly ring a bell for most Filipinos especially those who aren't into anything hip-hop and rap music. But if you're one true Pinoy rap fan,  for sure, you're not only familiar with D-Coy but also a fan of him. D-Coy's known for his creative lyrics with significant serious message. D-Coy a.k.a. Wakin Bordado is one of the most respected rappers in the country today. He was one of Andrew E.'s prodigy and became one of Dongalo Wreckords' first rap artists. D-Coy later joined Chill's Electric Chair Entertainment and now he's part of Madd World Entertainment.  Since then, D-coy have produced several albums for different artists and also for his solo albums. D-Coy is now CEO of an independent recording label called W1KA RECORDS where amazing Tagalog rappers and arrangers are pooled
Meeting D-Coy in person was such a cool experience for my blog contributor Norma Galera. The rapper extraordinaire and record producer indeed had an innate knack for speedy rhymes in the vernacular and he knew he's gifted with such gift of gab. D-Coy's very passionate with his craft. He practically breathes hip-hop--from the way carries himself to the way he speaks, one would surely know, this guy ain't ordinary--he's got gray matters.
According to D-Coy, he has tried using different aliases since he's started. Unfortunately, none of those aliases really caught on. People who knew him just wouldn't stop calling him Cocoy (derived from his real name, Nikusheen) "That name kind of stuck but I've changed it to D-coy to have a more hip-hop touch," said D-Coy. 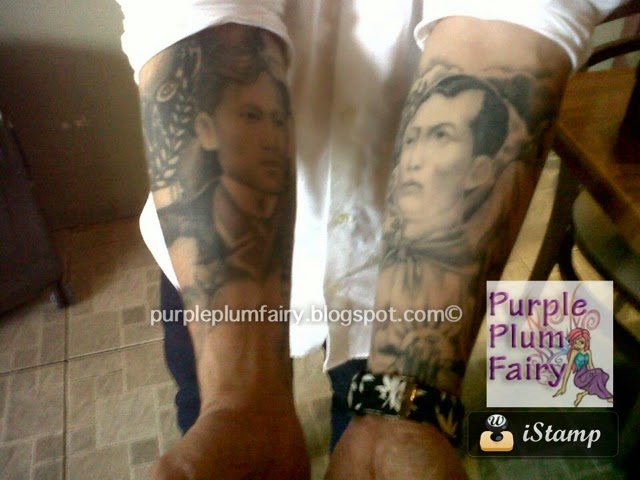 D-Coy gamely showed Purple Plum Fairy's regular contributor writer, Norma Galera the tattooes on his wrists with Philippine National Heroes Jose Rizal and Andres Bonifacio.
Before becoming the rapper extraordinaire that he is, he was just a simple guy from Sucat.
"Seldom do I go out. I actually came from a conservative neighborhood," D-Coy relates. "I started out as a dancer before I got into writing songs," he added. It was in the year 1995 that D-Coy has entered the music scene when he met Filipino master rapper, Andrew E. D-Coy's life has turned 380 degrees since he collaborated with Andrew E. and since then he has never looked back. It has completely changed his lifestyle, he has gotten really busy and spends less time for his family but he isn't complaining for this is what he had wanted all his life--share his music with everyone.
"Contrary to the belief of others, hip-hop and rap are more than just music. For me, it's a way of life. It's not a fad. It doesn't mean that because you're wearing baggy pants, hip-hop ka na. It's a culture. People say Filipinos have no right to get into hip-hop because they're not black. But we are adapting the music and the culture, hindi ‘yung pagiging black nila," D-Coy explains.
His passionate about his craft and he's pretty much outspoken about it. He gets frustrated with the emergence of commercial hip-hop artists. "We've been doing this for how many years now, trying to show people what hip-hop is all about, tapos biglang may lalabas na nagpapa-cute-cute lang. There are a lot of hypocrites—people who are using you, people who take advantage of you. But you have to do it because you survive. I've had spats with friends because of money, fame and popularity, but that's not what I'm after. I'm here (in the industry) and doing this (hip-hop) because of my love for the art."
He wants to debunk the misconceptions about his music. "It's a bit sad that some people think of hip-hop, they'd instantly think of anything violence, drugs or gangs which is really unfair. When I rap, I give situations, then I give solutions to these situations. I might not be as popular as other people but I want people to remember my songs—that in some way they helped, that in some way they were able to make a difference."
He also talks about the dilemma of the struggling rappers. "It's truly difficult to reach out to the public and have people appreciate you and your music without sacrificing your artistry. It's really hard to be accepted and appreciated. Number one, because of piracy. And number two, because my music is hip-hop. Not every recording companies believe that hip-hop has a market. In fact, some radio stations don't want to play hip-hop," says  D-Coy.
D-Coy had just wrapped up his 2nd solo album entitled W.I.K.A (THE BLACK KATIPUNERO ALBUM) elevating the tagalog rap scene in the country and pulling off an image of a nationalistic poet through his songs and image as where he inked (tattoo) on his both arms the words, makatang (poetic) mandirigma (warrior). 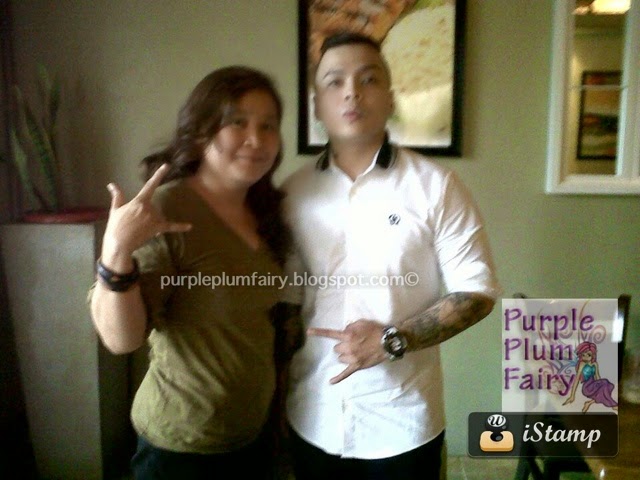 Purple Plum Fairy's blog contributor, Norma Galera with D-Coy.
D-coy takes everything in stride and believes that he was really meant to make music. "I think this is what I know. This is what I can do." He says he doesn't intend to rap forever, yet he knows music will always be a part of his life. "Maybe by that time I'll have my own company or record label. I want to produce albums."
His ultimate dreams reflect his deepest passion. "I want the hip-hop scene to be recognized. I'd like to have my own record label to help other artists."
All the twenty (20) tracks from his latest album has different fusions of other genres that are well mixed with all the elements of Hip-hop (DJ, urban beats, beat boxing, rapping of course and so forth). His 1st single would be his song WIKA featuring Artstrong, this song is a fusion of Hip-hop and Reggae beat. Other songs like USOK featuring ASIN fusion of OPM Classic from Asin and hip-hop, TADHANA a fusion of boss a-nova and RnB,HANGANG SA HULI feat. REY VALERA (OPM LEGEND),BAKBAKAN NA featuring Slap Shock a fusion of hardcore rock music and hip-hop rhythm.Also in the album featured are Lourd Of Radioactive Sago Project and Another Street Banger"D-Mutha Fuckin Coy" and SASABOG NA!!! is Produced by Dash aka Migthy Joe Young,The Monsterous"Sino KA???!!", 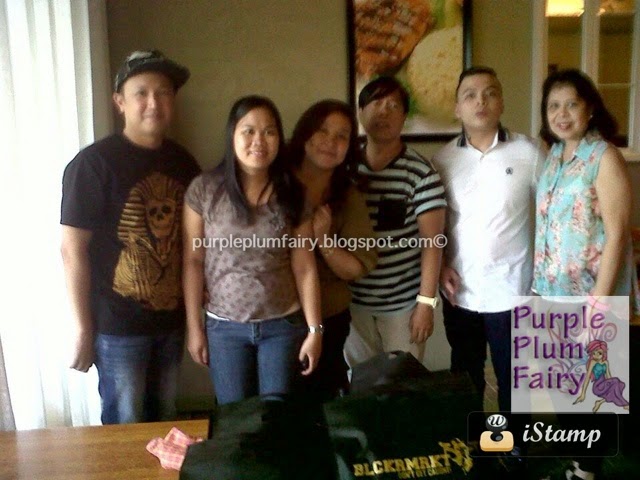 D-Coy in white shirt with bloggers Rizza Garingo, Norma Galera and Myrna Roman during a blog conference.
Here are some of the albums D-coy have produced: Recognize All Stars Loob at Labas.. distributed by Warner Music year 2000, his first solo album, D-coy A.K.A W.A.K.I.N "Plastic Age" EMI music year 2001, Aikees first album, Aikee "Bawat Bata" ALPHA RECORDS year 2003, and MaddWorld Files Iced Out ,2006..
CHECK OUT the link W1KATV:http://www.youtube.com/user/w1katv?feature=mhee D-COY, and WIKA ARTIST's MUSIC VIDEOs AND BLOG...
In the future, D-coy has words of inspiration for aspiring rappers. "Persevere and be patient. Wait for your time to shine. The time will come where all your efforts will be all worth it."
For Bookings, Shows, Events,Concert and MUSIC PRODUCTION...
Contact Us @ WIKA HOTLINE..
02-9988624... or email us @ wika_on@yahoo.com
Hometown MANILA, PHILIPPINES
Record Label WIKA RECORDS
Awards Accomplishments:
★Philippine Representative at the First Asian Hiphop Festival Singapore
★Philippine Representative at Mosaic Festival Singapore
★2009 Most Promising Artists in Asia “Junk Magazine Awards” (Malaysia)
★2009 Best Rap Artist Awit Awards
★2009 Best Music Video of the Year (Pambansang Kamao) PMPC Star Awards for
Music
★AVIMA 2010 Music Awards (Asia Voice Independent Awards) “Gold” Best Hiphop/
Urban Solo
★2011 The New Ambassador for Peace (Office of the President Advocacy for Peace)
D-Coy's own fluid poetic music creates a universal language that all hip-hop heads know in their hearts. A master puppeteer that can make the crowd jump and scream his name at any given moment through his vindictive style of verse. I won't be surprised if one day, D-Coy's name will become a household word for everyone.
Disclaimer: I am not compensated for this post. Opinions expressed are my own.
Posted by Vance M. Ramos at 4:20 AM