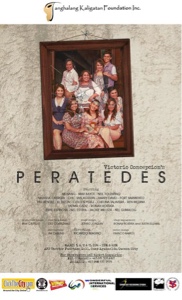 In its Filipino adaptation, “Peratedes,” the prodigal son of the family Peratedes, an upper-middle-class family, Erik, returns for the wake of his youngest brother, Alfredo. The death, in which, he was responsible for as blamed by Dolores, the matriarch of their family. Due to the hate and resentment of the family, he runs away from home and tries to leave behind the people that he once called family. Over time, the absence of the youngest son becomes the strong force that pulls the family secrets into the open. And one by one, the family begins to realize how difficult it is to understand what a family should do and what each of them have to contribute to their own sufferings.

Click here for a summarized version of this show.For more information about that’s happening in the Manila theater scene, please view our Theater Calendar.