Mar Roxas: The Father of BPO Industry in the Philippines 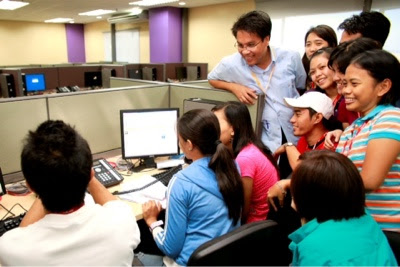 Business Process Outsourcing (BPO) is arguably one of the most prolific industries you can join once you enter the Philippine workforce.

The Philippine Information Technology (IT)-BPO industry actually unseated India as the call center capital of the world – a sign of bigger things to come in the next few years. Experts project industry revenue to reach $25 billion by next year and it might even reach $55 billion by 2020. Around 1 million people are currently employed by IT-BPO companies and the figures continue to grow.

Not a lot of people know that Roxas, formerly known as "Mr. Palengke” is also another local political figure that set the stage for the country’s dominance in the outsourcing industry.  Roxas  is responsible for the rise of the BPO industry in the country. It was during the late 90's when then Senator Mar Roxas recognized the potential of the BPO industry in the country and helped lobby in congress for Relublic Act 7916 so that buildings could be registered as an ecozone and thereby exempt BPO companies from paying national and local taxes. This was the very reason that attracted multinational firms to invest and outsource their firms in the Philippines.

At the time when Roxas was the secretary of the Department of Trade and Industry, he conceptualized  and made true his vision of making the country the hub of BPO offices despite the 1997 Asian financial crisis. This was the very reason that attracted multinational firms to invest and outsource their firms in the Philippines. It also led for President Aquino to hail Liberal Party (LP) standard-bearer Roxas as the "father of business process outsourcing industry in the Philippines " now that the BPO industry's revenue is nearly $25 billion. 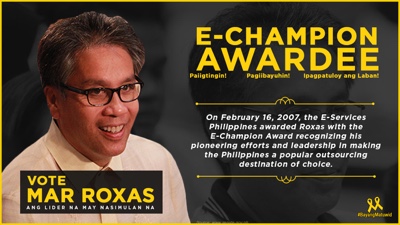 "In the middle of the Asian financial crisis, Roxas scrutinized what seemed like a grim economic landscape and saw potential in the union of our countrymen’s talents and sector,” President Aquino said during the 7th annual International IT-BPM Summit in 2015.

Roxas also reached out to industry leaders, and through the ‘Make IT Philippines’ strategy, aggressively marketed the Philippines as a destination for investments in this sector… None of this, was done for his personal gain or glory. Everything that Roxas did, he did to facilitate the growth and the progress of Filipinos.
In an interview, Roxas also expressly asked his family (the Aranetas) not to apply in the eco-zones, which is why Cubao in Quezon City was one of the last places to be developed as a location for the IT-BPM industry.
The industry then recognized and dubbed him as Father of the BPO Industry and thus in 2007 was given by e-Services Philippines the E-Champion Award. 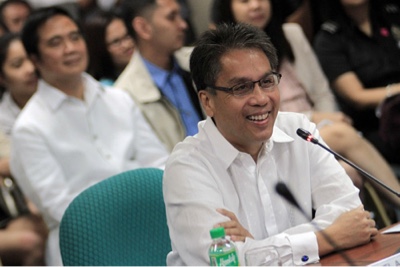 It was during the term of former President Ramos’ when the. Philippine Economic Zone Authority (PEZA) was established and paved the way for foreign IT-BPO firms to set up operations here in the Philippines. Under PEZA’s Special Economic Zone Act, listed Economic Zone’s such as IT Parks, under which IT-BPOs are classified, are to receive adequate support for infrastructure and tax holidays making the Philippines a very attractive IT-BPO hub for foreign investors.

IT-BPM industry soon became such a driving force in the local economy, where jobs are generated not only in the major cities but also in the countryside.
The Philippine IT-BPO industry would never be a success without its 1,000,000 talented employees. Known for their excellent English-speaking skills, work ethic, and patience when it comes to handling customers, Filipinos were bound for success in the IT-BPO industry. The sector is still growing and with various companies’ strategies for talent acquisition and retention, such as wellness programs and higher salaries, the future of the industry looks positive.
“We want to replicate this kind of success in each and every sector, and in the entire economy. In this endeavor, as with all others, it is our single most important resource, the Filipino people, who will propel us to greater heights,” said Roxas.
With all of the good that the IT-BPO industry has brought to our economy, it’s valuable to know the people who helped establish the industry as well as the entities that have molded it to be the success that it is now. And with the rate of growth that the industry is enjoying, there's really no other way to go but up. With Mar Roxas at the helm, I could only see a brighter future not only for the BPO industry but also for the Philippines as an entire nation.
Get the latest from Mar Roxas and become one with the Bayang Matuwid through the following social media accounts:
Bayang Matuwid’s site: bayangmatuwid.org
Facebook page: facebook.com/BayangMatuwid
Twitter: @BayangMatuwid
IG: @BayangMatuwid