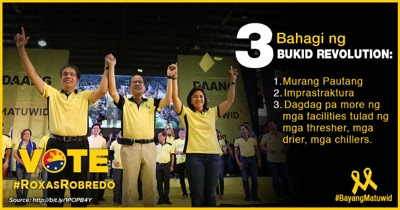 Liberal Party standard-bearer Mar Roxas has started its grassroots level campaign to discuss what he coined as “Bukid Revolution” to farmers and fishermen to properly address the need for farm-to-market roads, financial support and irrigation to further improve production. Roxas listened to the litany of farmers, seed producers and cooperative members during a meeting held at his grandmother's (Trinidad de Leon, wife of former President Manuel Roxas) hometown in San Miguel, Bulacan.

This is just one of the many programs he mentioned during the campaign kick off.  Bukid Revolution, aims to develop the agricultural sector since it is said that 1 out of 4 Pinoys are farmers or fishermen. 48% of jobs come from agriculture.

One of the developments for Bukid Revolution includes, loans, better infrastructure such as farm to market roads and technology which will have post-harvest and post-catch facilities to keep one's harvest fresh. 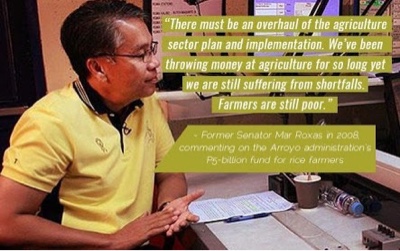 With Roxas' "Bukid Revolution" program, he assured that the funding and post-harvest facilities as well as the other needs of rural communities will be provided. LP's standard-bearer understands that 30 percent of Filipinos depends on agriculture and fisheries as their main source of income. This is why one of his main goals is to uplift the lives of farmers and fishermen as an integral part of his campaign.
During one their campaign sorties, Roxas and running mate, Leni Robredo also met with the multi-sectoral leaders at the Bulacan Agricultural State College in San Ildefonso. With local farmers and heads of cooperatives as audience, Roxas presented his platform to improve the production capability for the agriculture sector. 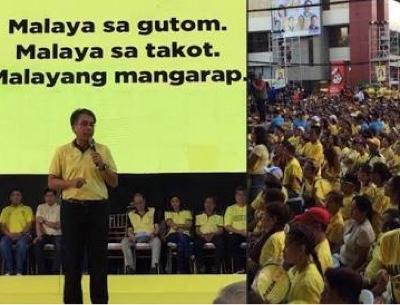 Roxas explained that if elected president, he would push for the implementation of what he described as three essential elements in maximizing the assistance to those in the agriculture sector.
As part of his plans, he said he would provide low-interest loans to small farmers and fishermen so that their earnings will not go to huge interest payments and amortizations.
Then, he said that the farm to market roads, bridges and other infrastructures would be constructed or repaired so that the farm produce could reach the market on time and still fresh.
He also said “post harvest facilities” like dryers and chillers would be put up to keep the good quality of products and ensure its competitiveness.
“That is our ‘Bukid Revolution,’ which would lead to improved earnings for our small farmers and fishermen. As I’ve been saying, no one should be left behind in our march to a brighter future,” said Roxas. 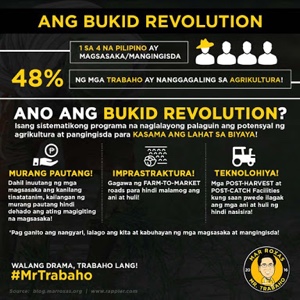 The agriculture sector, one of the government’s priorities for developments, received  P85.63 billion allotments for Agricultural Development Program in 2015.
Roxas said many people, particularly those who live in poor provinces, largely depend on farming and fisheries for livelihood.
“That is why we need to strengthen all developments projects that this government has started and promote inclusive growth by maximizing the country’s agri-business potentials,” said Roxas.
“The development programs under ‘Daang Matuwid’ are anchored on the success of every Filipino family,” Roxas added.
But more importantly, Roxas said he would push for the implementation of the Bottom-Up-Budgeting (BUB) wherein more than P100 billion will be allocated each year for the local government units on top of their Internal Revenue Allotment (IRA).
Unlike the past policy wherein it is the local and national officials who determine what project would be implemented in a community, it is the local residents, with the assistance of the local non-government organizations who will determine the projects and programs that they would want to implement in their community.
The BUB allocation for each town and city, down to the barangay level, depends on the population at P1,000 per person. If a barangay has 20,000 population for instance, it will automatically receive P20 million every year from the BUB.
Meanwhile, Roxas said he knows how it feels to be a victim of electoral fraud as he insisted that he was cheated during the 2010 elections.
This is the reason, he said, he would never engage in such illegal activity and in fact, would join the Filipino people in ensuring the peaceful and credible conduct of the 2016 elections.
For more information and updates on Liberal Party standard-bearer Mar Roxas and running mate Rep. Leni Robredo, follow Bayang Matuwid on their social media accounts:
Bayang Matuwid’s site: www.bayangmatuwid.org/
Facebook page: www.facebook.com/BayangMatuwid/
Twitter: @BayangMatuwid
IG: @BayangMatuwid