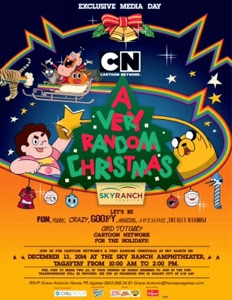 Exactly twelve days before Christmas, Kyle and I were invited by Cartoon Network, the number one kids' channel in the Philippines to an afternoon of awesome fun, games and adventure to Tagaytay with A Very Random Christmas at Sky Ranch. The said event was free admission and open to the public. And since it was held on a weekend (December 13 and 14), families, relatives and friends were present to join in on the fun treat. 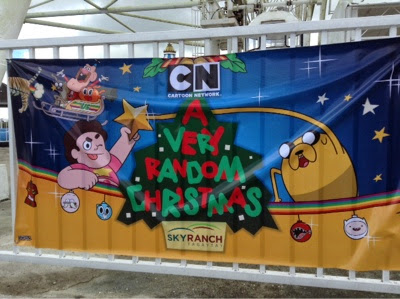 Although Kyle and I had been to Tagaytay a couple of times,  it was the first time for us to visit Sky Ranch. For those who are not yet familiar with it, Sky Ranch is actually one of the newest theme park in the country. It has become a must-visit destination when one visits Tagaytay City. Sky Ranch is known for its Sky Eye--said to be the highest ferris wheel in the country, giving one a breathtaking view of the Taal Volcano. Thus, Sky Ranch is the perfect venue for family activities such as Cartoon Network's A Very Random Christmas. 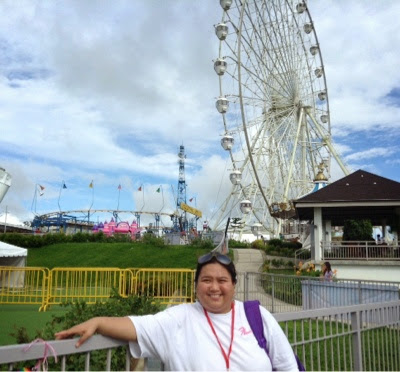 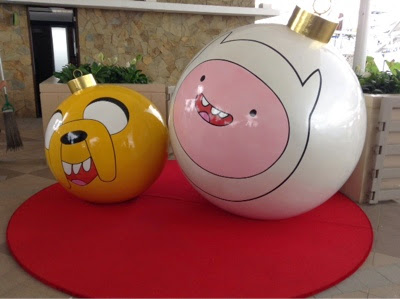 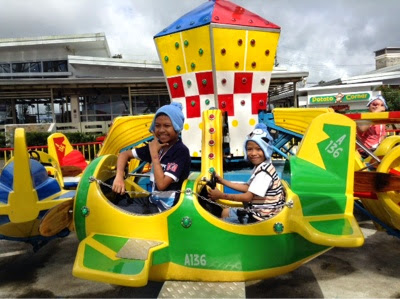 Going back to the said event, on our way to Sky Ranch, the rain poured down. But we were blessed that by the time we had arrived in Tagaytay, the sun had began to shine again. From 10AM until around 5PM, guests had experienced numerous fun activities, on stage and booth games, mascot appearances featuring Cartoon Network's favorite characters from Adventure Time, Uncle Grandpa, Ben 10: Omniverse, The Amazing World of Gumball, Santa also graced the said festivity with a marching band to boot and a whole lot more! 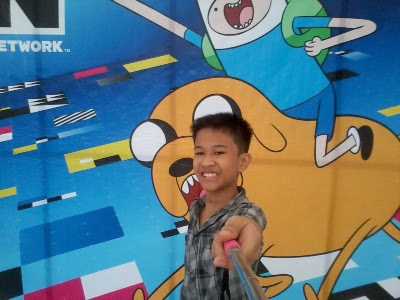 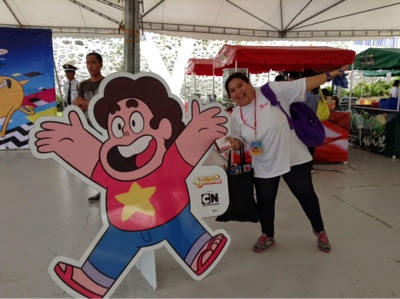 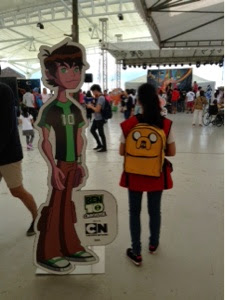 The cute Adventure Time backpack from Cartoon Network that was given away to Cignal subscribers. 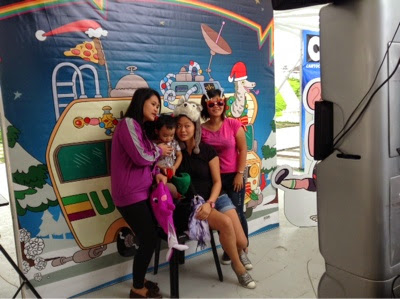 
Kyle and I also enjoyed our ride-all-you-can-pass. We went for the Sky Eye Ferris Wheel.  Words aren't enough to express my awe for such a breathtaking view of Taal Volcano. There was also piping music to somehow ease those people who are afraid of heights.(Luckily, I'm not one of those and neither is Kyle). Each gondola at the ferris wheel is air conditioned. We tried to ride in every attractions there is, except that I had passed on Vikings (I had experienced riding such more than a decade ago and I think I'm old now for such)--which my beloved Kyle bravely hopped into it on his own. It was his first time on the Vikings, I saw him turn a bit pale while he's onboard the large ship and it's been swinging back and forth. His color only returned a few minutes later after the ride was finished. I thought he would throw up, it was a good thing he did not. My baby indeed has grown up because he could very much manage to be on his own sans my help. He seemed to have enjoyed his Vikings ride because right after getting off the huge ship, he had been asking again for my permission to try it out for the second time, but I had to beg off. 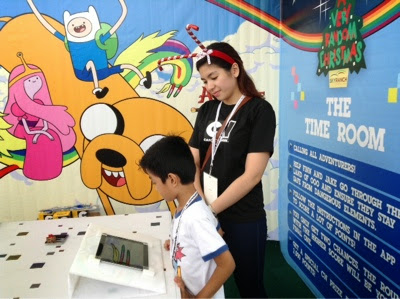 B Hi-tech gadget games were also made available. 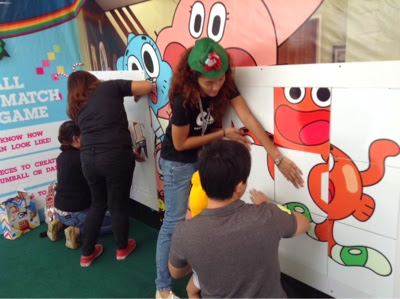 Father and son tandem at the puzzle booth game 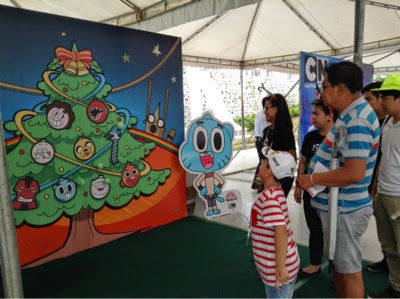 A child tries his hand on the game booth 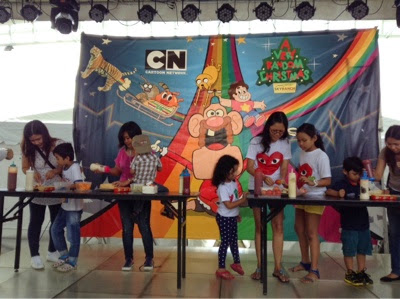 Mom and child tandem during a hotdog sandwich making contest 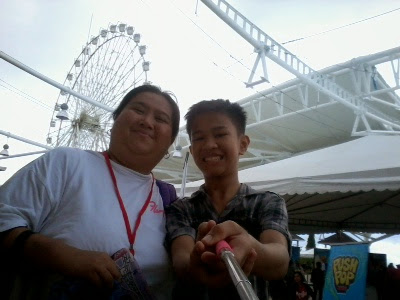 Since I've just acquired my monopod, Kyle had been using it the whole day. He would do selfie in all of the rides, even creating a video while we were both onboard a small roller coaster. Kyle also did not hesitate to join the on-stage games where he won for himself a Chill Factor Ice Cream Maker. There was also a free photo booth where we were given cute magnetic photos. Kyle onboard The Vikings Ride 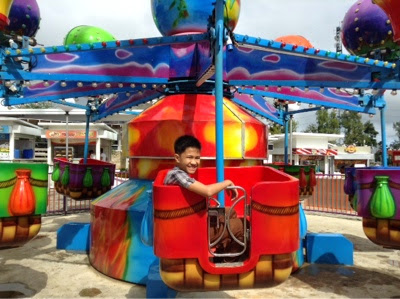 Kyle enjoys one of the ride 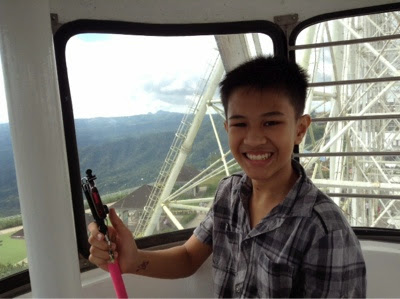 Kyle with my monopod at the Sky Eye Ferris Wheel Gondola 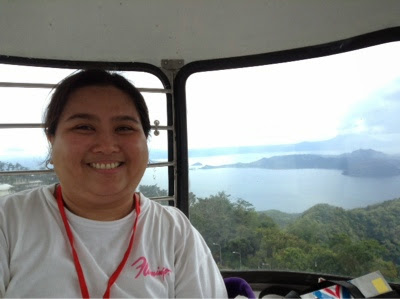 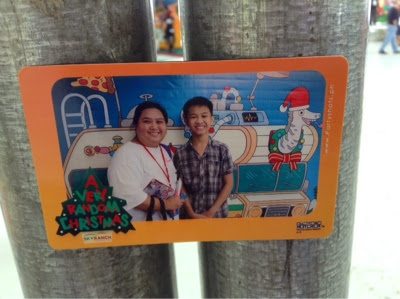 The lovely magnetic photo we got from the photo booth.

Special treats were also given to new and existing subscribers of Cignal. First 60 subscribers were given the chance to Meet and Greet the mascots at the designated photo opp stations. Lucky new Cignal subscribers also walked away with special reversible Adventure Time backpack. 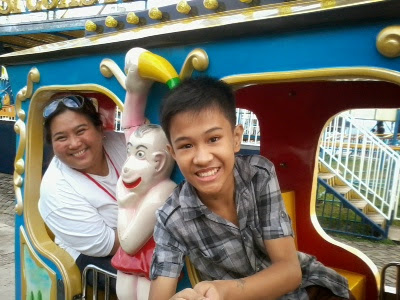 Overall, the Cartoon Network's A Very Random Christmas was indeed one great family event this holiday season. We truly had had a fun afternoon which I know Kyle will cherish for years. We had a great bonding as we spent time together creating wonderful memories. Thanks to Cartoon Network and its PR arm, Havas PR Agatep, Turner Philippines and Sky Ranch for one memorable and awesome afternoon of fun. 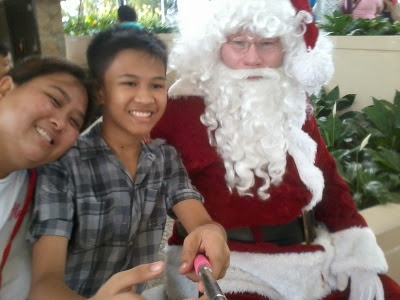 Kyle and the author doing a selfie via monopod with Santa


Pile up on more exciting adventure this Christmas on Cartoon Network. For further information about A Very Random Christmas, please visit www.facebook.com/asia.cartoonnetwork or www.cartoonnetworkasia.com