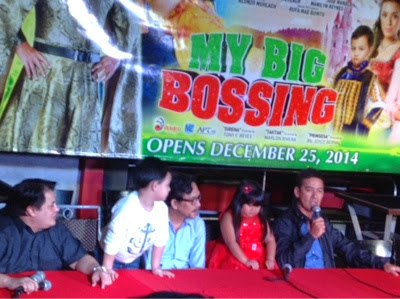 Growing up, I remember looking forward to the month of December because of two things: Christmas and Metro Manila Film Festival (MMFF). As a young child, I knew that it's the only time when cinemas are given two weeks to showcase Filipino-made movies exclusively. I've always looked forward to it especially the fantasy films with heartwarming themes just like Vic Sotto's MMFF movies. Who could forget the classic "Okay Ka Fairy Ko" where the "Enteng Kabisote" character and its series came to life? Now that it's MMFF time again, of course, producer/actor comedian Vic Sotto definitely had something for the entire family via My Big Bossing, produced by M-Zet Films (which Sotto owns) and APT Entertainment together with its distributor Octo Arts Films. 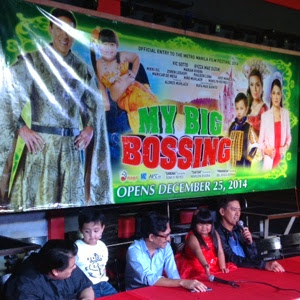 "I like to come up with something that appeals to the masses, particularly to the kids," says Vic Sotto during the My Big Bossing blog conference held recently at Guilly's Island in Tomas Morato. "We've been through a lot each year, so in my own way, I'd like to bring them smile and laughter, something to be happy about. That's why I produce entertaining films each year. I want everyone to have fun and feel the holiday season." "I always consider kids because I also have my own kids and grandchildren as well," added Vic.

"This is a big-budgeted film," stresses one of the film directors Marlon Rivera. "It's like making three different films since for a change we're making a comedy anthology. We have three episodes namely Sirena, Taktak and Prinsesa. All these appeal to the movie goers." 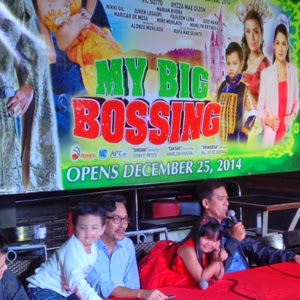 My Big Bossing stars Vic Sotto, Marian Rivera, Ryzza Mae Dizon, Niño Muhlach, Pauleen Luna, Nikki Gil and Zoren Legaspi. It also introduces the son of Niño Muhlach who might just be another child wonder in the making, Alonzo Muhlach. My Big Bossing was helmed by three different award-winning directors as well: Sirena episode was directed by Tony Reyes, Taktak by Marlon Rivera and Prinsesa was done by Joyce Bernal.

Ryzza Mae Dizon, known as Aling Maliit by Eat Bulaga's Dabarkads, was asked during the Blogcon on whose company she enjoys more, if it's Bimby (James Aquino Yap Jr., her former leading man) or Alonzo Muhlach, Ryzza uttered: "I want to keep my private life private."  And it had received a lot of laughter from the bloggers' group that night. Ryzza, at her tender age surely knows how to draw the crowd yet give a rather 'safe' showbiz answer. 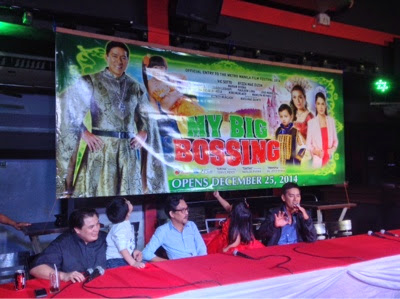 Alonzo, on the other hand is also a delight to watch. In fact, during the My Big Bossing blogcon, he gave us a sample of his dancing skills when he gamely stepped on the table and showed us some groove. Niño, his dad simply supported his son seeing that the child is enjoying what he does. "Showbiz wasn't something I've implied. Being interested in showbiz came out naturally in Alonzo. But during my time, it was different. I'm just a proud Dad," gushes Niño as he talked about his son Alonzo.

Ryzza Mae Dizon relates, "I was challenged a lot in doing My Big Bossing. I had to learn how to swim properly since I've played a mermaid in the Sirena episode. In Taktak, I'm somewhat scared because I wasn't used to all the prosthetics used and in Prinsesa, it's so difficult to look 'pretty'!" Again, with such witty statements, Ryzza Mae brought the house down with laughter for the second time!

Among all the entries for this year's Metro Manila Festival which is now on its 40th year, My Big Bossing is bound to capture the hearts and attention of the entire family because it guarantees fun, heartwarming stories of fantasy, horror and moral values--seeing My Big Bossing alone is like seeing different films from different genres. It saves you time and money. "Movies are the cheapest way of entertainment. I like seeing families gather this Christmas to come and watch our film My Big Bossing", says Vic Sotto. "A must-see film this Holiday!"

Come and watch My Big Bossing on December 22 at 7:30PM, they're going to have an advance screening with the stars at Cinema 10 of SM Megamall. Do watch out for them during the Parade of Stars on December 23. Regular showing runs beginning Christmas Day, December 25, 2014!