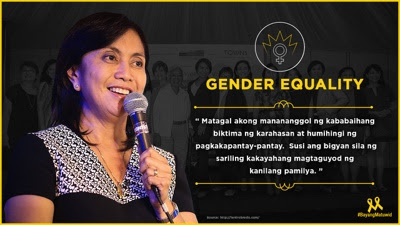 Men are physically stronger while women are more emotionally aware. Men are best suited as providers while women are better nurturers. Of course, there are always exceptions, but these generalizations are relative to our biological origins. We acknowledge the differences between the sexes, but who can say that one is better than the other? They balance each other out. But, in a male dominated world, masculine tendencies are utilized and associated with power. Feminists recognized this and pushed for equality within the sexes. When women finally were able to enter the workforce, they had to prove themselves in a "man's field, often forgoing their feminine qualities, and mimicking male attributes. Now females are born with a disadvantage, not only do they have to ignore their natural tendencies, but learn male behavior to succeed in the workforce. Cultural norms have inhibited advancements in equality often exploited by the media, by supporting the association of submission with women and dominance with men.


Feminist movements, such as achieving the right to vote in the 1920's, and the push for equality in the workforce and education in the 1970's, brought to light, more than ever, the inequalities of the sexes. These movements brought attention to basic human rights; that politics, education, and employment should be equally accessible to the sexes. But as women moved into the workforce, they found that to be successful in their career, they would have to model male behavior.
The Philippines ranked ninth out of 142 countries in terms of gender equality, according to the recent World Economic Forum (WEF) Global Gender Gap Report 2014. As one of the top 10 countries, the Philippines keeps company with high-income Nordic countries, such as Finland, Norway, and Sweden.
The WEF global gender gap index is comprised of 14 indicators measuring educational attainment, health and survival, economic participation and opportunity, and political empowerment. The global gender gap index measures the difference between men and women’s access to resources and opportunities rather than the total level of attainment. For example, the Philippines and Norway achieved the same rank of one indicating virtually no gender gap in secondary education enrollments, despite very different levels of overall enrollment. In the Philippines, 67 per cent of girls and 56 per cent of boys are enrolled in secondary education, compared to 96 per cent and 94 per cent respectively in Norway.
The Philippines’ overall ninth place ranking is driven by high performance on two indicators: education, and health and survival. In both dimensions, the Philippines has achieved the highest rank of one, with virtually no gender gap in literacy rates, primary, secondary and even tertiary education enrollment, and life expectancy.
Gender inequality persists in economic opportunities and political empowerment, where the Philippines ranked 24th and 17th respectively. The Philippines’ ranking for labour force participation was even lower, at 102 out of 142 countries. This is due to a female labour force participation rate of just 53 per cent, which is extremely low compared to a male participation rate of 81 per cent. Women’s participation in paid work is constrained by unpaid domestic and care work, and a lack of productive employment opportunities.
Women’s participation in paid work is constrained by unpaid domestic and care work, and a lack of productive employment opportunities. According to statistics from the Department of Labor and Employment, 30 per cent of working-age women reported that household or family duties prevented them from participating in the labour market. The Philippines’ relatively high WEF ranking arises partly because despite barriers to women’s labour force participation, many women who are able to participate in paid work do access high-status occupations such as legislators, senior officials, managers, professionals and technicians. This likely reflects effective gender equality policies in these particular areas.
Thus, the overall ninth place ranking needs to be interpreted with caution. The construction of the WEF gender gap index masks underperformance in the economic and political spheres where many women are still excluded. Also, rankings of gender inequality are highly sensitive to the indicators used.
While the degree of gender equality in the Philippines, relative to other countries, is debatable, the Philippines has an extensive — and impressive — institutional framework to promote gender equality. The Philippines has ratified key international agreements, including the Convention on the Elimination of All Forms of Discrimination Against Women, the constitution affirms women’s equality with men, and the Magna Carta of Women requires the state to uphold women’s human rights.
The Philippines Commission on Women (PCW) promotes gender equality through a comprehensive strategy of gender mainstreaming and good governance. This likely contributes to the Philippines’ high ranking for education on the WEF index. The PCW utilises gender budgeting and auditing tools to strengthen accountability; implements specific projects, such as the GREAT Women Project to support women’s economic empowerment; supports sex-disaggregated data collection; and conducts research to make laws and policies gender-sensitive. For women able to overcome barriers to participation, gender equality is promoted through the Magna Carta and Labor Code which include temporary special measures.
But further advances in gender equality will require more effective implementation of some legislation, particularly acts relating to child care and women’s economic inclusion, such as the agrarian reform law. Current legislation on labour standards and contracts also needs to be better enforced. Improving the well-being of women requires increasing overall living standards, not just reducing the gender gap. Disadvantaged women need specific attention in a country with high levels of overall income inequality.
The Philippines’ institutional framework offers a good model for the promotion of gender equality. But the Philippines needs to address the key challenges of implementation and enforcement in order to eliminate gender inequality across all aspects of life. 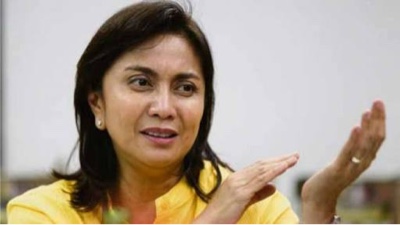 Liberal Party Vice Presidential candidate Cong. Leni Robredo had always been a staunch advocate of women’s rights for decades now, she had actually began her earlier career as an Alternative Lawyer with SALIGAN. She understands that despite the Philippines having one of the best conditions for women economic participation, a gender gap is still very much prevalent nowadays. Abuse still occurs, particularly in impoverished and rural areas.
” Nakikita po namin ang mga babaeng hindi ipinaglalaban ang kanilang karapatan dahil wala silang pinagkukunan ng kanilang hanap buhay hanggang sa binigyan namin sila ng boses sa Naga’s People’s Council at binigyan ng livelihood ang mga kababaihan.”
In 2004, the Violence Against Women and Children was passed which seeks to address the prevalence of violence against women and children (VAWC), abuses on women and their children by their partners (husband, live-in partner, boy/girlfriend, dating partner).
Inequalities, imbalances, and unfair treatment of women at home or in the work place still exist to varying degrees, and can be effectively addressed by a grounds-up community based approach that empowers women economically.
As the lone woman running for Vice President, Rep, Leni Robredo said she will prioritize women empowerment, gender equality and healthcare for women if she wins in the May 9, 2016 elections.  Robredo said that her priority is to empower women by giving them jobs and livelihood so that they can have their own income, help in the family's budget, avoid abuse from their spouse, and provide for their own healthcare. 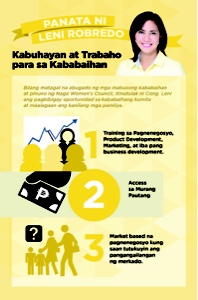 She said that as a lawyer and worker for a non-governmental organization helping the poor, she has a lot of experience meeting with battered women who are forced to stay with the relationship because of lack of empowerment.
She said that there is a need to educate and empower Filipino women so that they can live decent lives and provide for their family.
In celebration of National Women's Month, Robredo said that the women's agenda should be included in the national discourse since half of the population are women.
For updates on Leni Robredo and. Bayang Matuwid, please follow them on their social media platforms:
Bayang Matuwid’s site: www.bayangmatuwid.org/
Facebook page: www.facebook.com/BayangMatuwid/
Twitter: @BayangMatuwid
IG: @BayangMatuwid