I've always had a thing for the environment. I believe that we, as humans had to do our part in preserving Mother Earth. We have to do our share and give all the help that we can. After all, Earth is the only planet that we have and it's our only home. I used to be actively involved in environmental projects and programs when I was still in school. So whenever I get the chance to lend a helping hand to any 'green or environmental-related activities there is, I'd grab the opportunity to volunteer even without thinking twice. Such was what recently transpired when I'd received an invitation to volunteer for Coca-Cola Coastal Cleanup Drive 2014 as part of the celebration of International Coastal Cleanup Day. 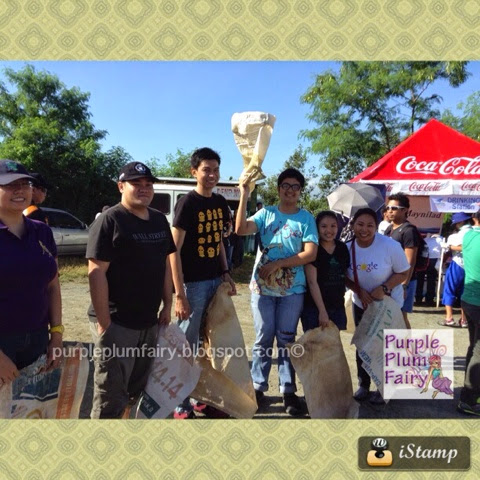 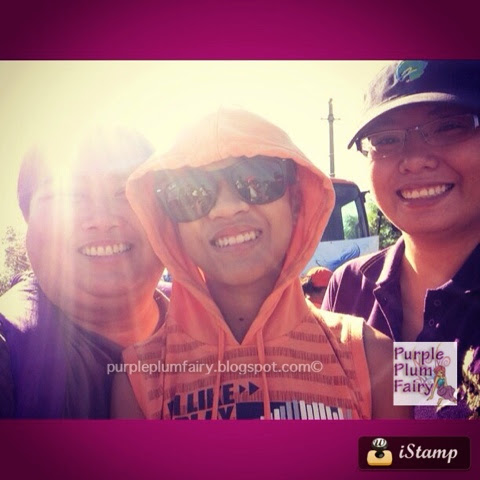 Moi, Kyle and fellow blogger and friend, Dems Angeles
I'd welcome invitations for tree-planting, environmental talks, seminars, conferences or lectures--but I had never tried cleaning up the coast. But as they say, "there will always be the first time." I had tagged along with me, Kyle and blogger friend Dems Angeles of www.demsangeles.com. When we arrived at the venue, I was happy to see other groups working hand-in-hand and by batches in that long coastal stretch of Coastal Road in Parañaque. There were different non-governmental organizations, school organizations such as St. Paul University in Parañaque, private institutions and offices like Philippine Airlines etc. 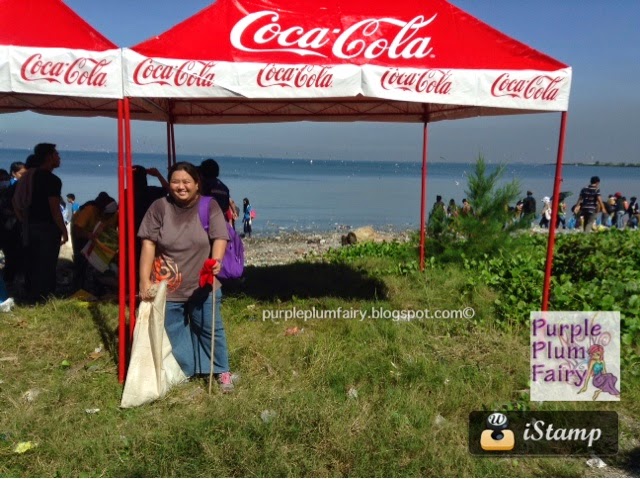 The author with a huge stick to stack up trash and sack, literally drenched in sweat.
We were literally exposed and baked under the debilitating heat of the sun that Saturday morning.  But everyone seemed to be in a high spirit as we shoved, picked, raked and gathered the mounds after mounds of trash from that coastal area. I've began to wonder what the place used to looked like some decades ago. Kyle said it probably looked similar to Boracay. It could've been a perfect place to watch the magnificent sunset that Manila Bay was known for. Sadly, the volunteers weren't enough to completely clean them up. The place actually resembles the old "Smokey Mountain". From used baby diapers to old bags filled with sands to shoes and styrofoam + plastics--name any trash that you can think about, the coastal seemed to have it. Of course, there were the occasional bad and stinking smell that wafted in the air when you're in mounds of garbage. But as volunteers, we didn't really mind. We were there to get muddy, dirty and to help in cleaning the mounds of garbage. We were sweltering under the sun, drenched in sweats but we were having fun. It was another eye-opening experience for us all, especially for my beloved 12-year-old Kyle. While we were picking up some garbage and putting them on our sacks, I told Kyle that what we were doing was basically a typical day for scavengers. Some people does literally hunt or scavenge in search for items like used plastic bottles in order to have something to eat for the day. This was my main reason why I tagged along Kyle for the Coca-Cola Coastal Cleanup event. I wanted to expose him in environmental events such as these so that he could see for himself what nature had become and later on decide what he can do something in his own little way to help preserve them. Also, it's a realization on his part to thank God that he's lucky to eat three times a day without the need to scavenge on a huge pile of garbages. 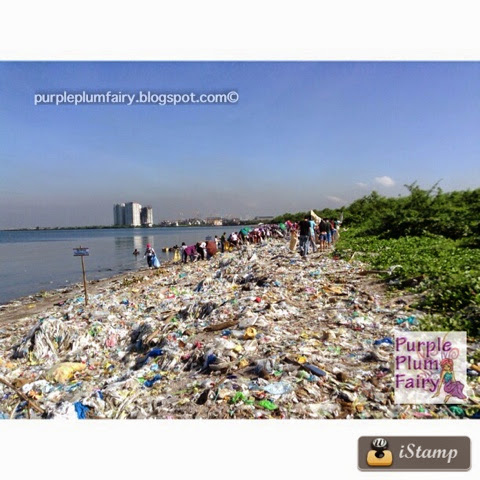 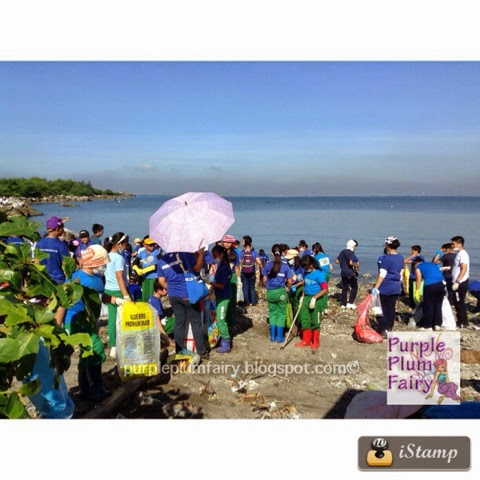 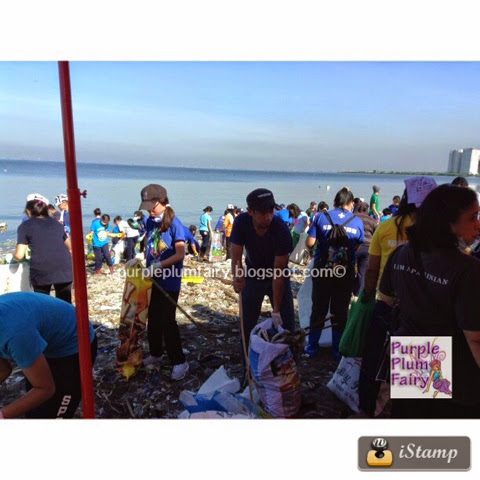 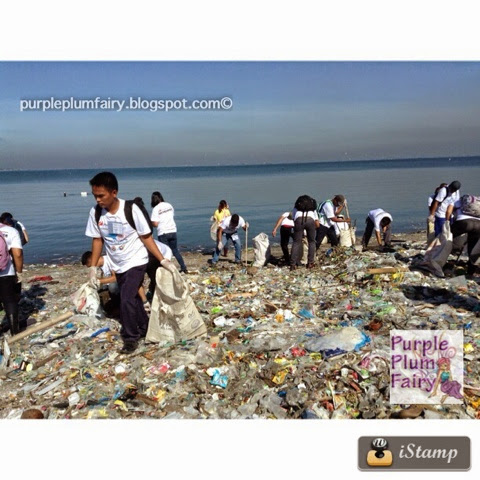 During the Coca-Cola Coastal Cleanup, Coca-Cola had given away Eight O' Clock Orange Juice Packs as well as Wilkins Drinking Water bottles and of course, Coke bottles to the delight of the volunteers. There were also water refilling stations and standby First Aid/ambulance for the security and safety of every volunteers. As a token for blogger volunteers, we were given personalized Coca-Cola shirts. 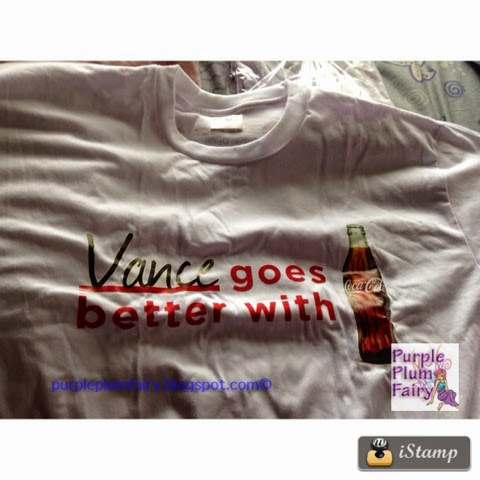 The cute shirt from Coke with my name on it! 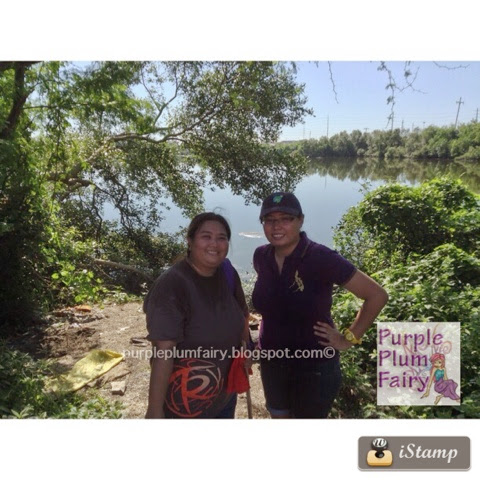 Moi and Dems Angeles take shelter under the trees.
In a nutshell, although we were a bit exhausted, starving and perspiring, it felt good to be able to give something back or do something for the environment. It may not be much, we may not have created much impact, but the most important thing was that we were able to do our share and has shown that we care. "Do what you can, where you are and with what you have".  We were only given one planet. If only everyone participates in environmental activities such as these, then maybe, we'd have a cleaner and better place to live in.
Thank you so much Coca-Cola and Green Bulb PR for inviting me to this event. I really appreciate that you've given us the opportunity to volunteer for this activity.
Disclaimer: I am not compensated for this post. Opinions expressed are 100% my own.
Posted by Vance M. Ramos at 8:37 PM