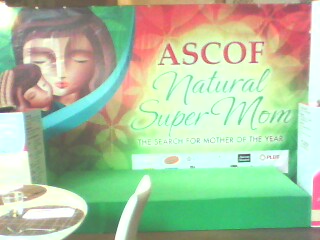 I was recently invited to cover the awarding ceremony for Ascof’s Natural Super Mom’s Search for Mother of the Year held at the posh restaurant Felix in Greenbelt 5. It was the apex to a long tribute (it was a 7-month celebration of motherhood) to mothers that began on Mother’s Day at SM North Edsa and made its way towards other selected SM malls nationwide. Among its panel of judges was none other than Ascof Brand Ambassador and Congresswoman Lucy Torres-Gomez. The grand winner Mrs. Esperanza Yu from SM Southmall was the most exemplary among the amazing group of women. She was awarded with Php50, 000 plus a number of valuable gifts. A prize of Php 7,000 was also awarded to her daughter who nominated her.


It was one of the most touching events or awarding coverage I’ve ever been to. Media guests like us couldn’t help but be moved by these amazing mothers. They all deserve this tribute. The grand winner, Mrs. Yu even shared her award to those mothers who were not able to join and be nominated in this contest.

My fellow blogger, Mommy Gigi Beleno who nominated her mother Mrs. Belen Celemin were also one of the finalists among a hundred participants. Finalists were awarded with Php 20,000 while Php 3,000 were given to those who nominated them. They were asked to read excerpts from their entries before each nominee was introduced and that has left almost everyone from the crowd with tears in our eyes.
It was one of the most touching events or awarding coverage I’ve ever been to. Media guests like us couldn’t help but be moved by these amazing mothers. They all deserve this tribute. The grand winner, Mrs. Yu even shared her award to those mothers who were not able to join and be nominated in this contest.

I got the chance to interview one of the finalists, Mrs. Hermini B. Coronado who was nominated by her daughter Mary Ann Coronado-Abines. They also had a really touching story to share with Mary Ann's mom suffering from stroke, mother and daughter surely had tough times. In fact, when I asked them what they'll be doing with the money they'll be getting from the said contest, they said they'll use it to support Mrs. Coronado's therapy. 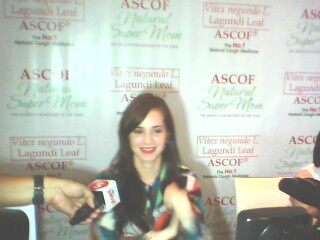 Lucy is a natural super mom herself, juggling her roles as a public servant, television personality, and of course, mother to Juliana. During the said event, Lucy understands that it entails a lot of hard work in order to raise kids. Mothers are selfless ones who light the homes, give unconditional love, care and support, nurturer and do everything to make sure her children are all right.
For Ascof, its Natural Super Mom search was a tribute to mothers everywhere. It is a salute to their selfless loving, an honor for those who, outside of their homes are also career women, mompreneurs, philanthropists, socio-civic leaders and health advocates.
Ascof Natural Super Mom-Mother of the Year Search was organized by Crush Communications Philippines in cooperation with the following sponsors: ASCOF LAGUNDI-the Natural Cough Medicine, Pascual Consumer Healthcare Corporation, SM Supermalls, PLDT, American Standard, Gain School Advance, St. Luke’s Medical Center, The Philippine Star, PAC (Professional Artist Cosmetics), Ystilo Salon and Nail-a-Holics. Special thanks to Media Sponsors: Melo 94.7 and Crossover 105.1 and Fox International Channels.
I’d like to end this blog post with with Ms. Lucy Torres-Gomez shared during the event which she has learned from her beloved Grandma, “It is motherhood that makes a woman all the more beautiful.”
With that, Kudos to Ascof and to all Mommies out there!
xoxo,