Before I get bashed here (just in case I'd get any), let me just say that I was just doing my job. The grand media press conference for the latest Viva Film entitled "Maid in Malacañang" was held at the Maynila Ballroom of the hotel I am working at. So it was normal that I had to cover the said starstudded press conference attended by the celebrity cast themselves along with invited media and online entertainment sites. This is not the first time I had encountered Sen. Imee Marcos. Back in 2018, I had the privilege of meeting her in Ilocos where I was able to write about the Palace Guard Brotherhood Association. 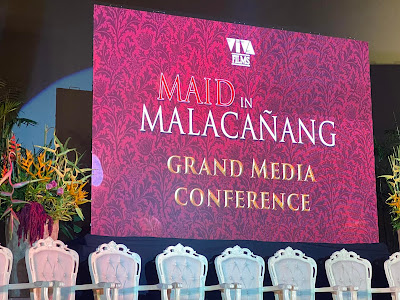 It is touted as a dramedy film that gives audiences a glimpse of the last 72 hours of the Marcoses in the Palace before the family left for Hawaii during the 1986 People Power Revolution.

"Maid In Malacañang was initially just a playful idea between Darryl and me,” says Imee. “And then it morphed into the project that it is today. I’m both excited and nervous about this movie and I’m really hoping for the support of the public once it hits theaters this August.”
Ruffa, on the other hand, learned more about the former first lady Imelda Marcos. My discovery is not about Madam Imelda Marcos, she has a beautiful heart, very sincere, mapagmahal, mahal niya ‘yung pamilya niya, mahal niya ‘yung bayan. But my discovery surprisingly was with Ferdinand Marcos Sr. He’s not only a strong man, a genius, but he’s very romantic/ as well.”
The cast invites everyone to watch the film.
The film will be opening in theaters nationwide on August 3, 2022.
Disclaimer: I am not compensated for this post, Opinions expressed are my own.
Posted by Vance M. Ramos at 9:37 PM