Regi's Snowy Yule Cheesecake is perfect for the holiday 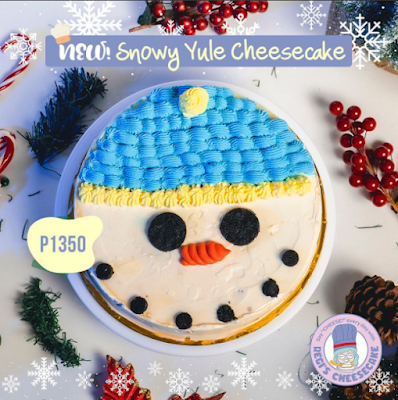 A friend of mine introduced me to snow cheesecake. Prior to that, I have no idea what exactly it is. Without much hesitate I googled and found out the best ones actually come from this young entrepreneur (yes, only 16 years old) who has come up with the perfect holiday treat called the Snowy Yule Cheesecake from Regi's Cheesecake.

Basically, it is a smooth and velvety confection that has the classic cheesecake sandwiched between a graham crust and a covering of white chocolate, the Snowy Yule Cheesecake is topped with delectable vanilla and white chocolate flavored frosting to create the perfect amount of comforting sweetness in every bite. Featuring a smiling snowman design, just the sight of this cheesecake can’t help but make one feel the cheer of the season even as their imagination transports them to a wintry landscape where they can build as many jolly snowmen as they want.

The Snowy Yule Cheesecake is the latest flavor to be introduced by Regi’s Cheesecake, a home-based baking business that grew from 16-year-old Regi Depante’s adventures in the kitchen. Cooking and baking since she was 7, Regi had found herself having more time to spend in the kitchen during quarantine last year, and what was initially a way for her to unwind from school work became a pursuit for “the best cheesecake recipe” she could make. After experimenting with many different ones and letting family members taste the results, Regi finally stumbled upon the perfect formula and began her baking business in earnest with the support of her elder sisters and her parents. Her delightful creations have been making their way to people’s tables and plates for almost two years, and the young chef’s curiosity for the many possible cheesecake flavors she could create has resulted in plenty of customers happily saying, “CHEESE!” every day. Among the many delightful and even unexpected cheesecake variants that she has added to the Regi’s Cheesecakes menu, her Heavenly Blueberry Cheesecake, Cheesecake Potpourri, and Sugar-Free Delicioso Burnt Cheesecake have become bestsellers that are available all year round.

For the holidays, though, the limited-edition Snowy Yule Cheesecake is the perfect centerpiece to the Christmas tablescape. Share slices of this white chocolate cheesecake that looks as festive as it is scrumptious with your loved ones and let your dreams of a white Christmas come true.

To order a Snowy Yule Cheesecake and to see the rest of the Regi’s Cheesecake menu, visit their Instagram and Facebook page @regischeesecake.