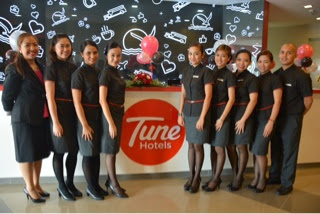 Tune Aseana Staff Photo Caption: Ms. Angeli Umali, Hotel Manager together with her Guest Services staff
The Philippines' largest internationally owned and operated hotel brand – Tune Hotels – has continued its impressive expansion in the country with the opening of the 200-room Tune Hotel Aseana City.
Located in the heart of the Aseana City in Paranaque, the property is the ninth Tune Hotels to open in the Philippines in the last two years after Angeles City, Ermita, Makati, Cebu, Davao, Cagayan De Oro, Quezon City and Ortigas.
Tune Hotel Aseana City is owned and operated by Red Planet Hotels and they have a long-term lease agreement for the site with D.M Wenceslao & Associates, Inc. The company’s Chairman, Delfin J. Wenceslao, Jr. was present with Red Planet Hotels Founder and Senior Vice President for Acquisitions, Ken Kerr, to officially open the hotel. 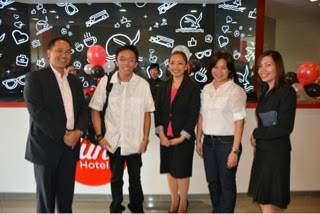 Tune Aseana Photo Caption:  (L-R) Mr. Benjamin Martinez, Director of Sales and Marketing, Mr. June Mare Ligan, Angeli Umali, Hotel Manager – Tune Hotel Aseana City, Ms. Sahlee Zaldivia, Country Head, and Ms. Rocemar Ballada, Senior Sales and Marketing Manager
Mr. Wenceslao said the Tune Hotel Aseana City was a welcome addition to the expanding precinct of Manila that will contribute to fulfilling Aseana City’s “work-life balance” mantra.
The hotel is perfectly located for both business travellers and leisure travellers to the area and Sahlee Zaldivia, who is the Country Head for the hotel’s owner – Red Planet Hotels, said this Tune Hotel (www.tunehotels.com) in a newly-developed precinct of Manila, will further strengthen the company’s confidence and commitment to the country’s tourism industry.
“The Aseana City precinct continues to grow and is fast becoming one of the country’s newest and most impressive lifestyle and travel destinations, the perfect location for the Philippines’ latest Tune Hotel and our ninth overall in the country,” Ms. Zaldivia said.
“By the end of 2014, we will have a total of 1,720 rooms with ten hotels in the Philippines, cementing our position as the largest internationally owned and operated hotel brand in the country.” 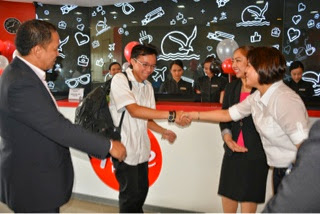 Tune Aseana Photo Caption:  Mr. June Mare Ligan is welcomed by Ms. Sahlee Zaldivia, Country Head of Red Planet Hotels Philippines
“Not only are we growing in numbers, but we have received a great deal of acceptance among the travelling public for the value for money that we provide.”
The next Tune Hotel to open will be the 189-room Tune Hotel Ayala Avenue in November 2014.The expansion will allow the company to take advantage of the 24% growth in tourist arrivals projected by the Department of Tourism for 2014. “We are fully committed to helping expand, and grow with, the international and domestic travel industries in the Philippines,” Ms Zaldivia said.
Red Planet Hotels Chief Executive Officer, Tim Hansing said even more sites are being sought to build new hotels in the Philippines. “We see the Philippines as the perfect platform to drive the South-East Asian expansion of Tune Hotels because of the country’s acceptance and embracing of new and inspiring brands that enable travel to the wider population,” Mr Hansing said.
“Our performance since opening our first hotel in Cebu and Angeles City in February 2012 has given us a great deal of confidence to expand further and we have already identified more new sites for hotels to that end.”
Since its establishment in Malaysia in 2007, Tune Hotels has 42 operating hotels worldwide in the Philippines (9), Malaysia (12), Indonesia (9), Thailand (4), England (4), India (1), Japan (1), Scotland (1) and Australia (1).
Tune Hotels feature space-efficient, streamlined rooms focusing on high-quality basics: five-star beds, powerful hot showers and high-speed wifi. All hotels also provide housekeeping services, electronic keycard access into rooms, extensive CCTV systems, and no access into the main lobby without a keycard past midnight.
Tune Hotels is a sister company of Air Asia Airlines.
For more information, please contact:
Benjamin Martinez
Director of Sales & Marketing
Tel: 464-9223
Mobile: 0917-8134853
E-mail: benjamin@redplanethotels.com
Website: www.tunehotels.com
About Red Planet Hotels Limited
Red Planet Hotels Limited was formed in 2010 and is a privately owned regional hotel investment company focused on Asian markets by developing a portfolio of hotels in the Philippines, Japan, South Korea, Indonesia and Thailand.
Red Planet Hotels Limited owns the hotels it operates and they are all managed under a franchise agreement with Tune Hotels. Red Planet Hotels Limited was formed with a vision to capture the growth in the worldwide value hotel market, supported by the growth in budget airlines and the robust economies of the ASEAN region, Japan and South Korea.
Red Planet Hotels Limited now has an ownership interest in 36 Tune Hotels either in operation or under development.
About Tune Hotels
Tune Hotels is part of the lifestyle business conglomerate Tune Group that was founded by Tan Sri Tony Fernandes and Dato’ Kamarudin Meranun.
Since launch, Tune Hotels has welcomed more than seven million guests in its properties throughout Asia, Australia, India and the United Kingdom.
Posted by Vance M. Ramos at 12:46 AM