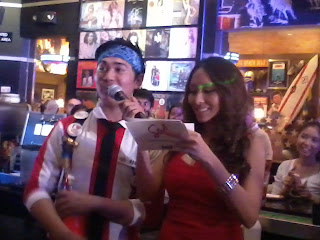 The popular American casual dining chain in the country welcomes summer with a sizzling new bar menu.  The updated bar list includes a wide array of affordable drinks such as the Ultimate drinks, beer on tap at P60, local bottled beer at P75 and beer by the buckets for an easy price of P350! Cocktails will also be available with prices ranging from P125, and it includes well-loved favorites such as the Long island Tea, Bahama Mama, Kamikaze and 77 Sunset Strip. To make sure that it satisfies your summer quench for both adventure and thirst, cool down with the refillable Mojito, which is available for only P295!

The new beverage menu features concoctions will surely fit any personality whether you’re a party animal or would just like to cool and hang out for a drink and conversations after work and simply de-stress. To further entice loyal patrons, TGI Fridays Red Card will be available by first week of April. The lucky holder of the Red Card will be given a buy-one-take-one promo for cocktails every Thursday at all branches.
As if those promos were not enough, TGI Fridays also launches its first leg of the Stars Behind the Bar tour featuring a showcase of the restaurants chains’ celebrity bartenders, free drinks, and a chance to learn basic flairs and cocktails. To give you a glimpse of how fun it was, go watch this video:


The featured bartenders went through rigorous trainings and auditions and were previous participants of the Shake, Rattle, and Pour Bartending Championship, which will be held again on its 18th year this 2013. TGI Fridays is known for popularizing flair tending, and hosted the first known bartending competition in the US in 1985. Consumers flock the bar each year to watch bartenders dazzle with every flips, flairs and tricks before drinks are delivered with a personalized touch. 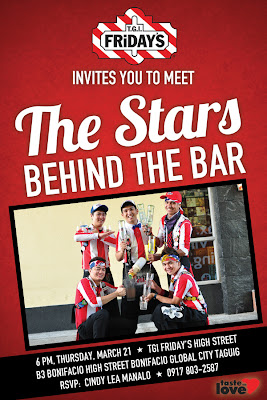 TGI Fridays’ Stars Behind the Bar Tour is in partnership with Stolichnaya Vodka. Catch the excitement on the following dates and branches: Bonifacio High Street on April 11 and 25, Glorietta on April 12 and 26, May 10; Mall of Asia on April 4 and May 16; Eastwood on April 5 and May 17; TriNoma on April 14 and May 4; Malate on April 18 and May 23; Alabang Town Center on April 19 and May 24; Tomas Morato on May 2 and 30; and Robinsons Galleria on May 3 and 31.
Like TGI Fridays on Facebook: http://www.facebook.com/welovefridays. Follow them on Twitter: @Fridaysphil or visit them http://fridays.com.ph
Purple Plum Fairy thanks Perkcomm for the invite.
Disclaimer: I am not compensated for this post. Opinions expressed are 100% my own.