Call it Serendipity. Call it any other way you want it. But for someone like Zendee Rose Tenerefe--everything just seemed to have fallen into their right places at the right time. Better known as the "Random Girl" , "Mystery Karaoke Girl", "Viral Diva" and "Supermarket Superstar", she was the girl who was captured on video by a passerby (Yuan  Juan or youngjay0918 who happened to be a video blogger) while singing  Jennifer Holiday's "And I Am Telling You"--at a videoke display stand in a supermarket. That video, posted on July 28, 2012 on YouTube,  which quickly went viral, granering over 2 million hits, 14,063 likes and more than 5,000 comments.

If you guys live in the boondocks, here's Zendee's video: This video was taken from YouTube.

Zendee Rose Tenerefe soon became popular and this video brought the attention of Warner Music Philippines to sign her up as one of their recording artists. She also gained more popularity by guesting on The Ellen DeGeneres Show--exactly a month after that video was uploaded. During the show, DeGeneres gifted Zendee an iPad 3.

If you have failed to watch it, here's the video of her guesting:

Zendee is now officially a recording artist as she releases her very first single “Runaway” under Warner music Philippines. The song showcases Zendee’s powerful and soulful voice as it shows some vocal gymnastics with a twist, clearly showing Zendee’s singing prowess that will surely be loved by her fans. 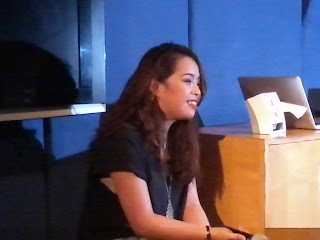 Runaway is about not allowing difficulties to get in the way of your dreams, just like Zendee did. The song was written by Andrew Fromm, who has also written for the likes of The Backstreet Boys, Nync, and JoJo. With such fantastic voice, Fromm wishes that the song will be bringing more recognition for Zendee’s world class talent.

Zendee's such a natural girl with extraordinary talent. Watch this video and see for yourself how this provincial lass aspired for her dreams and finally nailed it.


Runaway will also mark as the first local recording to be mastered for iTunes for the Philippines by Warner Music Philippines and Asia Pacific. It only meant that the recording is mastered and optimized for increased audio quality in digital format.

“I am super excited to hear my single being played on the airwaves. I am also pretty excited for my very first album set to release soon, probably by February next year. My dream is to have a concert of my own where fans and supporters will be able to sing along with me as I sing my songs,” says Zendee.

Listen to Zendee as she gives us a sample of her first single: