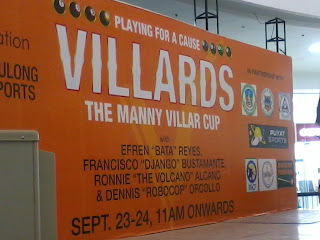 Sixteen amateur players from all over the province of Bulacan qualified for the said competition. Philippine Billiard Star Players—Efren ‘Bata’ Reyes, Francisco ‘Django’ Bustamante, Ronnie ‘The Volcano’ Alcano and Dennis ‘Robocop’ Orcollo also graced the said event with awesome exhibition games. “Billiards now matches the popularity of basketball among Filipinos, especially the youth. Support of this sport should be encouraged and enhanced,” said Sen. Villar, who led the ceremonial ‘break’ of the said billiard tournament. 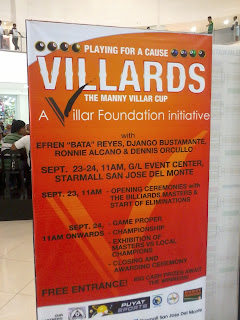 The Villar Foundation organized the first Villards Cup back in 2008. It aims to provide promising billiard players a venue to participate in a tournament and play against other amateur players alongside veterans and billiard champs.


“Villards Cup is one of the sports-oriented programs of the Villar Foundation as it encourages youngsters to engage in sports and channel out their excess energy in doing something productive than getting astray or into illegal drugs,” said Mrs. Cynthia Villar, former Las Pinas Representative.  “We hope that through the Villards Cup, we will be able to discover and hone potential amateur billiard players.”


Sports development is only one of the many advocacies of the Villar Foundation. In its two decades of service, various sports programs had been implemented as it continues to tap the youth and support them in footballs clinics and sports leagues among many others.


The Villards Cup has been staged in key cities of the Philippines and has featured the best Filipino cue artists as it continues to discover and mold potential billiard players of the country.

Big cash prizes were given to the winners, plus a once-in-a-lifetime chance to meet the billiard legends of the country today. The Villards Cup is a project of the Villar Foundation in cooperation with Starmall, Puyat Sports and Billiards Managers and Players Association of the Philippines.