When I had a stint as an entertainment editor at a local showbiz online portal last year, that’s the only time I got to know Darren Espanto. Prior to that, I had to admit I knew nothing about the young lad, simply because I don’t watch TV that much as I didn’t had the time. I got to know him after I was invited to his press conference prior to his birthday concert held at the SM Mall of Asia Arena. That’s how I’ve come to know that he’s a product of The Voice Kids Philippines. At first, I couldn’t understand all the adulation for Darren, to be completely honest about it. I mean, sure he’s cute. But there were many other equally talented young guys and even better looking than him. So why the hell was he getting as much attention just like most K-Pop singers do?


After seeing him perform live at his said birthday concert last year with my dear nephew Kyle (who’s a bit younger than he is), I began to understand why. I’m no longer surprised why fans go crazy about him. I mean, Darren’s a total performer and he also had his own charm, that’s apart from being very down-to-earth, but then that’s another story. The guy’s got an amazing pipes to begin with. He even surprised everyone at his concert by singing Chandelier while showcasing his other musical abilities (Darren can play other musical instruments which reminds me of Rivermaya’s Rico Blanco). 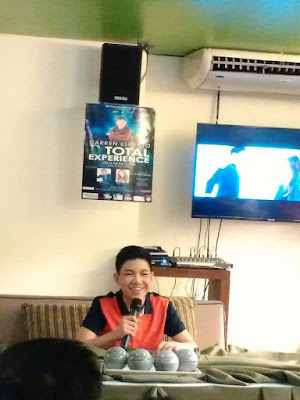 Clearly, Darren has no other way to go but up. Everything’s coming up roses for Darren. He’s able to achieve a lot at an early age, not everyone has that opportunity. Right after becoming Lyca Gairanod’s runner up at The Voice Kids, Darren has definitely gone places (if you ask me, he’s gone pretty much ahead than Lyca who only came up with just a self-titled album). Darren also received a platinum award for his debut album “Darren” and other countless awards from prestigious award giving bodies. He also received accolades and recognitions internationally, citing positive comments from the likes of international artists such as Nicki Minaj, Ashton Kutcher and American Idol alumna Fantasia Barino for his viral videos. 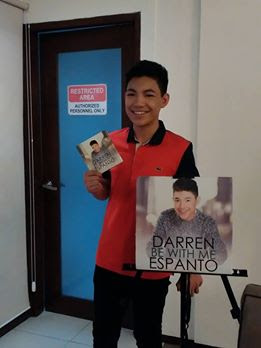 What many people don’t know was that things didn’t come easily for Darren. He had to sacrifice a lot in order to be where he is now. During our recent interview with him, Darren confides, “After The Voice (of the Philippines), Ms. Lea (Salonga) actually asked me if I’d like to audition for a musical play. I gave it a try and the producers really wanted me for a call back and even offered me the role. Unfortunately, at the time when the rehearsals are about to get started, my hands are still full with commitments. So with a heavy heart, I knew I had to choose between doing that project and getting the most of what I have with my career. Maybe, it just wasn’t meant for me.” And of course, Darren chose the latter.

Darren also had to sacrifice being away from his own family. His whole family is based in Calgary, Alberta Canada. His parents and sister only comes once in a while to pay him a visit. “There will be times when I would miss home. But I’m so happy that my family has been very supportive of me. They knew how much passion I have for singing and my career,” Darren shares. But despite the distance, he makes sure that he communicates with them every single day.

The support of his fans—The Darrenatics helps because for him they are his family here. And in this light, in time for his 15th birthday, Darren waxes another album called “Be With Me.” With top-notch producers Kiko Guevarra, Jungee Marcelo, Jay-R, Kiko Salazar and a line of international and top Filipino composers, the album is another feather on Darren’s cap. In his latest album, Darren also showcases yet another talent, he also composed his own songs.

“Yeah, I actually wrote two songs here on my album. I used to be hesitant sharing the songs I write. But now, I’m more confident to share it with my listeners and fans. I wrote “Hanggang Hi Hello” when I was eleven and I was to change some of the lyrics to suit my age now. I also wrote the song “Home” which is a ballad. It’s actually one of my favourite compositions,” enthuses Darren.

“I want to take my fans along my journey as an artist, as a musician and express myself through music. I understand that music is my way of sharing God’s given talent to me,” says Darren.

“It’s a different album from the first one I’ve had because I’d like to think this one sounds more mature. I was happy to have worked with very talented songwriters and we gave each song a different message and sound to it,” he adds.


Here, Darren shares a sample song from his latest album:

Darren’s “Be With Me” album is now available through digital downloads and streaming via Spinnr, iTunes, Apple Music, Spotify, VEVO ands in CDs at Astroplus and Astrovision outlets nationwide.


Darren's message to his fans: 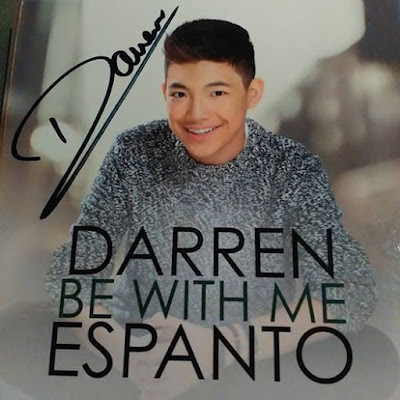 Here's our GOOD NEWS!!! Because Darren Espanto, Universal and MCA Music Inc. are generous enough, we will be giving out a giveaway!

*Failure to follow the mechanics above will result to disqualification.
We will be raffling off the names of the participants on a fish bowl. And we will pick one lucky winner. Lucky winner must be willing to meet up with me personally or shoulder the shipping and handling fee (via LBC).  Winner will be informed via email once all the entries have been verified. Good luck and thank you in advance for joining. Winner will only be given at least a month (30 days) to claim his/her prize.
Contest starts today, June 14, 2016 and will end n June 30, 2016 at 12 MN.