Why am I rooting for Mar Roxas? Because there’s definitely more to Mar Roxas than just good looks!


Have you guys made up your mind regarding who will you vote for the 2016 Presidential elections? I once read a Facebook post on my friend’s FB wall where they have discussed the qualifications of each presidential candidates. Each candidate have been subjected to public scrutiny from the time they had expressed their desire to run for office. Among the ones who usually get flak not because of who he is but because of what he has was none other than Liberal Party standard-bearer, Mar Roxas.


I would often hear that some people didn’t like Roxas because of his wife, TV personality/news anchor Ms. Korina Sanchez, who people had this notion of being ‘maldita’ because she’s known to be brutally frank on and off camera. But then, it’s not the wife who’s running for presidency, it’s the husband. And when compared to others, Roxas is indeed one of the most credible ones to run for the country’s highest position. Others don’t like Roxas simply because he’s born with the proverbial silver spoon and the masses thought that he doesn’t seem to relate much with them well.


While it is true that Roxas isn’t someone who was born poor, the guy knew so well how it is to have a genuine heart for the unfortunate brothers and sisters. As the Roxas guy says, “Walang drama, trabaho lang.” Another thing we noticed was that, among the candidates, Roxas is actually the most guwapo among the guys. Tall and handsome (in his own right), Roxas is indeed a headturner.  He’s also the most dignified. We’re not being superficial here, we’re just saying the things that we’ve observed. No offense meant, but seriously speaking, Duterte is quite old and yet someone really bastos. Not to mention, he’s a self-confessed serial killer and a womanizer.  Binay is not only dark skinned (who also started the political dynasty of the Binays in Makati) but also a well known corrupt. Grace Poe is a liar (She’s an American remember? She once denounced her being a Filipino. If she wins, we won’t be surprised if our national anthem would be changed to “Stars Spangled Banner.”) And we find her too showbiz. Poe, whose campaign is anchored on the popularity of her late adoptive father, an actor who once ran as president.  She should start producing local movies instead of joining politics. That way, she’s bound to finish what her late ‘Dad’ Fernando Poe Jr. has started. Poor FPJ, he’s already 6 feet below the ground yet still being used all for the sake of political power. As for Miriam (Santiago), she isn’t in her proper health to even run for public office. 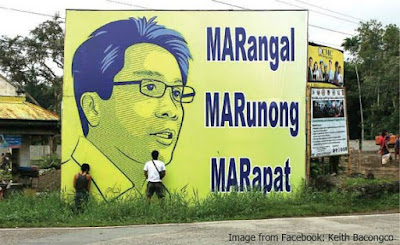 Let’s go past the physical looks, shall we? Born wealthy, the 58-year-old Roxas was educated abroad. He’s a graduate of the University of Pennsylvania’s Wharton University. He was a former investment banker in New York. When it comes to experience, he has served as the trade secretary under former presidents Joseph Ejercito Estrada and Gloria Macapagal Arroyo. He was also elected as senator in 2004. And for the outgoing administration, he’s served as the secretary of the Department of Interior and Local Government.

Unlike Poe who keeps riding on the popularity of her late father or like Binay who’s trying to win votes and sympathy by portraying himself as a champion of the poor despite confronting corruption allegations, Roxas has a clean track record. I’m not saying that he’s someone who claims to be hollier-than-thou, of course, he’s not perfect. But he’s never been involved in any incident that might stain his family name.

The president should be someone we all look up to and admire. For me, he should be someone that I want my children to emulate and aspire to be. The president should be the best person who will represent us to the world and to society. He should be beyond reproach. No stain or record of corruption. No taint of impropriety with women. No questions about his human rights record. After all, he has to defend the constitution, which applies to all. He has to be courteous and diplomatic. He has to have one word and live by that word. He has to be able to inspire his people to follow him and to do as he does. Cliché as it may sound, but a good leader has to be someone who’s a good follower. He has to be a good role model to everyone.

I can aspire for the same things Mar does—freedom from hunger, freedom from fear, and freedom to dream. Roxas’ platforms make sense. It’s well-thought out and it’s comprehensive. It is a platform that will bring the Philippines into the next generation with prosperity and equality.

Roxas’ platform is the only one that offers continuity from the previous admin (some people think it’s more of a disadvantage on his part, rather than an advantage), but I’d like to think otherwise. May’s presidential election is the biggest wild card in the Philippines. At stake is sustaining Aquino’s success in curbing corruption, boosting growth and trimming the budget-deficit—a record that won the country an investment-grade debt rating for the very first time.


Roxas said he will give local governments more autonomy to decide their budgets in a system that rewards efficient spenders. He will review the law to reduce power costs to attract more factories, increase investment in agriculture to reduce wastage while strengthening education and infrastructure to support tourism and outsourcing.

Mar Roxas is truly the man who we need to lead the country to even greater heights. He’s the only guy who possesses proven competency, untainted reputation and unwavering commitment required of a President. Indeed, there’s more to Mar Roxas than just plain good looks. He becomes all the more guwapo because of his proven track record and what he aspires for our beloved country.