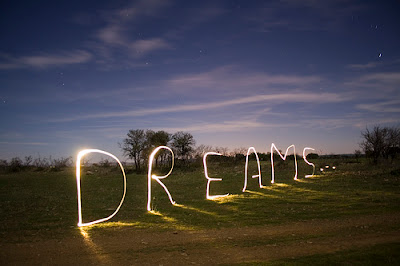 I feel kinda sad whenever I see people hungry and starving. They say, when you dream, dream big. After all, dreaming is free. In doing these, they said your life could at least prosper. I believe that there’s still hope for our country. People just had to believe in themselves. The truth is out there. Do not allow yourselves to believe in the  ‘propaganda’ especially the ones found in social media.


I don't normally express my thoughts on politics, much more endorse a candidate. But this time, for a change, since people nowadays are so blinded to actually see the truth that's out there. Roxas says he wants fellow Filipinos to be just like him – “malayang mangarap, may kalayaan laban sa gutom." 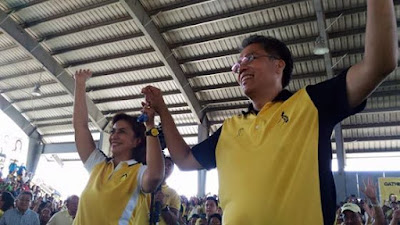 Roxas said that the reason why he's running as president of the Philippines is because he wanted each and everyone of us to experience the kind of life that he has. He wanted us to have the opportunity to work and earn our own money. When people have stable career and job opportunities, there'd be compensations and when there is such, nobody will ever go hungry. Nobody will be starving. It's basically a snowball effect. The Roxas-Robredo tandem will do everything they can to eradicate hunger by means of providing jobs. 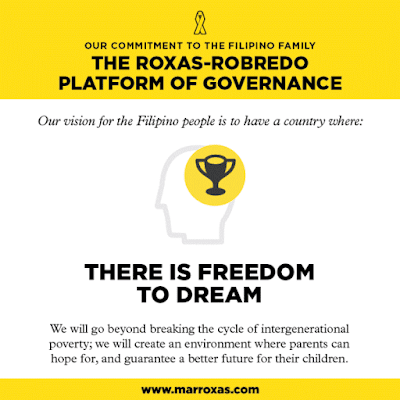 "We will go beyond breaking the cycle of intergenerational poverty; we will create an environment where parents can hope for, and guarantee a better future for our children.

It would be easy to embrace and discover one's dream and get the impression that you should by all means go and shoot for that dream. Some of us have been used to saying, "Ï am not called to this,"as an excuse to be lazy or irresponsible and not serve the community which they are a part. On the contrary, the greater the freedom (and ability to dream) comes with a greater responsibility to release others into the same. "

The Filipinos are a generous people. And Filipinos deserve so much more. I've always said that I was voting for continuity. I think I've found a deeper reason now. I'll be voting for Roxas-Robredo who truly and firmly believe in the greatness and goodness of the Filipino people, even after seeing them at their worst.

Roxas said that the leaders should bring out the best in people. During the final debate, he did just that. For me, he's the best man for the job!