The Rite of Election: A Perspective of a Filipino Catholic Voter 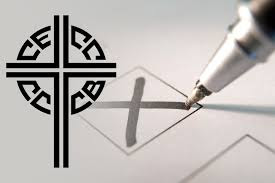 I’ve been raised a Catholic all my life. I studied in parochial school in high school and went to an exclusive Catholic college in Manila. My being Catholic is deeply rooted in my system and it was not something I just learned to embrace with. I’m not claiming to be an expert on my faith. But having taken units in Theology and read Encyclical letters and thoroughly studied Catechism of the Catholic Church for years as a pre-novitiate, I must say I understand the belief well.

We have read much about the separation of the state and the church. But we need to understand its interconnection as well as the thin line that separates the two. This coming May 9, as we vote for our next President, I firmly believe that as Catholics, we must consider a lot of things before deciding who we should root for.  Bear in mind that whoever you vote firm reflects your own character as a person.

The Presidency is not all about solving crime, drugs, and traffic. And most of all projecting a tough guy image. A President is a father to a nation. As Catholics, we should choose the one who is God-fearing. We are privileged enough to choose who we’d like to vote in accordance with our own will, unlike other religion or sects who had no freedom to do so because of block voting. If you ask me, this is one defining moment for us Catholics to rally behind CBCP (Catholica Bishops Conference of the Philippines) against Duterte.

Davao City Mayor Rodrigo Duterte has warned us Catholics not to vote for him. "Sundin ninyo ang inyong bishop kasi kung hindi pupunta kayo sa impyerno," Duterte said on Tuesday at an election forum at the University of the Philippines campus in Iloilo City. Duterte made the said remark a day after CBCP president Lingayen-Dagupan Archbishop Socrates Villegas posted on Villegas posted on Facebook a video of his controversial remarks about the rape in 1989 of an Australian missionary.

"Judge for yourself if this is the right choice. I will keep my personal judgment to myself. This video can help...." Villegas said in his caption.
In the video, Duterte was heard saying, "P-- ina, sayang. Ang napasok sa isip ko, ni-rape nila, pinagpilahan nila lahat doon."

Respect begets respect. Caritas Manila’s Executive Chairman Father Anton Pascual also aired his own opinion, “Presidency is all about character, nothing more, nothing less. He should be a good role model being someone looked up to by his fellow Filipinos most especially the youth. That’s why he should lead by example and must know his GMRC .(Good manners and right conduct).

Duterte’s psychological assessment on 2010 was the basis of his legal separation with his former wife. It’s a manifestation of who he really is, by law he can be a president.  But technically immoral to be a leader. It’s been very much proven with his thinking, reasoning, and much more his immoral statements, and not to mention his way of disrespecting women. It’s not even religion to begin with, it’s all about respect with one another, which he clearly lacks. Presidency is not all about religious belief, it is about leadership with moral ascendancy. 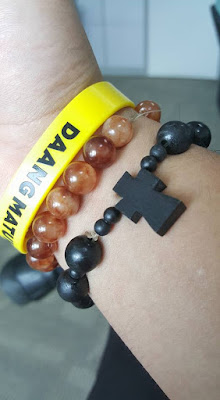 C’mon, Catholics, listen to what your conscience is telling you. Conscience is NOT the same as your opinions or feelings. Conscience cannot be identical with your feelings because it is the activity of your intellect in judging the rightness or wrongness of your actions or omissions, past, present, or future. On the other hand, your feelings come from another part of your soul and should be governed by your intellect and will.  Conscience is not identical with your opinions either because your intellect bases its judgment upon the natural moral law, which is inherent in your human nature and is identical with the Ten Commandments. Unlike the civil laws made by legislators, or the opinions that you hold, the natural moral law is not anything that you invent, but rather it’s something you discover within yourself and is governing your conscience. Conscience is the voice of truth within you. It is your opinion that needs to be in harmony with that truth.

As a Catholic, you have the benefit of the Church’s teaching authority or Magisterium endowed upon her by Christ. The Magisterium assists you and all people of good will in understanding the natural moral law as it relates to specific issues. Our feelings need to be educated by virtue so as to be in harmony with our conscience’s voice of truth. When you do this, you will have a sound conscience, according to which you will feel guilty, and feel morally upright when you are morally upright. We should strive to avoid the two opposite extremes of a lax conscience and a scrupulous conscience. We must meet the obligation of continually attending to this formation of conscience.

I don't want to bore you to death. But why am I discussing all these? My point of being is if a political candidate supported killing (or worse, committed the actual crime himself) and rape, or any other moral evil, for that matter, it would not be morally permissible for you to vote for that person.

St. Thomas Aquinas put it this way: “Wherefore human laws do not forbid all vices, from which the virtuous abstain, but only the more grievous vices, from which it is possible for the majority to abstain; and chiefly those that are to the hurt of others, without the prohibition of which human society could not be maintained: thus human law prohibits murder, theft and such like.”

If a political candidate supported anything morally evil, such as committing a crime for that matter, it would not be morally permissible for you to vote for that person. This is because, in voting for such a person, you would become an accomplice in the moral evil at issue. It is with such gravity and importance that allows for political maneuvering. It is an issue that strikes at the heart of the human person and therefore should be non-negotiable. It renders a candidate for office unacceptable regardless of the position he’s running for.

You must sacrifice your feelings on this issue because you know that you cannot participate in any way in an approval of violent and evil violation of basic human rights. A candidate for office who supports any other moral evil has disqualified himself as a person that you can vote for. We need someone who is pro-life. The key is to know the distinction between policy and moral principle.

On the other hand, no policy or strategy that is opposed to the moral principles of the natural law is morally acceptable. Thus, technical reason should always be subordinate to and normed by moral reason, the kind of reasoning that is the activity of conscience and that is based on the natural moral law.

The right to life is a paramount issue because as Saint Pope John Paul II says it is “the first right, on which all the others are based, and which cannot be recuperated once it is lost.” If a candidate for office refuses to respect the law, the rights of his fellow brothers and sisters as well as life itself and put justice in his own hands, he has laid the ground for refusing solidarity with anyone. 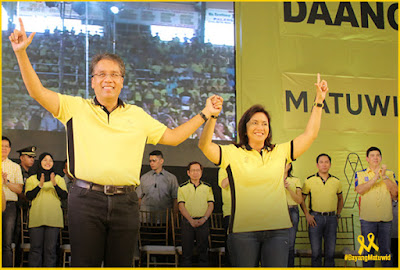 I don’t normally speak out my opinion regarding political matters. But this time, I feel it’s about time to voice out my thoughts. After all, as a blogger and media practitioner, I believe I am also an online influencer. I'd vote for someone who'd bring the kind of future that my child can live in safely. I don't want him suddenly blurting out: "I want to be like the next President of the Philippines" or  following footsteps like that. That's why I'm proud to say that I'm a volunteer at Bayang Matuwid.

I’d like to express my irrevocable support to the Roxas-Robredo tandem this 2016 May Elections. I don’t know about you, but Mar and Leni for me best exemplified the President and Vice President that the Filipinos need. I'm not saying that these two are 'holier-than-thou' or that they are perceived to be 'perfect'because we all know nobody is. But Mar Roxas and Leni Robredo have the integrity, credibility, experience and both are God-fearing whose only desire and mission was to serve the nation. I can personally attest that Roxas-Robredo's strategy strives for an honest, good governance compared to what we have before.

As a practicing Catholic, I want my President to have tact as much as his willfulness to enforce the laws. How can a man enforce the law when he breaks the others? Much as my desperation and frustration sometimes tempt me to cast my vote on Duterte, I cringe at the way he acts towards women, much more after he admitted to several crimes. I could never entrust our country to someone who has no respect for another human being. Joking about rape- is not funny at all.