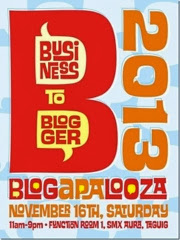 The very first Blogapalooza happened around two to three years ago if I'm not mistaken at the Top Shelf of Fully Booked in Bonifacio Global City. There were only about 150 bloggers then who were invited for the event. Too bad, I wasn't able to attend the said event because at the time I was probably preoccupied with a lot of things. But my blogger friends came and they had really wonderful memories of it.
Last year, they were supposed to have the second Blogapalooza event, but for some reason, it wasn't pushed through. Ergo, when I've heard from my friend Daryll on her blog that there'd be another Blogapalooza this year, I immediately signed up and hoped to make it to the list. I've immediately marked the date red and made sure I'd be available on that particular day. 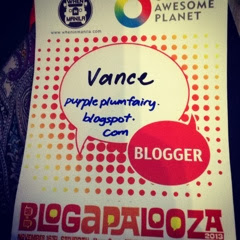 So when the day finally came. It was my first time to attend the much-talked about event for bloggers. The sad part was that I had to go there on my own, two of my friends who made it to the first Blogapalooza weren't available this time around. So I felt both excited and at the same time kinda scared going there alone with a crowd of strangers--I had no idea how am I going to fit in. I mean of course, I probably knew some of them online but one could never really tell if I'd be able to carry myself in such a crowd. Upon arriving at the SMX Convention Center of SM Aura, I saw Hana Abello--she's a fellow lifestyle/food blogger whom I have met countless of times in events, and although we weren't really that close, it was nice to see someone I'm familiar with. Being with Hana made me felt safe and more comfortable. 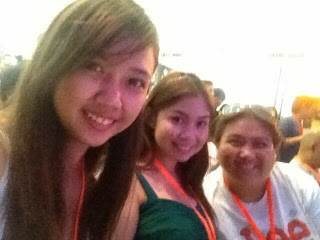 I thought Blogapalooza would be some kind of a classroom type lecture where partner businesses would talk about their products/brands (because that's how it was during the very first Blogapalooza), but it turned out--it was an interactive one. There were different booths to check out inside the SMX Convention Center. Bloggers had that rare opportunity to meet the ones behind those businesses or at least get to know the brands/products or services. Hana and I spent our first few hours at Blogapalooza by dropping by these awesome businesses. The best part was that, for every booth you visit, aside from meeting new people (and possible prospective partners) you also get some instant freebies! And I'm not talking about just one type of business here--from toys (Richwell Trading) and cosmetics (BYS), services (Lulu Nails and New York Theraspine), advertisers (Ambient Digital), travel and shopping destinations (View Park Hotel, Megaworld Malls, and The Mind Museum), food (Tempura Japanese Grill, Congo Grill, Karate Kid, Gavino's Donuts, Plato Wraps, Chooks to Go, Hungry Juan, Figaro, Brown Bag Coffee and Chef's Noodles), kiddie attractions (LazerXtreme) to something for the the health conscious--Slenda and Wheat Grass drink...Actually, there were a whole lot more, I just couldn't quite enumerate them all. I might have missed some of the booths since there were a lot of things simultaneously going on at the Blogapalooza event. 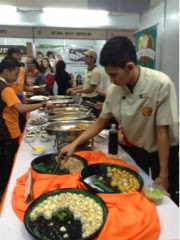 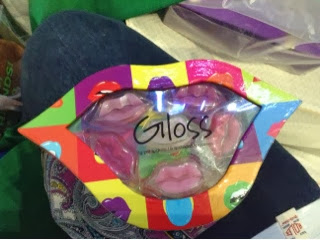 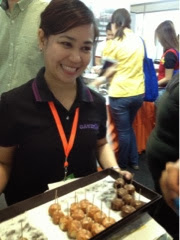 Hana and I both enjoyed dancing and playing the Kinect via an interactive motion play at the Bounty Fresh's Chooks to Go booth. We weren't able to grab the top prize of roasted chicken but we went home with an apron each which weren't bad anyway. Plato Wraps gave each bloggers a chance to sample their delicious signature pita breads from Dagupan, Gavino's Japanese donuts gave us an entire box of delectable  Mochi rings and balls (I super loved their Mochi ring in Pork Floss and Mochi Balls with Green Tea fillings!). Figaro gave us free flowing coffee throughout the entire afternoon, while WheatGrass gave bloggers the chance to sample their healthy grass drink and check out what it does to our blood circulation as well with a microscope-like machine. Hungry Juan gave bloggers free snacks of our street food favorite barbecue and isaw. Tempura Japanese Grill and its sister companies Karate Kid and Congo Grill gave us our free lunch and complimentary drinks. So we had a taste of their best selling sisig and california maki. 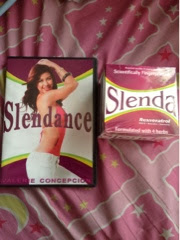 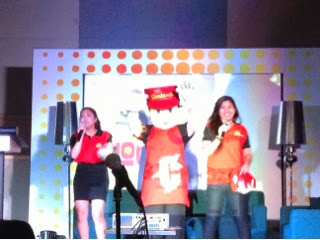 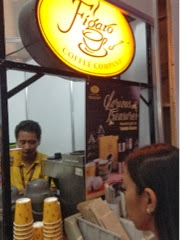 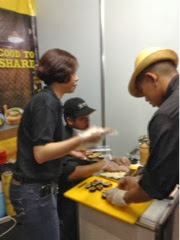 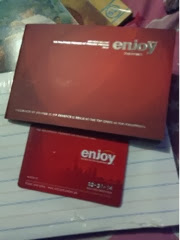 The guys from The Mind Museum booth even exercised out brains via pick-a-question-from-the-bowl kind of game. Hana was a big help as the question that I picked had something to do with medicine, since she's a nurse by profession she helped me with it. We both got The Mind Museum notebooks as prizes. And while we were at the Blogapalooza, Hana and I both made a blog by answering "What gallery or exhibit is mind-blowing at The Mind Museum?" We were told that the first 20 bloggers who sent in their links on the same day wins 3 all-day passes at The Mind Museum + entrance passes to the Da Vinci Exhibit. We persevered despite the somewhat slow uploading of photos with the free wifi connection (PLDT actually gave bloggers a fast internet access but perhaps due to the volume of bloggers using them actually slowed it down). 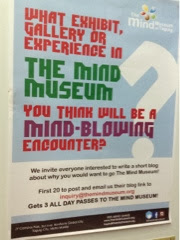 We were given free trial Enjoy Cards, good for use until March 2014. They also had a fish bowl where they've asked bloggers to pick a prize. I won a spa massage certificate from Tocarre Spa. They even said one blogger went away with travel trips. Such a lucky soul!  Meanwhile, Megaworld Lifestyle Malls also had a spin-a-wheel game where bloggers won prizes such as gift certificates for pampering, beauty services and cinema passes. I won a cute LINE stuffed toy from them which was truly adorable. Other bloggers I've passed by would say how lucky I am to have gotten such bear because they'd love to have one but got gift certificates instead. 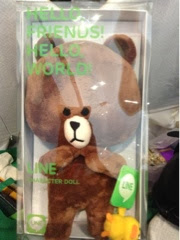 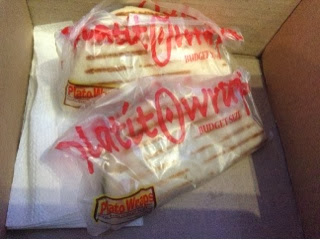 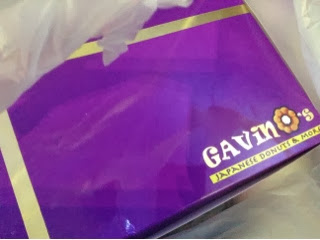 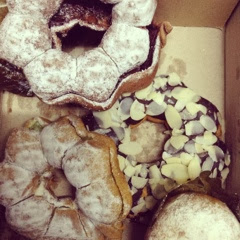 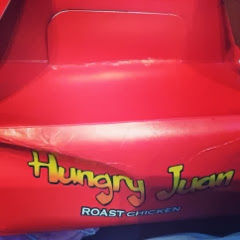 By the time Hana and I sat down on a seat she had reserved at the back near the stage, we listened to Happy Even After and Sex and Sensibilities founder and solo parent advocate Ana P.Santos as she shared her personal experiences with blogging and writing. I've met Ana before and I always knew she was all for women empowerment. It was followed by sexy siren FHM cover girl, Karen Bordador who said she got bullied a lot when she was younger and even received both bashing and marriage proposal online. But she was able to rise from all such things with courage and some girl power. 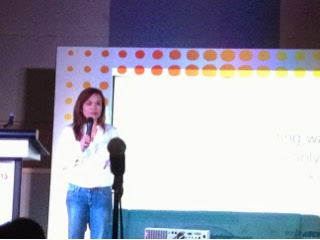 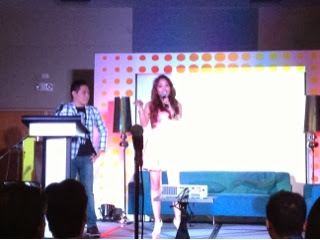 There was no dull moment in Blogapalooza. From time to time, Vince Golangco, the guy behind When In Manila and founder of Blogapalooza would award prizes to lucky bloggers who tweeted using the hashtag #Blogapalooza. Since Hana and I were seated near the stage, we've joined every chance we got. But seriously, I wasn't thinking much of the prizes, of course, it wouldn't hurt to get perks and freebies, but I guess they're more like some kind of bonus. Fellow bloggers know that each time we'd be attending an event, it was but normal for us to Tweet and share to our readers/followers what's happening to this and that event or update them where we are or what we're doing. So it comes as no surprise that Blogapalooza was trending on Twitter at the time. Bloggers got some sample toys from Richwell Trading simply by visiting their booth where they had given out Moon Dough small craft kits and dinosaur looking robot toys. On top of these, Mommy bloggers even had the chance to grab a toy of their own choice from the Richwell Trading sponsored prizes during one of the Blogapalooza Twitter contests--they had given out toys from V-Tech, Barbie, Uno etc. I guess I was truly lucky to have been in the right place and time when they had announced that so I was able to brought home a huge Barbie Beauty Salon set for my niece Icy! 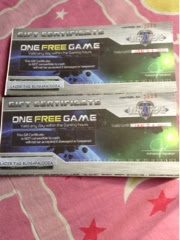 BYS also gave away awesome beauty loot for all the ladies out there--a box of lip gloss in various shimmering colors! View Park Hotel had given us a souvenir shirt with Blogapalooza imprinted in front. There was also a raffle where they had given away spa massage gift certificates, I've called it my day when I received an SMS saying I had won a gift certificate. Lazer Xtreme also gave out free games to the bloggers. I knew my adopted son Kyle would definitely be happy about it. 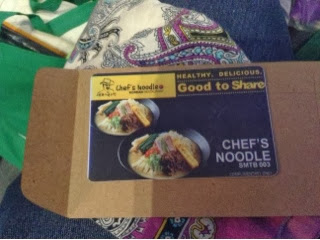 Chef's Noodle, known for their delicious Korean fare also gave away sushi (cold rice dressed with vinegar, formed into any of various shapes, and garnished especially with bits of raw seafood or vegetables) sets to bloggers who signed up on their email subscriptions. Chef's Noodle also gave away Noodle gift certificates to first ten lucky bloggers who joined their Twitter and Instagram contests. Hana and I also won in the said contest.
Whew! I must have done something good in the past to deserve all the things I had won that day. In fact, I even had to take a cab that night because the stuff were too heavy. It was indeed a great day for all the bloggers who attended the Blogapalooza. Believe it or not, but more than the freebies I have received, it was great to meet other bloggers whom I thought I'd only get acquainted online, yet I had the opportunity to meet them personally. Dovi for one--we were online and since we both wanted to see each other in person, I told her I was seated near the stage and she came over my seat to meet me. I've also met new blogger friends at the Blogapalooza 2013. Some of them I knew better by their urls, while some I'm familiar with their faces.
Blogapalooza also gives online influencers like bloggers to help entrepreneurs to further promote their business. We were given freebies to help improve their brand/services or products. So that we can give constructive criticisms if necessary because we have experienced it on a first-hand basis. Blogapalooza is a venue for bloggers to get to know brands and businesses and at the same time help them to achieve their target market. As online influencers, I believe we owe it to our readers to give an honest blog review. Hence, it is also our job to let these entrepreneurs know what the consumer wants and we could do these by giving our personal views on our blogs. 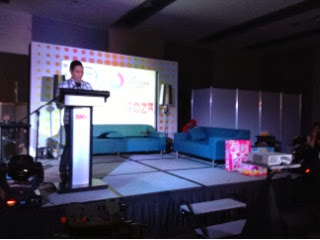 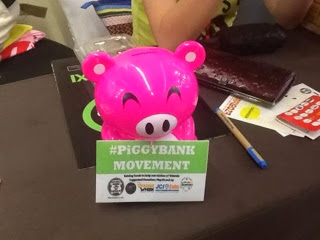 I no longer wonder why most bloggers considered Blogapalooza as one of the most anticipated events participated by folks from the blogosphere. I thank its founders Vince Golangco of When In Manila, Anton Diaz of Our Awesome Planet and Francis Simisim as well as all their staff for their efforts in putting up this event. I'd also like to thank all the brands, entrepreneurs and partners + sponsors of this year's Blogapalooza. That same night, we were also happy to note that the bloggers as well as everyone's joined efforts were able to raise Php82,000 on the Piggy Bank Movement for the benefit of those affected by Typhoon Yolanda/Haiyan.
It felt good that you were able to help in your own little way. Despite all the issues and intrigues that surrounds the blogging community, it's nice to know that we can all try to set those stuff aside just so we could help those in need. I went home that night with a smile on my face + feeling on cloud nine, knowing fully well that helping others wasn't beyond my means and because I'd make my family happy because I'd be sharing them the stuff I've gotten from Blogapalooza event.
Posted by Vance M. Ramos at 10:54 PM