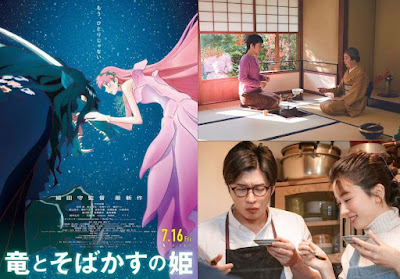 The Japan Foundation, Manila is bringing back the on-site screenings of its cherished film festival, the Japanese Film Festival (JFF), featuring 10 award-winning and must-see full-length films, from January 20 to February 22, 2023, in a number of locations throughout the Philippines, after two online editions due to the COVID-19 pandemic.

The Japan Film Festival, one of the biggest and most well-known film festivals in the nation that draws over 25,000 spectators each year, begins its on-site screenings on January 22 and runs through February 3 at the Red Carpet Theatre in Shangri-la Plaza in Mandaluyong City.

The festival opens with Belle (竜とそばかすの姫), a movie directed by HOSODA Mamoru and starring NAKAMURA Kaho and SATOH Takeru as voices. The 2021 animated movie follows the tale of Suzu, a high school student (Nakamura Kaho), who lost her singing voice after her mother passed away in an accident when she was young, an accident. One day, Suzu received an invitation from a friend to sign up for the virtual community "U," which has over 50 million users. There, she developed her own persona and rose to fame as the singer Belle all over the world.

Intolerance (空白), by director Keisuke Yoshida, follows the story of a junior high school girl who figured in an accident after allegedly trying to shoplift, then eventually died. The father, wanting to prove her innocence, doggedly goes after the manager, but then turns into a terrifying monster and chases down everyone involved. The drama film stars Arata Furuta and Tori Matsuzaka.

In Blue (ブルー), directed by Keisuke Yoshida, Urita loves boxing more than anyone but continues to lose. Meanwhile, his younger rival Ogawa is close to becoming the Japan champion and is preparing to marry Urita’s childhood friend Chika. Though everything he ever wanted is within Ogawa’s grasp, Urita continues to work toward his dream. Actor Kenichi Matsuyama plays the titular role.

And So The Baton Is Passed (そして、バトンは渡さ れた) narrates about Yuko (Nagano Mei) who has been raised by parents unrelated to her and has changed her last name four times. She currently lives with her father-in-law Morimiya (Tanaka Kei), but things are not going well. Meanwhile, the freewheeling Rika (Ishihara Satomi) has been showering her daughter with love, but one day suddenly disappears. And then Yuko receives a letter. This is a film by director MAEDA Tetsu.

In ANIME SUPREMACY! (ハケンアニメ!), Hitomi Saito works for a major animationproduction company. After giving up her stable career as a public servant, she joins the anime industry and has at last been given her first chance to direct a series called “Soundback: The Kanade Stone.” Despite her eagerness to make the most of the opportunity, storm clouds soon gather over the production floor. Yukishiro, the producer who handpicked Hitomi for the job, is also a tricky character who’ll go to ruthless lengths to ensure his “product” sells. Sure enough, he frequently clashes with Hitomi, who is determined not to compromise her creative vision. Directed by YOSHINO Kohei, the film stars YOSHIOKA Riho, NAKAMURA Tomoya, EMOTO Tasuku, ONO Machiko.

BLUE THERMAL (ブルーサーマル), a film by director TACHIBANA Masaki, is about Tamaki (Hotta Mayu) who wants nothing more than an ordinary life in college. Unfortunately, she damages a glider shortly after school starts and ends up taking a gofer position with the aviation club to pay back the damages. Tamaki becomes fascinated with the world of the skies from the moment she takes flight in the glider operated by club captain Kuramochi (Shimazaki Nobunaga).

BLUE THERMAL (ブルーサーマル), a film by director TACHIBANA Masaki, is about Tamaki (Hotta Mayu) who wants nothing more than an ordinary life in college. Unfortunately, she damages a glider shortly after school starts and ends up taking a gofer position with the aviation club to pay back the damages. Tamaki becomes fascinated with the world of the skies from the moment she takes flight in the glider operated by club captain Kuramochi (Shimazaki Nobunaga).

In Lesson in Murder (死刑にいたる病), Masaya Kakei attends a low-ranked university, a situation he finds depressing. One day, he receives a letter from Yamato Haimura, a high-profile serial murderer convicted and sentenced to death for nine of the 24 killings he had been accused of. Before his capture, Yamato ran a local bakery, which Masaya frequented while attending junior high school. Reaching out to Masaya, Yamato freely admits his guilt but insists the ninth conviction was a frameup and implores him to find the true killer. As Masaya delves into the case, the truth proves to be cruel beyond imagination. The film is directed by SHIRAISHI Kazuya and starred by ABE Sadawo and OKADA Kenshi.

INU-OH (犬王), a 2022 historical animated film by YUASA Masaaki, is about an encounter between Inu-Oh who was born with an unusual appearance and Tomona who is a young biwa (lute) minstrel. The two become inseparable friends. As they mutually foster one another&#39;s talents, they release successive hit songs and gradually rise to stardom.

In Every Day A Good Day (日日是好日), 20-year-old Noriko (Kuroki) and her cousin Michiko (Tabe Mikako) start taking tea ceremony lessons with Takeda, who has a reputation for being an extraordinary teacher. At first, Noriko is confused by the intricate rules, but after two years she comes to realize the profundity of the tea ceremony. Director OMORI Tatsushi casts YOSHIMURA Tomomi, KANAI Takaharu, and KONDO Takahiko in the film.

Launched in 1997, the Japanese Film Festival (JFF), formerly known and appreciated in the Philippines as EIGASAI, is presented and run by the Japan Foundation, Manila. Since then, it has grown to become one of the largest film festivals featuring a wide variety of cinematic delights from drama, anime, and mystery to recently released films. JFF also brings guests from Japan for special talks and discussions.