Repertory Philippines [REP] came about because of one dream—that dream of bringing world class theatre experience to the Filipinos. Half a century of existence is really something to be happy about as REP have remained a stable reputable theatre company to date. They’ve recently marked their 50th year in the entertainment industry by coming up with a two-hour show held at The Theatre at Soilare with 135 performers onstage and seven musical suites that gave audiences a glimpse of how the REP had its humble beginnings.

The 50 Years of Telling Stories was indeed a clear testament of the theatre company’s success. The two hour show highlighted everything important to every REP—from production staff, personnel, musicians, actors, directors and benefactors—practically all who contributed to the success of the said theatre company.
“REP will go on telling stories, training Filipino talents and sharing the best of theatre for years to come,” said Repertory Philippines president Mindy Perez-Rubio.

In its five decades of existence, REP has produced 80 seasons with 444 theater productions. Their home has moved from the old Insular Life Theater to the William J. Shaw Theatre in Shangri-La Plaza Mall and today, performances are made at Onstage Greenbelt in Makati City.

“Never in our wildest dreams did we ever think we’d be able to go this far. That we’d be able to reach our 50th year,” said Baby Barredo, REP’s chairman and artistic director emeritus. “But with God’s grace, REP will go on putting up more musicals and plays as well as continue developing new talents.”

REP also gave tribute to the legacy left by its founding artistic director, the late Zeneida “Bibot” Amador who undoubtedly instilled strict discipline among her artists. During the show, she along with others who had been a huge part of REP’s success was given an ‘In memoriam’ tribute for the contribution they’ve done for the theatre company’s success. Amador was REP’s founder, mentor, director and actress.
For the teens in the audience, REP has featured songs from Camp Rock which featured singer Morisette Amon and actor Markki Stroem. The night even got better with a perky production number of One (from A Chorus Line) which had well-choreographed production with Terry and Lally Aldeguer, Jo Virata, Jason Zamora and Enchang Kaimo, among many others.

REP also showcased and paid tribute to the production’s unsung heroes. “They were never seen onstage, but the shows were able to come to life because of them,” said Freddie Santos, segment writer and director. Everyone who contributed to the success of REP had been remembered: from the carpenters, make-up artists, stage managers and even technical people.

But what I loved the most was the performance of Mitch Valdes on stage during the Comedy Tonight segment along with Franco Laurel, JM Rodriguez, Jack Salud and Red Nuestro. Meridian International School Theatre professor and actress Pinky Amador also was a blast in her Putting It Together number which showed what REP does backstage before each performance.

As a REP fan, it was such a treat to see REP’s actors all together in one memorable evening. The likes of Carla Guevarra-Laforteza, Bart Guingona, Sheila Francisco, Menchu Lauchengco-Yulo, Cocoy Laurel and of course, one of my idols during my childhood years, REP’s homegrown talent, Ms. Monique Wilson—she was featured in a finale along with the original cast of Les Miserables. 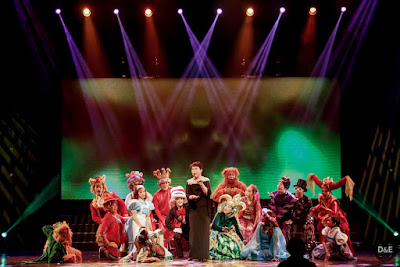 I’d also liked to commend Becca Coates who might just be the next big thing to watch out for in musical plays or theatre. I won’t be surprised if one day, she too, can make it big internationally. She was very effective in her portrayal of Agnes in REP’s recent production of Agnes of God where Coates played the title role.

During the curtain call, the “Reppers” (those who had acting workshops with the REP or anyone who had become part of REP) were called onstage to join the performers so they could all celebrate their 50th year  and share such rare moment as they take a bow before he audience.

It was just too bad that one of the greatest talents that REP has produced, Lea Salonga wasn’t there. Lea, just like Monique has started out with REP. At the time, Lea was reportedly in the US where she was a presenter for the Tony Olivier awards. But it would've been really complete if Lea was there. Anyway, there's Monique so that somehow made my night. Seeing her perform in such rare occasion made me happy just the same.

To REP, we hope to see more high-calibre performances and world-class musical plays and may your theatre company develop more fresh and amazing new blood of REP talents in the next 50 years. Congratulations REP on your 50th year!!! Can't wait for more season shows to come!