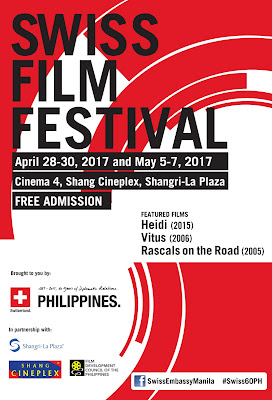 
If you're a fan of the best selling 1880's classic novel Heidi written by Johanna Spyri, you'll be delighted to see the story come alive on screen (not just in animation), it'll surely be a joy for you to watch this film. Heidi is a story about a young orphan girl living with her grandfather Alm in the Alps. Heidi's Aunt Dete takes her away to Frankfurt to live in an upper-class household as the companion of wheelchair-bound child named Klara. With everything new and strange to her, Heidi becomes lonesome and longs for her grandfather's company which led to her homesickness and brought her back home to the mountains. Klara then comes to visit Heidi one summer which causes Heidi's friend Peter to become jealous.

Rascals on the Road is based on a popular 1955 children's book by Swiss author Klaus Schadelin. It's the stor of four little rascals told through the eyes of 13-year-old Eugen. Eugen and his three friends go on a quest to follow the footsteps of "the biggest rascal of all time" Fritzli Buhler and the search for a long lost treasure. Their sudden disappearance leads to their parents to follow them and as the boys continue their rambunctious journey to Zurich, they begin to doubt if Fritzli Buhler even exists at all.

The most serious amongst the film line up for the first ever Swiss Film Festival at the Shang would be Vitus. Vitus is a film about a 12-year-old piano prodigy whose parents tend to suffocate their only child as they tried to help and support him with his God-given talent. His parents have high ambitions for him but all Vitus wants is to live a normal life, just like any ordinary kid. He decided to rebel and chase his own dreams with the help of his eccentric grandfather who's obsessed into flying his own aircraft. Directed by Swiss director Fredi Murer, Vitus won Best Swiss Film of 2006 at the Swiss Film Awards.

Catch these awesome Swiss featured films at the first ever Swiss Film Festival organized by Swiss Embassy Manila in partnership with Shangri-La Plaza, and Film Development Council of the Philippines.

So, save the date and enjoy the FREE MOVIE SCREENINGS! You know the drill guys, just line up at least 30 minutes before the show, and you're guaranteed with a seat. Seats are on a first come, first served basis.

See you at the movies guys!

For more information, call (02) 370-2500 local 593 or visit www.facebook.com/shangrilaplazaofficialfanpage. You may also get in touch with the Swiss Embassy Manila facebook page for more details.