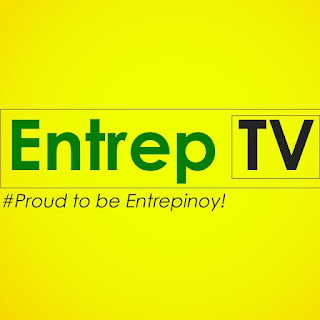 No matter how many books you read on starting your own business and being a successful entrepreneur, there’s nothing like a visual guide to help you embark on this journey. This is the concept behind Lara at Juan Media Productions Entrep TV. The brainchild of Jeddina “Jade” Bigay and her collab partner, another creative guy named Zyrus Ramos, the said television show aims to showcase one’s passion into something profitable. Young as they are, they know where their head is at, given anything, they'd do their very best shot. Oozing with lots of creative juices along with the proper skills and training + armed with this desire to think outside of the box, Jade and Zyrus started out Lara at Juan Media Productions (Larawan) on their own. Lara at Juan Media Productions is the creative team that caters 360 media services from print, events, digital and broadcast media that produces the television show Entrep TV.

Recent years have seen an onslaught of popular television series revolving around startups and entrepreneurship that are making it to every young entrepreneur’s ‘must watch’ list. An original television concept, EntrepTV is a show that leads you to the greenroom of the business world, where businessmen and women reveal how they took ordinary ideas and turned them into extraordinary businesses. EntrepTV tries to show that if you have the idea, the resources and the willpower, you can make things happen.

This must-watched series shows that being a successful entrepreneur isn’t all rainbows and butterflies. It broadcasts the raw, challenging and often ugly side of starting your own business. EntrepTV is divided into six segments, namely:


EntrepTalk where host and executive producer Ms. Jade converses with a successful entrepreneur who shares his or her experiences as well as personal journey before finally making it in the industry.

EntrePinoy is another unique segment of the show where freelancers or self-employed individuals or groups share their personal views on how they used their passion and skills productively.

Agri Pinoy shows the huge potential for the country in terms of its agricultural capacity. It aims to make the public aware that we can create business out of our own existing resources.

Juan Negosyo where they feature unique businesses in the hope to further inspire fellow Filipinos to start their very own business.

Pinoy Workshops where they feature various seminars on entrepreneurship with different topics such as time management, marketing and finance etc.

Pinoy on the go segment is where they feature the latest trends, events and what not.

Are you a startup or a professional working or perhaps an OFW (Overseas Filipino Worker) who wants to venture into business that is profitable? EntrepTV is a good platform for you to learn from the experts. The show will give you an idea as well as proper directions to further explore opportunities to develop new concepts on your business.

A good business venture starts with a good idea. A good idea doesn't need to be totally new but it has to be different or better than existing products or services and offered at good value for money to make your venture competitive. Business had to be innovative and relevant to consumers but at the same time should be affordable and profitable.

"The hardest thing we have encountered so far is manpower. Since we're a small team, we consider each other as family. But it has its disadvantages as well. We had to multi-task," says Jade who happens to be EntrepTV's host and Executive Producer.

Now on their third season (and counting) not to mention the blessing of Lara at Juan Media Production House in Teacher's Village Quezon City, Purple Plum Fairy thinks that with the rate EntrepTV is going, it seems that it has no other way to go but up. Congratulations to Lara at Juan Media, Ms. Jade Bigay and Zyrus Ramos for such a job well done!