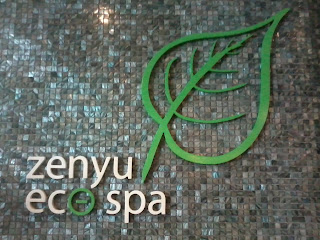 All substances are made of ions. Negative ions are atoms that have gained of negatively charged atoms and those that have lost electrons are positive ions.
Negative ions are normally near waterfalls, in forest, at open-air hot spring and other places where you feel refreshed and rested. Positive ions are often found in busy streets and many electrical appliances and places with stagnant air. Negative ions can be associated with rejuvenation, regeneration healing process, oxygen and wellness.


Zenyu Eco Spa means complete healing in Japanese. It’s not your typical spa because aside from the usual pampering and relaxation, Zenyu Eco Spa also offers healing component in the negative ion hot bed treatment among other things.

Ecoparadise Japan acknowledged the power of nature with studies on negative ions. A clean and fresh environment is free of bacteria and viruses. It has a balance of electrical charges in the soil and the environment.

Ecoparadise is present in seven countries namely: Japan, Singapore, Malaysia, Thailand, Indonesia, Vietnam and the Philippines.  And it’s only in the Philippines that they were allowed to offer other treatments since they’re located in Hotel H2O in Manila Ocean Park.

“It’s hard to explain what negative ions are, you’ve got to experience it yourselves because you can’t smell it, it’s invisible but it’s in the air,” says Dr. Eric Tan, Spa Manager of Zenyu Eco Spa.


Negative ions are charged molecules. It’s very big in Japan. Others sell ion beds (they’re making waves in our country too) even bulbs. How do they show the difference between eco-friendly bulb and the ordinary bulb? Simple. They put the bulbs together in a chamber and emit smoke on both sides. When they light up both chamber, the bulb with negative ion had the smoke totally disappeared. Why? Because the positive ion is a lighter molecule where all dust particles, bacteria and viruses all stick together.  Bacteria and virus connect to positive ions. When the negative ion combines with positive ions, they become heavy and just fall into the ground,” explains Dr. Eric Tan.

To prove his point, Dr. Tan even showed bloggers the small experiment of chicken, pork, cheese and egg on display which they had since April 5, 20120 but showed no signs of molds and decaying. The chicken and pork just dried up and the cheese remained its aroma without molds.
Ecoparadise Japan formulated a deoxidizing solution that combines plastic, paint, wax, bricks, tiles and other building materials. These infused substances mimic the bounty of nature and produce negative ions. As technology develops, the symbiotic relationship of soil and air had been displaced, causing more positive ions and free radicals to proliferate. Positive ions can mutate and wreak havoc in our immune system, allowing bacteria and viruses to affect us. Free radicals are also the major causes of degenerative diseases such as hypertension, diabetes and cancer.


The deoxidizing solution promotes the production of negative ions from these infused materials. Negative ions are free-air molecules that help stabilize the effects of free radicals and positive ions.

Zenyu Eco Spa even showed us our own health-state with their own high-tech microscope. The pattern of our capillaries shows how healthy we are. They show if you are dehydrated. Dehydration can be both physiological (it means you are deprived of sleep), you’ll also see it if you’re hypertensive…but once they put on a negative ion material, immediately you’ll see changes on your capillaries.


By the way, Zenyu Eco Spa also sells the amazing Ecoparadise Pirikare multi-purpose powder. It purifies sewage, river and seawater as it cleans. Pirikare powder is a multi purpose powder made from natural vegetable (soya bean) oil waste, purified water and an anti-oxidant solution. Used for washing laundry, as detergent, for a bath, to bathe pets, car washing, or even as a substitute for agricultural chemical fertilizer etc.  What’s so amazing about this product, you ask? Well, if you use this pirikare powder in your bath, the salts you obtain are of the high insulative effect, and if you use it as a tooth polishing powder, bad breath is eliminated. Discharged water can also be used to water plants. Pirikare effectively breaks down the bonds that hold dirt and oily particles together. As deoxidizers, it has anti-rust properties too. It is a high-yield fertilizer and eco-friendly pesticide.  This product was awarded Gold at the Eco Product International Fair in Singapore back in 2006. It’s a bit pricey, but with its numerous purpose, it’s all worth every cent.

We had the chance to avail of the services offered at Zenyu Eco Spa such as the hotbed negative ion treatment, fish spa and 60-minute massage.

Honestly, I think the negative ion hot bed treatment is better than going to a sauna. It’s also perfect for those who experience menstrual cramps or women suffering from dysmenorrhea. I had back pains from too much sitting for hours on the computer table. But upon trying the negative ion hot bed treatment at Zenyu Eco Spa, I went home feeling not just relaxed but happy that finally that lower back pain had instantly disappeared.