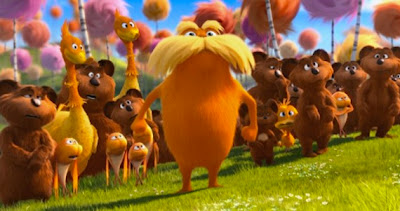 Kyle (my beloved nephew) always loved Dr. Seuss. As a growing toddler, I vividly recall he used to play an interactive CD on my mac mini where he first learned his ABCs and 1,2,3s as well as other educational stuff that a pre-schooler had to learn. And Dr. Seuss had never failed to make him laugh. We even had to see a stage play of The Cat in the Hat and watched it on its movie version, not to mention he’s had a few books of Dr. Seuss. It’s not surprising that he became a Dr. Seuss’ fan.

Dr. Seuss’ The Lorax had been digitally re-mastered into the image and sound quality for 3D. The crystal-clear images and powerful digital audio create a unique environment and experience where the audiences fell as if they are really part of the movie. So when Kyle had heard this news, he immediately asked if we could see the said film. The said film was from the same people behind Despicable Me; it features the vocal talents of an all-star cast lead by Danny DeVito, Zac Efron, Ed Helms, Taylor Swift and Betty White.
Dr. Seuss’ The Lorax is an adaptation of the classic tale of a forest creature who shares the lasting power of hope. The animated adventure follows the voyage of a 12-year-old as he tries to find one thing that will make him win the affection of his dream girl. To reach what he’s looking for, he encounters the story of Lorax, the grumpy yet charming creature who fights to protect his world.
Danny DeVito lends his vocal talents to the iconic title character of the Lorax, while Ed Helms voices the life of Once-ler. The film also features other international superstars former Disney’s High School Musical front guy Zac Efron as Ted, the idealistic youth who finds the Lorax and singing sensation Taylor Swift as Audrey, the girl of Ted’s dreams. Actress Betty White plays Ted’s wise Grandma Norma.
Dr. Seuss’ The Lorax is the third feature created by Universal Pictures and Illumination Entertainment (Despicable Me, Hop). Visit www.theloraxmovie.com or better yet catch it on cinemas starting this March 14.
Posted by Vance M. Ramos at 1:58 PM

Email ThisBlogThis!Share to TwitterShare to FacebookShare to Pinterest
Labels: Dr. Seuss, The Lorax