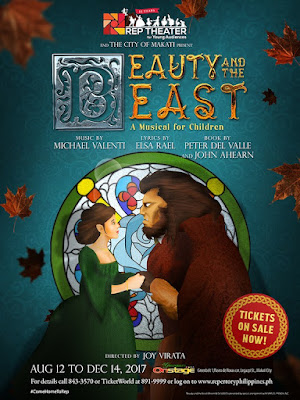 Musicals come in many forms and can be singular experiences in different world cultures. We have had our own great traditions of musical theatre and many of our classical and folk theatrical forms are rooted in music and singing. After fashion, it may be said that our films are well-crafted musicals. Yet the idea of razzmatazz...the grand spectacle in musical theatre is similar to that from Broadway/West End that has proved to be incredibly successful. Its allure and extraordinariness are bankrolled and bundled in an 'experience' that must be had, that must be consumed. Repertory Philippines' latest offering for their Children's Theatre, staging Beauty and the Beast, the original tale by novelist Gabrielle-Suzanne Barbot de Villeneuve. But of course, they also included some entertaining elements from the 1991 well-loved Disney film. Thus, this tale as old as time story also offers the same thrill and magical experience. 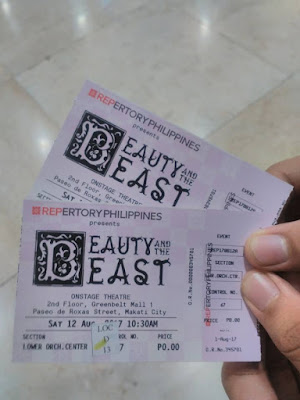 Sure, it may not be from Disney, but it's still as magical and awesome as I remember it to be. And as expected in any REP production, director Joy Virata, who is also the artistic director for REP, delivers a predictable, yet resounding spectacle, complete with spectacular sets, orchestrated lighting, choreography, and the works. 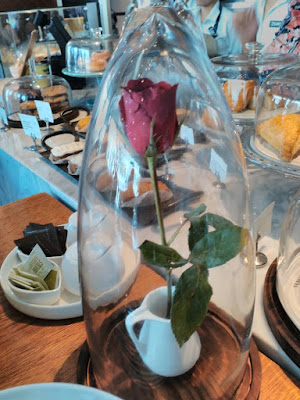 The production is also distinguished by its cast. The main cast is solid. They are competent singers as well as actors, thus doing justice to the nature of a musical. The star of the show is clearly Cara Barredo who plays Beauty, but George Schulze, the guy who played the Beast, is fairly good too. Cara [as Beauty] seems perfect in her role.

For REP's production of Beauty and the Beast, the story began with a merchant returning home from a failed business trip who sought shelter from a storm in a seemingly unoccupied palace with an enchanted rose garden. After the storm subsides, he plucks a rose from the garden to give to the youngest of his three daughters, only to discover that the palace and garden are enchanted and owned by a terrifying beast. The beast demands that the merchant send his youngest daughter, Beauty, to live with him in payment for the rose, a demand to which the brave maiden agrees. 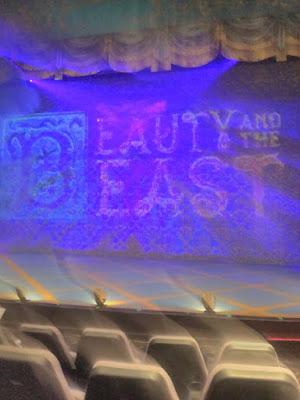 Schulze is one of the most articulate actors I have known and can deliver his lines with humour, irony or sarcasm as the case may be. The rest of the team, including the table, the chair, the roses, the candelabra, the silver rose—were all in their element. Quite remarkably, staging the said show can really be a challenge. The flip side though is that this is clearly an attempt, albeit a sincere one, to recreate the 'Disney live action' recent film [which had no less than Emma Watson (Harry Potter's Hermione Granger) as Beauty]. Comparisons in any case would be unfair. But could this REP version have been more challenging and persuasive? Perhaps.

I had almost forgotten this classic fairy-tale with its origins in France. When early in the show, Beauty gets exuberant about dreams and adventure, and being the 'odd' one in her family, I sat up. Aah, she brought me back to my childhood as I relish the 1991 Disney film inside my thoughts. Of course, she plies the familiar route eventually, but not before she has the guts to love a 'beast' and reveals that beauty need not be external. It's a perfectly acceptable moral by a spirited heroine for children to take home. Watch this production with your little ones, the bigger ones, or otherwise, and you are in for a captivating theatrical experience with the very capable and charming Cara Barredo leading the show.

On first meeting, however, the Beast seems nearly as dark. He’s a prince who was cursed and turned into a monster for having no love in him, and the best thing about the movie — as well as its biggest divergence from the animated version — is that he’s a strikingly downbeat character, a petulant and morose romantic trapped in a body that makes him feel nothing less than doomed. He’s played by George Schulze, a veteran stage actor who with the makeup and effects artists has done for his role as beast, the makeup artist does an extraordinary job of transforming him into a hairy hulking figure with ram horns, the face of a saddened lion having an existential meltdown, and the voice of Darth Vader or Batman.
Schulze’s transition to the gentler, kinder Beast was marked by moments of humor, some of which were more genuine than others, but the final transition, albeit full of smoke, is just awesome — especially for younger viewers.

Visually, the characterization makes a nod to the scowling-eyed Beast but he also comes off with a melancholy freak trapped in solitude. I loved that for a good long while, he’s a bit of a hard-ass, a man-creature who doesn’t dare to think that Beauty could love him. But then, under her gaze, he begins to soften, and his transformation is touching in a more adult way than it was in the animated version. The romance there was benign; here, it’s alive with forlorn longing. 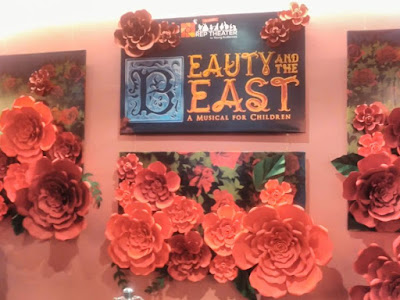 The Beast might prove his worth through devoted love, but Beauty proves hers through submerging her own passions and awarding herself to the most worthy suitor. The message is clear: Women should love the ones they’re with, no matter how seemingly repulsive ― it’s all part of the life of extreme self-sacrifice that makes them worthy of happiness and respect.
It truly is a tale as old as time as it comes to life once more via REP’s production of Beauty and the Beast. Like many fairytales, the story has evolved considerably during its journey from oral tradition to the page, to the screen and now on stage. Moreover, there is not only one literary version—but dozens. Today, as REP marks their 50th anniversary, as well as the 25th year of Repertory Philippines’ Theater for Young Audiences, they offer the spellbinding production of Beauty and the Beast. 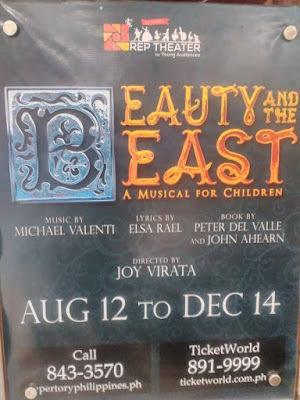 Repertory Philippines’ Beauty and the Beast: A Musical for Children runs from Aug. 12 to Dec. 14, 2017 at the Onstage Theater, 2F, Greenbelt 1. For tickets and inquiries, call Repertory Philippines at (02) 843 37 50 and Ticketworld at (02) 891 999, or log on to www.ticketworld.com.ph. For updates and show schedules, visit www.repertoryphilippines.ph, or like and follow @repertoryphilippines on Facebook and Instagram and @repphils on Twitter.