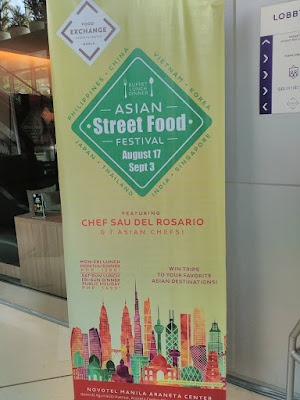 Street food reigns supreme in Asia. The best food is found not in fancy restaurants, but in the carts and stalls lining busy streets and quiet alleys. But of course, you’ve got to be wary of the food sanitation. It’s such a good thing that Novotel Manila understands this. Thus, they’ve come up with Asian Street Food Festival. They even made collaboration with celebrity chef and well-known Capampangan, Chef Sau del Rosario as they'd be featuring Asian Streetfoods with a twist at Novotel Manila's Food Exchange buffet spread. 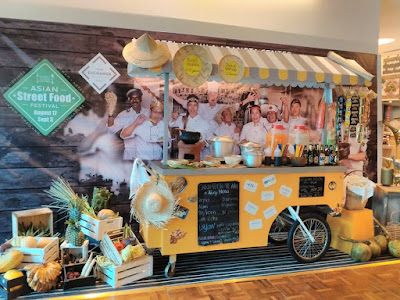 From August 17 to September 3, 2017, the Food Exchange at Novotel Manila Araneta Center will be featuring cuisines from eight Asian countries through the Asian Street Food Festival. Spearheaded by Filpino celebrity chef and restaurateur, Chef Sau del Rosario, eight chefs from the region will be preparing street food and classic dishes from their respective countries and will be featured on the buffet spread of the restaurant.

Street food in Asia is something that supports the development of cities, provides quick snacks for people in a rush, and enables poorer people with fewer cooking tools at home to buy food that is full of flavor and cultural history. Some of the found recipes are those which have gained international popularity, but their origins are rooted deep in Asian culture, as well as disputes between countries claiming to have created them.

The good news is that one doesn't need to spend as much on airplane fare, visa processing and passport just to experience authentic and delicious Asian street food. Just dine at Novotel Manila's Food Exchange Buffet and it feels like traveling the world with just a single plate.

With a whole range of texture and flavors you can find across each country, you're bound to give your palate some exercise. Here are a few Asian Foods you can try at Novotel Manila's Food Exchange:

Laksa--These are spicy noodle soups or curries made with thick rice noodles and Penang asam laksa is a variation on this theme, using sour tamarind and mackerel to conjure up its distinctive flavour. The dish is made more notable with the addition of lemongrass, spicy chilis, sweet pineapple, cilantro, onions and fresh mint garnishes. Penangites have loved their asam laksas for some time and with their loving additions to their favourite recipe, it’s safe to say it’s a strong marriage of geography and food.

Balut looks terrible, but it tastes terrific. In the Philippines, it is massively popular, and it becomes a must-try for foreigners. And for a newbie, it may come as a shock for you. But once you’ve gotten past its looks, it’s easy to get addicted to this night market snack.

This simple dish is readily available from food stalls throughout parts of Southeast Asia, but it was introduced by Indonesia, where it can be found nationwide and has been marked as their national dish. Originally eaten in Java, the consumption of this dish was born through adapting recipes for the Indian kebabs that were brought to the area by Muslim traders. Chunks of meat are skewered and grilled, often slightly charred to enhance the flavor, and are commonly served alongside peanut sauce. The dish can also be made using tofu, which picks up the deep flavors of the fire, especially when cooked over wood.

A variant of Japanese makizushi, the name gimbap comes from the two words ‘gim’ (dried seaweed) and ‘bap’ (steamed white rice). These moreish slices hail from Korea and vary in filling, but often contain fish, eggs and vegetables. The dish is notable as the rice carried a distinct flavor, which comes from being seasoned with salt and sesame oil before being made into gimbap.

Much like the tempura created in Japan, kwek kwek is formed from an ingredient that has been battered and deep fried. In this case, the ingredient is a quail egg, and the batter is bright orange, making it easily visible at food stands. Kwek kwek is a type of tokneneng, which is the general term for the Pinoy gastronomic tradition of battering then frying hard boiled eggs. Served aside a spicy dipping sauce, the battered eggs get their distinct orange color due to a spice called atsuete. If you’re in the Philippines and want to try traditional street meals but are too squeamish for the ‘balut’ roadside snack (a boiled, fertilized egg), then this is the safer option.

Here are some of the dishes I've tried:

The said food festival also coincides with the celebration of the 50th year founding anniversary of the Association of South East Asian Nations, or the ASEAN. Celebrate this special occasion through food. Here are some of the dishes we tried during the opening of the Asian Street Food Festival:

The Asian Street Food Festival will be available everyday for lunch and dinner at the following rates:

Novotel Manila also makes it more exciting, as dining guests will also get the chance to win family trips to selected Asian destinations including return tickets via Cebu Pacific Air and accommodation at partner Novotel properties in the region.

Complete the Novotel Manila Araneta Center experience by booking a staycation at the hotel. It's a great opportunity to bond with your family and friends while enjoying you Asian food adventure at Food Exchange. Book your room and table now by calling 990-7888.