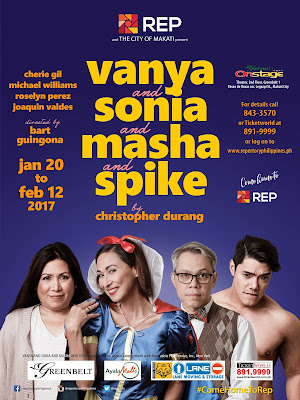 Highly accomplished stage and television actress Cherie Gil topbills the cast of Repertory Philippines' (REP) opening salvo for the year 2017, Vanya and Sonia and Masha and Spike. Incidentally, as part of REP's celebration of their 50th year, they have come up with this comedy which will run from January 20 until February 23 at the Onstage Theater in Greenbelt 1, Makati City.

I once had the privilege of getting up close and personal with Ms. Cherie Gil back in 2013. And I'd have to say it was absolutely surreal. She had a very strong presence but she's really very nice and down-to-earth too. Anyway, I've become an instant fan after that encounter. So I guess this new play of hers is something that I should also watch out for.

Awarded as Best Play during the 2013 Tony Awards, Vanya and Sonia and Masha and Spike is a witty piece of writing by Christopher Durang that cleverly mixes in Russian playwright Anton Chekov’s characters in what a New York Times reviewer called “a sunny play about gloomy people.” Fear not if you haven’t read a word from Chekov, because this quirky comedy of manners is meant to be relatable to any audience.

Vanya and Sonia and Masha and Spike is about the exciting adventure of three siblings – named after Chekhov characters by their academic parents, and who are all living their namesakes’ unhappiness. The character of Vanya is played by REP veteran theater actor and director Michael Williams, while Philstage Gawad Buhay awardee Rosalyn Perez takes on the role of Vanya’s sister Sonia.

These two siblings have never left the confines of their childhood home in Bucks County, Pennsylvania. Bitterly they complain about their uneventful lives, lost dreams and missed opportunities while they witness the glamorous escapades of their more successful movie star sister, Masha, played by Cherie Gil.

As the siblings’ fortune-telling maid, Cassandra (note the reference to the Greek princess who had the gift of prophecy, and a matching curse of no one believing in her), starts prophesying impending dangers, Masha arrives to visit one weekend while toting her new sexy boy toy Spike played by Joaquin Valdes.

The normally quiet household is thrown into one rollicking weekend full of lust, rivalry, regret, and the possibility of escape.

With veteran actor and director Bart Guingona as the head of the production, REP’s own version is definitely something theater fans shouldn't miss. The cast also includes REP actors Naths Everett as Cassandra and Mica Pineda as Nina. Vanya and Sonia and Masha and Spike will surely make you laugh out loud but at the same time make you ponder about the toils and troubles of life.

Catch REP’s first offering for the season as the company opens the curtains for its 50th anniversary.