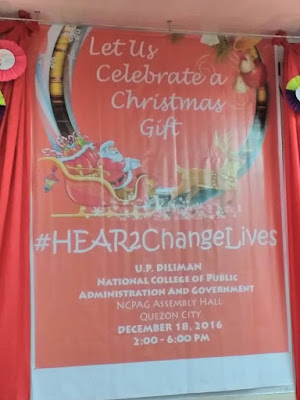 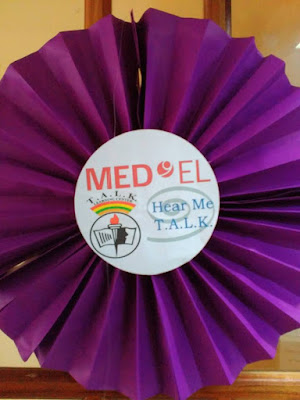 The Christmas party featured a number of dance and music items from children who benefitted from cochlear implants. Several participants showed how the cochlear technology helped them to lead a rewarding life. 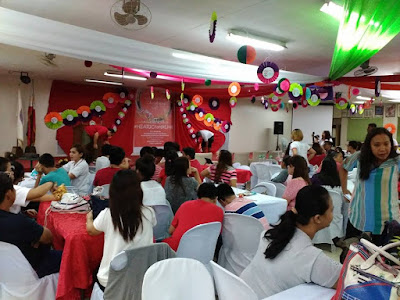 Ms. Maribel Mueller, Country Manager of Med-El Philippines graced the said annual Christmas activity who expressed her gratitude as Med-El Philippines celebrates its 20 years in the country. Ms. Mueller also thanked everyone for all the collaborative efforts in support of the cochlear implantation in the country and for bringing joy to the cochlear implanted children this holiday season.

Here are some of the production numbers presented during the Christmas party by students of T.A.L.K Learning Center from Tugatog, Malabon, St. Francis School VSA Arts Philippines Quezon City, the Med-El Philippines staff as well as selected parents and their children with cochlear implants.


Selected parents and students danced together


Some of the highlights during the #Hear2ChangeLives Christmas Party


Ms. Mueller together with her husband, the late George Mueller introduced cochlear implants technology in the Philippines. Ms. Mueller also gave an inspiring message on how cochlear technology has uplifted the lives of hearing impaired children across the country. She went on to express her heartfelt gratitude to all parties who committed time and resources to help these children. "Originally, Hong Kong was supposed to be where Med-El plans to build its headquarter in Asia. But I fought to have it here in the Philippines," shares Ms Mueller. "In 1996, we've put up Med-El Philippines to build a pathway towards a dream of hearing. Our dream is to have optimal benefit for a cochlear implanted child to live just like a normal person. With speech therapy, parental support and family system--we can make such dream a reality. A child implantee alone cannot manage to do it on his own. He needs the support of everyone."

For the past 20 years they have organized and sponsored different activities such as this Christmas party for cochlear implanted children and their respective families, giving children an equal opportunity to attend these events. With the goal to put smiles on these children's faces--they also promote the health, education and well-being of the Filipino deaf community.

During the said Christmas party, Med-El Philippines also spent a whopping total of Php 300,000++ for the raffle prizes alone. Ms. Mueller explained that what Med-El Philippines had given out as raffle prizes weren't ordinary stuff but items which cochlear implanted children will surely benefit from such as long cable for their implants (worth Php17k++ each), battery pack (worth Php22k). Goldilocks also gave away caramel popcorns while Domino's Pizza gave pizza gift certificates as raffle prizes too. As if that's not enough, one lucky implantee named Maryca Magbujos went home with the grand prize, a Rondo processor. Rondo is the world's first single-unit processor for cochlear implants. It is the latest technology and she can even swim with her Rondo now. Another grand prize winner was Rich Rencel Mariano who won an Opus 2XS, which happens to be the world's thinnest and lightest audio processor. Each time a name is called, you can really see each child's eyes light up!


In the Philippines alone, there is a ratio of 1:724 deaf children in the country. And from its humble beginnings, Med-El Philippines has recognized the need to provide long-term and life changing solutions to profound deaf children and their families. December 18, 2016 marks a new beginning for Med-El Philippines as they launch HearLife Foundation (HLF). The said foundation vows to fight for the rights and needs of the hearing impaired, whose only hope to hear and speak is through cochlear implantation. HearLife Foundation is a non-stock, non-profit foundation which will carry on the legacy of the Father of Cochlear Implantation in the Philippines (the late George Mueller).


Cochlear implantation in the Philippines has indeed gone a long way although there's still so much room for improvement and further development. In order to address the need for more hearing impaired Filipinos to benefit from the cochlear implantation technology, HearLife Foundation was put up in order to help assist them. HLF's goal is to support hearing impaired individuals to have the opportunity to listen and speak. The foundation vows to give assistance to candidates for cochlear implantation, those who can't afford speech therapy, batteries and the operation. "Yes, the HearLife Foundation will be here to assist and take care of their needs," says Ms. Mueller. Individualized speech and language services will be made available for them to have the opportunity to hear and speak.

HLF will be working hand in hand with both private and government agencies knowing fully well that with cochlear implant procedure they can help restore lives lost for the deaf and regain them again with the miracle of each cochlear implant technology through Med-El Philippines.