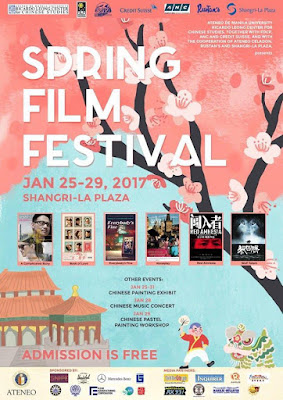 Movie enthusiasts once again look forward to the opening of the 11th Chinese Spring Film Festival 2017 slated from January 25 to 29, 2017 at the Shangri-La Plaza mall's Shang Cineplex. Six noteworthy film are lined up for this year's Spring Film Festival organized annually by Shangri-La Plaza in cooperation with Ricardo Leong Center for Chinese Studies at the Ateneo De Manila University and Film Development Council of the Philippines. The aim is to further encourage appreciation of Chinese culture and language in the Philippine society.

Deng is an elderly aregiver who is determined to remain useful despite symptoms of an aging mind, and insists on taking care of her two sons and mother despite their protests. In Red Amnesia (闯入者 / 2014 / Thriller / 110 min), her routine starts to get derailed when she starts receiving mysterious anonymous calls.

Wolf Totem is the story of a young Beijing student Chen Zhen among nomadic herdsmen of Inner Mongolia where he adopts a wolf club in an attempt to save it from death, The film was chosen as China's 2015 foreign language Oscar entry and adapted by bestselling author Lu Jiamin.

A Hong Kong university student in dire need of money takes a lucrative offer to become a surrogate mother for an elite couple. When the contract gets terminated, she refuses to give up the child and runs into hiding, until the biological father finds her, which turns the situation into A Complicated Story (一個複雜故事 / Hong Kong / 2013 / Drama / 107 min).

In the hit romantic comedy Book of Love (北京遇上西雅图之不二情书 / 2016 / Romance / 129 min), part of the Finding Mr. Right series, a casino hostess from Macau and a realtor based in Los Angeles cross paths and ultimately form a magical connection with each other all because they stumbled upon the same book.

Recently widowed Guan Zhiguo anticipates the annual summer sit of his four children, until their cancellation forces him to step out of his Beijing courtyard to visit them instead. Everybody’s Fine (一切都好 /2016 / Comedy, Family / 105 min) sees how a father discovers spending individual time with his kids lead to gaining much of the honesty and compassion that has been missing in their family. This is the second remake of a 1990 Italian film of the same name.

A comedy that leads to a chase all over Europe, Horseplay (贩马记 /Hong Kong / 2014 / Action, Comedy / 96 min) has entertainment journalist Mui tracking down the notorious art thief called Nine-Tailed Fox. The plot thickens as Mui gets stuck in quite an impossible situation – with the Fox asking for her help to recover the “Tang Dynasty Pottery Horse” and detective Cheung Ho seeking her assistance to catch the Fox.

The 11th Spring Film Festival will run simultaneously with more events to ring in the Lunar New Year at the Shangri-La Plaza Grand Atrium:

Admission is FREE on a first-come, first-served basis.

For more information visit Ateneo Ricardo Leong Center for Chinese Studies’ Facebook page or call 426-6001 local 5280 and 5284. You may also contact Shang at 370-2597 or 98 or visit www.facebook.com/shangrilaplazaofficial.