Vina at 30 Concert at the KIA Theater: Vina Morales' 30th Anniversary in Showbiz 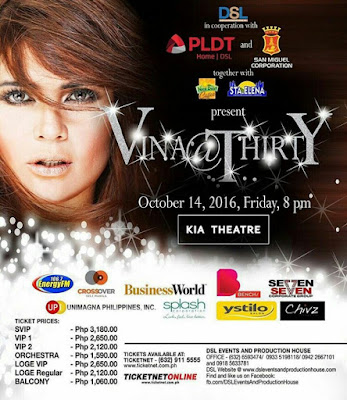 We’ve all seen Vina Morales grow up before our very eyes. She started out in showbiz industry as  a young provincial lass and managed by VIVA Films who actually saw her potentials back then. And the rest, as they say is history. Vina had nothing more to prove as an actress, performer, singer, and recording artist. As part of the celebration on her 30th anniversary in show business, DSL Events and Production House Inc. is producing Vina @ Thirty—a concert featuring The First Asean Ikon, The Ultimate Performer, Dancing Queen, The Ulimate Showgirl and Timeless Diva herself—happening on October 14, 2016 at the KIA Theater to be directed by no less than Mr. Johnny Manahan and choreographed by one of the most sought-after dancing guru, Teacher Georcelle Dapat-Sy of G-Force.


“Looking back, at the tender age of 9, I knew my heart was really set on singing and performing. I had no regrets on moving here in Manila from my hometown in Cebu. I was able to realize my dream in becoming a singer and was able to help my family. It was as if everything was written for me and it eventually fell into their right places,” shares Vina.

Below is an amateur video I've taken where Vina shows her versatility as a performer and singer:


Vina’s career skyrocketed from her transition on doing teen flicks to more mature and serious roles. Among the projects that catapulted her to stardom were “Nakagapos Na Puso” with Sharon Cuneta, “Ang Utol Kong Hoodlum” with ex-boyfriend Robin Padilla, “Anghel Na Walang Langit” and “The Sarah Balabagan Story., and “Bonifacio: Ang Unang Pangulo” (again with Robin Padilla who played the title role).” She recently starred in ABS-CBn afternoon drama “Nasaan Ka Nang Kailangan Kita.” She also did supporting roles for the series “Born For You” and co-hosts ASAP every Sunday afternoon.  Vina’s also a successful entrepreneur with her Ystilo Salon that has a lot of branches nationwide.


Talents in showbiz would usually come and go. What was Vina's  staying power? “There's no secret really. I really feel blessed that I’m still around and with all the blessings coming my way, I have no right to complain. Tinatawanan ko lang ang mga problema probably because my family’s all-out support keeps me strong, plus with Ceana (her daughter) around, I know I’d be fine,” shares Vina during the press conference for her upcoming concert.

"I guess whatever it is that I may have, it's all but a product of my own blood, sweat and tears. Lahat po ng ito, nasaan man ako ngayon ay pinaghirapan ko. It just didn't come into my lap, I did something to achieve them."

“What I’ve gone through recently wasn’t a joke. But it keeps me fighting, it makes me tough,” she adds. She doesn’t deny that there are times when she would cry about it. But being an optimistic she’d rather see thing positively. “I trust that the Lord will never forsake me. I have never wronged anyone. I know I’ll be able to get through and all these things will soon be over.”
Vina's upcoming concert "Vina @ 30" is her tribute and thanksgiving to her loyal fans who have supported her all these years. It is fitting for Vina to celebrate her three decades in showbiz with an anniversary concert. After all, not everyone can say that they've lasted that long in the entertainment industry.

The one and a half concert will see Vina's performance at her best. There will be videos shown in Vina's different phases as well as highlights of her career from the past up to the present.

Another surprise for her fans, Vina says she will soon release an album also called Vina30 under Star Records in October. Apart from that, she will be seen playing an important role in the musical Rock of Ages.

Asked what advice can she give to showbiz newcomers, Vina has this to say, "You have to learn how to love your craft. Be passionate about it. Grab the opportunities that come your way. Because if pa-diva ka, there will be lots who are willing to take your place. So it's important to always be professional."