Ai Ai Delas Alas and Lani Misalucha together in a concert called “Ai Meets Lani: Lani May Ai?” at the KIA Theater on September 17, 2016 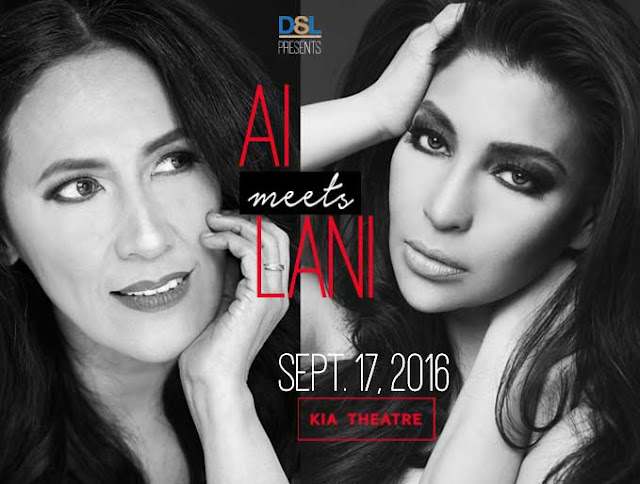 “I had to admit I missed performing in a concert. The last time I’ve had a major concert was back in 2010. I guess what made me put off performing in concerts for a long while was because of the fact that I had gained weight. I didn’t had the endurance to go dancing while singing, I wasn’t fit enough,” confesses Comedy Concert Queen, Ms. Ai Ai Delas Alas during the press conference for her and Asia’s Nightingale, Ms. Lani Misalucha held at Jet 7’s Bistro recently in line with the promotion of their upcoming concert dubbed as "Ai Meets Lani: Lani May Ai?" to be held at the KIA Theater on September 17, 2016. And for someone who had totally changed her lifestyle (180 degrees from her previous lifestyle) as well as eating habits—Ai Ai is now ready to perform onstage again as she’s back in her ‘fighting form’. She had recently received a lot of compliments after showing off her curves on her official Instagram account where Ai Ai had her photo taken in a two piece swimsuit. At her age, Ai Ai had proven that it’s never too late to lead a healthy lifestyle.


During the said presscon, Ai Ai says it’s always a joy for her to go back to what she considers her first love—doing concerts—because it’s something that has made her into who she is today. She wouldn’t be called the ‘Comedy Concert Queen’ for nothing (Trivia: It was the Concert King Martin Nievera who actually coined that title to her back in the 90’s.).


But what probably excites Ai Ai the most is her first ever chance of sharing the same stage with none other than Lani Misalucha. "I've always been a fan of Lani. She even sang at my wedding before. I'm elated to be given this chance to perform with Lani onstage and we're going to have a showdown, I can't wait! I promise we'll have a good show and people will go home with smiles on their faces and lots of positive vibes," Ai Ai shares.

This is the first time that Ms. Ai Ai delas Alas and Ms. Lani Misalucha will team up together. The combination will totally be a big hit. Imagine Ai Ai's outlandish humor will be challenged by Lani's powerful singing voice. Together they will be bringing the house down with their lively and good-natured banter mixed with different repertoire.

Aside from being Asia's Nightingale, Lani is also known for being the 'higa queen,' because she used to sing high notes while lying down, hence, she's called as such. Lani will render her popular heart-warming songs that will surely tug at your hearts while Ai Ai will definitely tickle your funny bones as she sings and dance upbeat songs. Brace yourselves to laugh, cry, love and enjoy one hell of a great show. Produced by Concert Queen Pops Fernandez, Ai Meets Lani: Lani May Ai? concert is a one-night only performance you shouldn't miss!

Here, Ai Ai invites everyone to come and watch their concert:

Don't miss this chance to see the two icons as they perform together for the first time. The said concert will be a pre celebration of Ai Ai's  birthday while it will also be Lani's 20th anniversary in the music industry. The show will be directed by Floy Quintos with musical direction by Jimmy Antiporda. "Ai Meets Lani: Lani May Ai?" concert will be happening on September 17 at the KIA Theater, Cubao.