Calling the Attention of LRT and MRT Administration and DOTC: PleaseMake the Philippines a PWD-Friendly Country 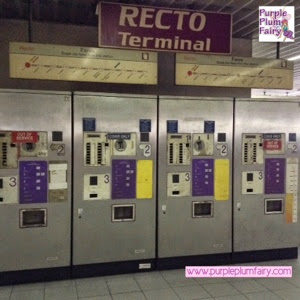 They say you can only empathize with someone when you have experienced it yourself; or only when you are in their shoe. This is true in my case. I had never even cared about the rotten system of LRT and MRT train administrations until my own Mother became a person-with-disability because of an accident. When Mommy became a PWD, that's the first time I had been fully aware of the crappy system that the Philippines have for someone like her. I realized the country did not have much heart for PWD's. Imagine the trains, both LRT and MRTs had elevators but had become "permanently out of order". Luckily for MRT, some stations do have functioning escalators, but not at all times. Most of the time, it's the same with LRT, especially the LRT Line1. 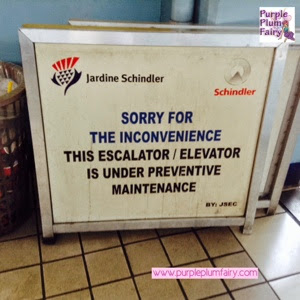 When my Mom needed to have her physical therapy sessions at Qualimed (a private clinic in front of Philippine General Hospital (PGH), she needed to be traveled from Quezon City to Manila almost everyday. And at the time, she couldn't even walk! You could just imagine how difficult life had been for us. Every physical therapy session, my mom had to endure standing for more than an hour just to get a cab going to Manila. Of course, the fastest way to get to PGH was via two trains: LRT2 + LRT1. And because we were oftentimes declined by cab drivers, I had no choice but to make my Mom take the trains going to PGH. It was so difficult for her to do so--she still had edema (watery swelling) on her foot and still couldn't walk that much. Now, you might be wondering why at PGH and not some nearby Quezon City hospital? That's because we didn't had a choice. It was Ayala Land who insisted we go to Qualimed for her therapy and because they were the ones who had paid for the bills (since the accident which left my Mom disabled happened at Ayala Land owned extreme adventure park in Porac, Pampanga called SANDBOX. 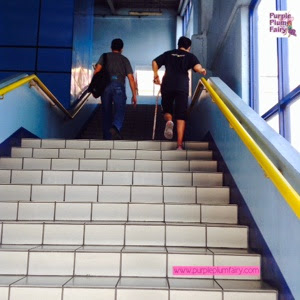 Here's a photo of my mother who's got an orthopedic disability due to an accident trying her way up the stairs because the elevators at LRT Stations are "PERMANENTLY OUT OF ORDER". 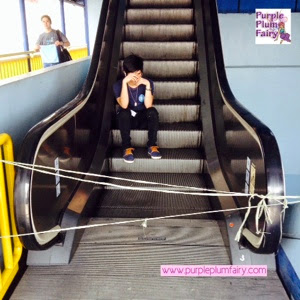 A guy here uses the "permanently escalator from Doroteo Jose station to vent out his emotions" just so the escalator will have some sense of "purpose". 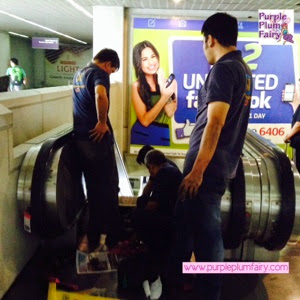 I thought after seeing these men, the escalators will be restored and repair, but to no avail. 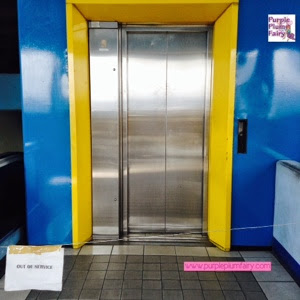 One of the 'PERMANENTLY' OUT OF ORDER ELEVATORS. 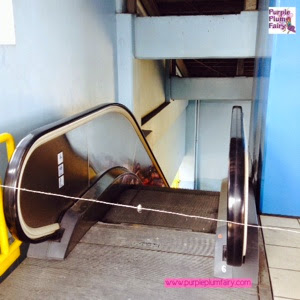 ANOTHER 'PERMANENTLY' OUT OF ORDER ESCALATOR.

Anyway, there was even one time at Anonas LRT2 station, it was raining and the floors were wet and somewhat muddy. A guard asked me to transfer coach from the Senior Citizens + PWDs coach to a regular one. He asked me if Mom and I were together. I said yes--but still he asked me to leave the first coach and so I did! Albeit with a tinge if hesitation. Mom left riding the train on the first coach but I was left at Anonas Station. I had to wait for three trains (they were jampacked with commuters) before I was able to finally ride the train. At the time, Mom was still recuperating from an operation on partial hip prosthesis. I shouldn't have left my mom. I couldn't keep still, what if my Mom tripped or fell, she shouldn't experience those anymore because of her condition (she had fractured her right femur bone due to an accident and now uses an artificial prosthesis.) I wanted to slap the arrogant security guard at the Anonas LRT2 station for making me leave my Mom. But I was able to control my temper. If something bad had happened to my Mom, I wouldn't forgive myself for allowing her to ride the train on her own and for listening to that foolish guard at Anonas LRT who thought he's doing his job right.

Sure, there were supposedly 'wheel chairs' available in LRT stations but to no avail, the wheelchairs are often seen as a place where employees would put their bags or backpacks instead of being properly used to help a PWD. As a commuter, I could only go and mutter: "Tsk, Tsk, tsk!" Such wheelchairs could only do as much. 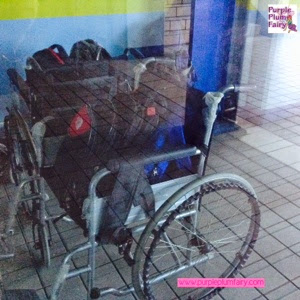 Are the wheelchairs for the bags and luggages of LRT and MRT employees? 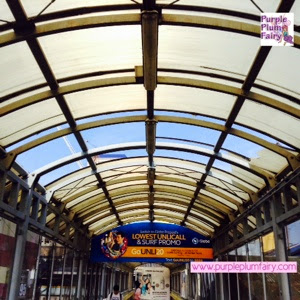 How about the roof of the pathway or bridgeway connecting LRT2 and LRT1?

There was a recent hike on both LRT and MRT fares. Personally speaking, I wouldn't really mind the said fare hike if only they could provide at least some sense of QUALITY in terms of their services, operating elevators, escalators, clean public toilets and perhaps guaranteed seats (even for PWDs coach alone). But the nerve to do the fare hike with all such negligences. LRT and MRT Admins, my question is : how long will it take to have the elevators and escalators to function and to operate when the signage which says "under renovation/out of order" had been there for several years? In fact, my cousin who had been taking the LRT since grade six (she's now in third year college) said that the last time she had seen the elevator operating well was during her elementary days. She's still taking the trains now but hasn't seen the elevator connecting the LRT Recto to LRT Doroteo Jose elevator and escalators functioning. As a commuter, how long are we going to wait for these elevators and escalators to be repaired? Decades? Centuries? Oh, c'mon, people! Why did you guys put up an elevator and escalator if people/passengers won't be able to use them anyway?

And what about those non-working ticket vending machines on both MRT and LRT2 stations? Didn't they spend a lot of money for these ticket machines? What are they now? They're mere junks occupying space in both MRT and LRT2 stations. The admins of these trains can't even buy batteries for the wall clocks installed in different train stations. What are they gonna do with them? Can't they be repaired as well? How could you managed to raise the fares of these trains, to think you know that each time a commuter rides the train, especially the MRT, he or she endangers her life since the Japanese experts who came to check on the trains said that "MRT trains are no longer safe". Poor Metro Manila commuters had no other choice but to ride such old, rusty and unsafe trains because it's way cheaper and faster than buses. 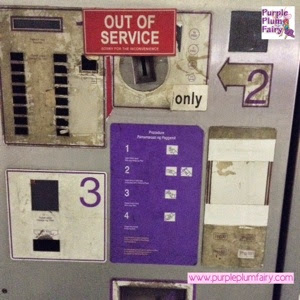 I've heard stories that this so and so politician/government official attempted to ride the MRT/LRT to be able to experience how difficult it is to be an ordinary citizen as they commute on a rush hour. But still, since they were easily recognized by LRT and MRT officials, they were still given special or VIP treatments and therefore did not meet the main purpose of such action. They were not able to see what they wanted to experience in the first place. But if only these government officials would see and experience themselves the harrowing experience that every Filipino commuter had to go through each and every day in their lives just to get to their office or destination, I doubt if these government officials could stand it. Imagine having to wake up so early to get to the office. You'd have to fall in line as you buy for your ticket, another queue again as you enter the MRT/LRT, then queue again as you ride the train---the lines are horrible and trains are jampacked! And that's not all, Filipino commuters usually whisper a prayer before squeezing themselves on the train coaches because they know the fact the trains are now unsafe for public's use. But like I've said, they have no other choice, so because Filipinos are naturally resilient, they'd just grin and bear it.

Nowadays, despite the fare hike on both LRT and MRT trains, we no longer have "rush hour" because every single hour is one. Meaning to say, no matter what time you ride the train, the volume of passengers are all the same. They say that with the recent fare hike, the positive side of it (fare hike)will be felt around September of this year, 2015--yes, we'll all have to wait for nine months. I pretty much doubt if we'll ever notice it. 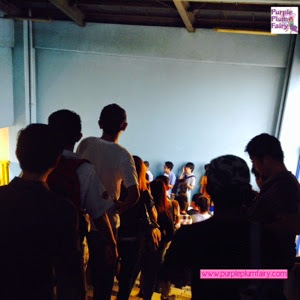 The ling lines people had to go through each and every day. 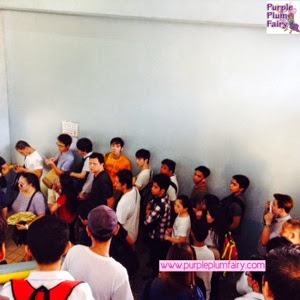 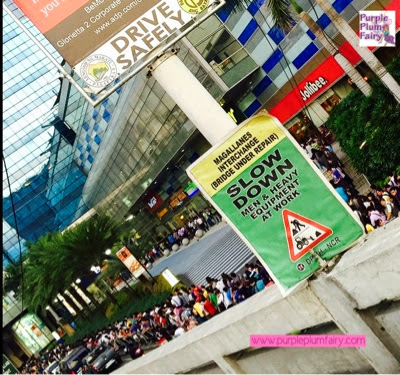 Do you see the number of people at the Magallanes MRT Station? Yes, the queue is for the MRT ride going North bound.

I'm not quite sure if you guys are able to relate with my grievances against both the LRT and MRT admins, but I do hope that through this blog writeup, some people would be able to look into the issue I have raised on this post and hopefully take an action. My wish for the Philippines is to become more PWD-friendly in terms of both values and facilities specifically for the LRT and MRT trains. Singapore and Japan are good example of PWD-friendly countries. Why can't the Philippines be like them? I am praying that with the recent visit of His Holiness Pope Francis, it will give Filipinos more compassion and mercy to those with disabilities.

How about you, what do you think should be improved to help make our country more PWD-friendly?
Posted by Vance M. Ramos at 6:29 PM

Email ThisBlogThis!Share to TwitterShare to FacebookShare to Pinterest
Labels: Department of Transportation and Communication, LRT Stations, Mass Transport in the Philippines, MRT Stations, Persons with Disability