Astro-Portraits, Tattooing, and Spoken Word As Yet Unwritten 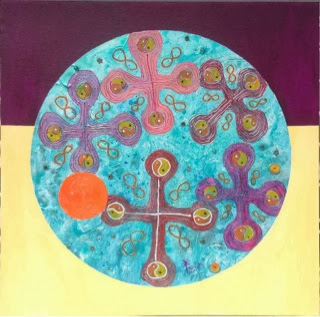 Three artist-run initiatives converge in an exhibition called As Yet Unwritten. The project is organized by Art Tempo Manila, founded by artist Juno Parungao. The uniqueness of Parungao's astrological portraits has endeared many patrons-- among which include actor Jeffrey "Epi' Quizon, multi-awarded writer Lito Casaje, and maestro Fernando B. Sena. Another luminary in the Manila art scene who has his own portrait by Parungao is musician and Astrological Friends member Heber Bartolome, who inaugurated Parungao's solo exhibit of astrological portraits in 2011. The artist creates the portrait based on the individual's circumstances of birth, personal color preferences, and philosophical ruminations. Collaborating with Parungao is Kristian Jeff Agustin, an independent publisher and poet who recently returned from his studies in Westminster, London. Agustin contemplates on how the skies may mean to mortals. For the exhibit, he uses video and performance with spoken word to give voice to celestial bodies or introspective personas. On the other hand, Jean Pierre "Dyani" Lao proves that tattooing is an art form on skin worthy of recognition. Lao garnered the Gawad Dominador Castaneda Award in year 2000 for his thesis entitled "Ritwal" from the College of Fine Arts in the University of the Philippines Diliman. His intricately rendered tattoos of mythical beings and celestial bodies are the results of his solid research on Filipino indigenous practices. These are then rendered in limited-edition prints and captured in photographs. For guest curator Laya Boquiren, "As Yet Unwritten presents three contemporary artists' visual articulations of place-based myths and the residual elements of pre-colonial interactions. The artists and I are interested in how these may be juxtaposed with ancient myths that examine the influence of celestial bodies on both individuals and shifts within the history of humanity." For the collaborators, the exhibition as a whole underscores how destinies that are as yet unwritten intersects with oral histories and narratives that have been passed on across time and places, as interpreted in images and the spoken word. Hosted by the GSIS Museo ng Sining, the exhibit will be launched on February 20, 2014 at 6:00 pm and will run until March 12 in celebration of the Philippine National Arts Month. For more information, see the exhibit page through facebook.com/asyetunwrittenexhibit. 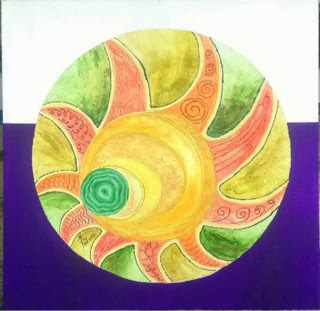 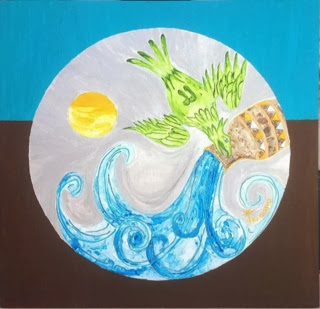 The Project
The project is a gathering of three artists each with their own independent initiative: Jean Pierre Lao, who garnered the Gawad Dominador Castaneda Award in 2000 from the University of the Philippines Diliman College of Fine Arts; Kristian Jeff Agustin, an independent publisher/poet who recently returned London, and works freelance while teaching in the University of Santo Tomas College of Fine Arts and Design; and Juno Parungao, who spearheads Art Tempo Manila. Prints, astro-paintings, video and performance are carefully juxtaposed to unveil celestial bodies, unlock myths of the past, and articulate the intangible stories of our time and place. Art Tempo Manila is the main organizer of this exhibition. Laya Boquiren is guest-curating the show. Hosted by the GSIS Museum for the National Arts Month, the project celebrates the solidarity of independent creatives. Support will help empower artist-run initiatives. For more information, visit the exhibit page through facebook.com/asyetunwrittenexhibit. 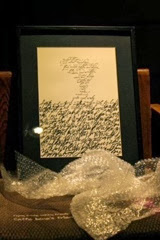 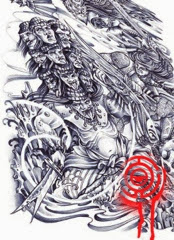 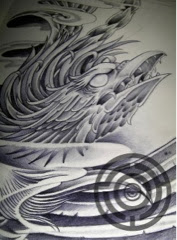 The Collaborators
About Juno Parungao
Artist Juno Parungao founded JIV Manila many years ago, has had several group and solo shows to her credit, and now spearheads Art Tempo Manila. Each of her astrological portraits reference the influence of celestial bodies on the individual who commissions the piece, making the approach to the art object quite personal and unique. The artist creates the portrait based on the individual's circumstances of birth, preferences, and philosophy. Her visual repertoire is unusual. Writers would often describe the practice as "esoteric". But then the artist's embodied art practice is part of a holistic approach to life. The non-figurative images resist the idea of portraits as realistic, for art is simply measured along degrees of abstraction. The artist paints these images to provoke both feeling and looking as an intellectual activity. Parungao is currently teaching in the Meridian International School and is an accomplished personality development consultant. She is completing her doctorate at the University of the Philippines Diliman.
About Jean Pierre Lao (from the artist's website 2013)
Jean Pierre Lao is an alumnus of the University of the Philippines College of Fine Arts. He received the “Gawad Dominador Castaneda” for Best Thesis in 2000 entitled “Ritwal”, discussing concepts on myth, mysticism, beliefs and the afterlife. His artworks “Memento”(2001), and “Angkan ni Kabunyan” (2000) were finalists on the annual Philippine Art Awards, exhibited at the Manila Metropolitan Museum. For almost seven years, Lao was a visiting faculty teaching Print-Making at the Philippine High School for the Arts (PHSA) in Mt. Makiling, Laguna. Later on, from 2006 to 2010, he was hired as the Head Tattooist of Tribal Gear HK/Macau. Apart from judging numerous tattoo competitions across the country, Lao was a speaker/ facilitator of “Tattoo Machine Principles” in a seminar for Filipino Tattoo Artist done at the Department Of Health in 2011. He was also a speaker in the annual Neo-Angono Arts festival, for “Ritwal ng Batek:  A Study on Northern Filipino Traditional Tattoo Motifs” in 2011. His first series of Tattoo Flash prints were exhibited in 2010 entitled “Set One”, a two-man show with fellow tattoo artist Oman Daluz, with a genre of Asian mythology and oriental beliefs. “Indelible Ventures” is his first solo exhibition. Jean Pierre is actively producing indelible creations in his own tattoo studio located in Cubao Expo. He prefers to be called Dyani.
About Kristian Jeff Agustin (from the artist's website 2013)
Kristian Jeff specializes in visual art, graphic design, multimedia, and film; occasionally writing songs, theatre pieces, and 'love poetry'. Born in 1984, the Year of the Rat, he is considered a well-rounded 'Cancerian' who delves into art and poetry as an effective means of self-expression and learning. He accomplished his Master's degree in Visual Culture at the University of Westminster, London in 2012, after completing his dissertation on 'social media interventions in nation-building and subject formation'. In 2006, he obtained his Bachelor's degree in Art Studies at the University of the Philippines, where he co-founded the Sirkulo ng mga Kabataang Artista (or 'Circle of Young Artists') in 2002 and served as its Artistic Director from 2004 to date. Recent collaborations include: his calligraphy work in Fishes of Light / Peces de Luz (2013) by lauded Filipina writer Prof. Marjorie Evasco and award-winning Cuban poet Alex Fleites; his libretto Ageless Passion (2011), a musicale with original music by Filipino Maestro Ryan Cayabyab; and his calligraphy, logo design and concept art for Earth.O (2012), a transmedia storytelling launched in London by Malaysian writers Yen Ooi and Ari Abraham. He is a member of The Poetry Society, a UK charity institution. 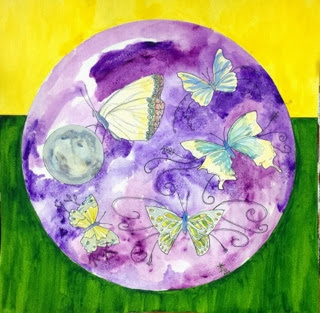 Even my own astro-portrait will also be a part of this exhibit. Shown above is my personal astrological protrait made by Juno Parungao. Based on my own birth chart, fave purple color and my fondness for butterflies--this astro portrait exudes this blogger/writer's personality perfectly.
Catch more of Juno Parungao's unique Astro Portraits along with two other artists beginning this February 20 at the GSIS Museum. For more information, please visit www.arttempomanila.com.
Posted by Vance M. Ramos at 4:02 PM