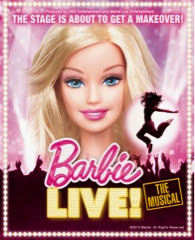 I've always been a Barbie Fan. There's nothing like dressing the well-loved All-American doll with fabulous clothes like party dresses, beach bikinis, glam night out rock outfits to whatnot. I've never seen a girl who does not like Barbie. I remember when I had my very first Barbie--she was dressed in my favorite color purple gown and she looked really gorgeous with her long locks. I wished I had a Ken to pair her with, but at the time, it was only Skipper and Barbie's friend Midge that I had. Playing with Barbie is some kind of a rite of passage for young little girls. I think at some point, all girls had gone through that stage of being a Barbie fan. And if you're like me, there are some things that you simply can't outgrow--I confess I still love Barbie at my age.
If you love Barbie and you're a die-hard fan, make the holiday season more memorable by seeing her live in person at the Barbie Live The Musical! happening this December 11 to 15 at the SM Mall of Asia Arena. It's going to be an exciting way to see and meet Barbie and her circle of friends through this musical. Plus Ken will be there too. Come and join Barbie in colorful journey and learn the value of confidence as she helps her best friend Teresa in this spectacular once-in-lifetime Barbie musical treat. Barbie Live! features awesome musical production numbers and awe-inspiring songs. Non-Barbie fans will even be converted into one after they watch the said show.
As an entertainment powerhouse, the Barbie® brand has been bringing fans of all ages engaging content for decades. Now, in collaboration with EMS Entertainment, Barbie will bring fans a new opportunity to sing and dance with the introduction of an all-new musical,Barbie™ LIVE! Barbie LIVE! is an engaging production featuring contemporary music with empowering lyrics, energetic choreography and a modern storyline that will appeal to fans of all ages. Barbie LIVE! debuted last September in Singapore and will travel Asia through 2014. In Manila, the show will be staged at the Mall of Asia Arena from December 11-15, 2013 with 11 performances only.

“Together with Mattel we have put an incredibly talented team together which created an unforgettable show for Barbie fans around the world,” says Christoph Rahofer, President and CEO of EMS Entertainment. “Barbie LIVE! will give fans the opportunity to engage with the Barbie brand while spending time with their families and friends making memories thatwill last beyond the stage.”

“Barbie LIVE! will delight generations of Barbie fans and will leave the audience feelingentertained and inspired,” said Lori Pantel, Vice President, Barbie Global Marketing. “EMS Entertainment has brought together an experienced, industry-leading creative team and brilliant cast to bring this fantastic story to life in a fun and magical way.”

With a talented cast of 19 singers and dancers, dazzling costumes, energetic songs and awe-inspiring sets, Barbie LIVE! is a must-see for musical fans of all ages.

Tickets for Barbie™ LIVE! is now available in all SM TICKETS outlets located in all SM Cinema ticket booths. For schedule and ticket information, visit www.smtickets.com or call470 2222.