BALIK-TANAW KAY FPJ: REMINISCING THE MEMORIES OF THE KING

The past year has certainly been favorably eventful as it is memorable. With years of great milestones come some occasional tragedies, such as the case when our beloved King of Philippine movies, the late Fernando Poe Jr. passed away several years ago. And as if it wasn’t enough, the comedy king, Dolphy also passed away early this year.  Both great men served as pillars in the entertainment industry. They were surely missed by everybody including their fans from around the world. 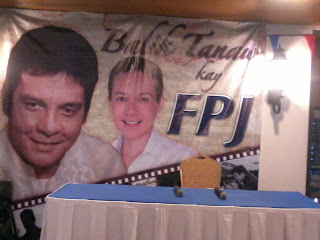 There were some audio visual presentation on the highlight of the late FPJ’s life, there were also some sharing brought about by the stories of FPJ’s former assistants and writers. But the event culminated with the presence of FPj’s daughter, Grace Poe-Llamanzares who had a Q and A with the bloggers in audience.  There she had shared all her future plans and her desire to become a public servant, something that her dad wasn’t able to accomplish during his lifetime.

Purple Plum Fairy thanks AbbieAbadiez for the invite.