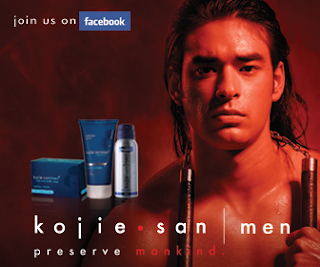 FACE VALUE. Most of the time, people gets easily judged based on superficial alone. That’s why it’s no longer surprising why people in general always try to make an effort to look good. When one looks good, ultimately it will also make you feel good as well. Thus, it helps boost your morale and builds your self-esteem. It had always been easier for women. If you weren’t exactly blessed with good genes, proper makeup application could do wonders to help conceal whatever it is that you need to hide and highlight whatever asset that you may have.


However, that is not how easy it is for men. With men, there’s definitely more challenge what with the receding hairline, saggy eye bags, blackheads and whiteheads, oily skin that eventually leads to acne—these are but some of the usual problems with men.  Fortunately, men seemed to have seen some ray of hope. Even guys nowadays make an effort to become more conscious of their looks or appearances; thus, the rise of metrosexuals.

Ever heard of such a term?
Metrosexual |ˌmetrōˈsek sh oōəl|
noun
a young, urban, heterosexual male with liberal political views, an interest in fashion, and a refined sense of taste.

Metrosexuals are real guys who have sort of embraced vanity and good hygiene. They are the ones who regularly have facial treatments (yes, that includes “the painful pimple-pricking part”), pamper themselves with body massages in men spa, and does religious bench warm-ups at the local gym to get that awesome dashboard six-pack abs. I’m pretty sure you might have come across with this kind of dude even once—or you might have friends that are metrosexuals.

Through all these years, men have learned how to take care of their skin and not just become confident with it. Gone are the days when guys couldn’t care less about their skin—where you could even have a fried egg on their oily faces. Guys now are more open to use facial wash, scrubs, whitening soaps and masculine deo spray such as Kojie.San Men as well as other men beauty stuff to get rid of all the oil, dirt and grime off their faces. They also started using SPF/sunscreen lotions and skin protection creams (even anti-aging) to make their skin soft, supple, healthy, grease-free and young looking.

Guys also began to follow the three basic beauty regimen: cleanse, tone and moisturize. In fact, some guys even go overboard to the extend of choosing to undergo botox treatments, stem cell or other aesthetic surgeries just to help them improve their looks.

All these stuff shouldn’t make metrosexual men to be considered as gay. Being naturally vain for guys doesn’t necessarily mean that they are part of the third sex. When a guy wears pink, he shouldn’t be labeled as effeminate. A real man wears pink. For as long as the guy is completely comfortable with his own sexual preference I think there’s really nothing wrong with that.


Being a man means not just the opposite of being a woman. It means standing up for one’s conviction and being able to stick with that no matter what.  It means being responsible enough to face whatever consequences that goes along with every decision a guy makes for himself. Being a real man means giving respect not just to women and the elderly, but for all living things including that embryo in a mother’s womb. It isn’t all machismo—it doesn’t count how many beers you’ve down, counting on how many basket hoops you’ve taken or how many past girlfriends you’ve had. Being a man isn’t really for a show—definitely not the Narcissus kind-of-guy (falling in love with one’s self because of superficial looks). It isn’t all about “porma”. Metrosexual isn’t really that bad. We had to admit that good looks count a lot. Being a drop-dead-gorgeous looking guy should not be the end all and be all of a guy’s personality. You have to be presentable looking and not totally an honest-to-goodness physically attractive guy, because it has something to do with the initial attraction. I’d be hypocrite if I’d say that it doesn’t really matter. But it comes only as secondary to what’s truly important. A true guy has to have a heart. He has to have compassion and must be God-fearing.

Be a Lover and not a fighter. After all, being "astig" isn't all machismo but a true ladies' man.

They say that others make their lasting impressions through how they look, but with Koji San Men’s Deo Spray, you can make a lasting memory out of the masculine fragrances that perfectly blends with your body. Therefore, you make a lasting memory and impressions. Armed with that good heart who doesn’t regard women as toys and treats them the way they deserve to be treated, you’ll definitely be the guy anybody would love to introduce to the parents. 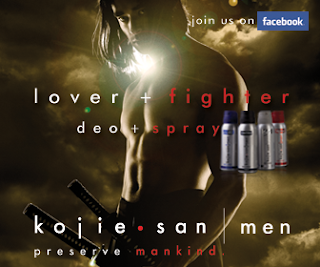