The outbreak of pandemic Covid-19 all over the world have disturbed the political, social, economic, religious, and financial structures of the whole world. It has greatly affected even the world’s topmost economies such as the US, China, UK, Germany, France, Italy, Korea and Japan as well as many others are on the verge of collapse. The Philippines isn’t spared because we have also been badly hit by the virus that has plagued the globe.

Stock markets around the world have been pounded and oil prices have fallen off a cliff. There were establishments that have declared bankruptcy such as The Century Seafood restaurant in Manila and there are those that needed to close down like The Marco Polo Hotel in Davao. People have filed for unemployment and have started searching for jobs online. Also, many experts on economic and financial matters have warned about the worsening condition of global economic and financial structure.

Due to the Covid-19 outbreak, people are all going digital. Meetings are done using Zoom and Skype, while the remaining classes were done online. Even press conferences are now being held online. I recently attended a webinar on Sun Life Asset Management Company Inc. [SLAMCI] about their Market Outlook Forum in 2020. Sun Life Philippines’ President Ms. Valerie N. Pama said that the company had always been digitally active.

In fact, they’re one of the first companies that use various digital channels in order to reach out to more people. As they target the young professionals or the so-called millennials, one can even start investing by means of having a selfie and paying Php100! There are numerous ways on how to start an investment via an online application. Sun Life Prosperity Money Market Fund gives you a chance to experience financial freedom in the future by starting to invest early on in life. With online transactions, you can pay your bills and auto-invest via ATM cards in a few mouse clicks.

Sun Life’s Sun Rise Portal is a more convenient way to invest because you need not leave your house and you can do so in the comfort of your home. Invest in mutual funds thru salary deductions through your chosen investment scheme. Ms. Parma also shared that Sun Life also leads in terms of conducting financial literacy online. They held a various online webinar on mutual funds, investing online with SLAMCI’’s Bills Payment program etc.

Covid-19 is harming the global economy because the world has been experiencing the most difficult economic situation since World War-II. When it comes to the human cost of the Coronavirus pandemic it is immeasurable therefore all countries need to work together with cooperation and coordination to protect human beings as well as limit the economic damages. For instance, the lockdown has restricted various businesses such as traveling to contain the virus consequently this business is coming to an abrupt halt globally.

Keeping in a view of the staggering situation, we should all prepare for worsening conditions and do a strategy to combat Covid-19 as losses could be reduced. The spread of the pandemic is picking up speed and causing more economic damages. As for the jobs of common people are concerned, there is also a real threat of losing their jobs because with business shutting down that shows that companies will be unable to pay to workers resultantly they have to lay off them. While when it comes to the stock market, it is severely damaged by Covid-19 such as the stock market of the country is down by about thirty percent. So, the impact of Covid-19 is severe on the economic structure of the world because people are not spending money resultantly businesses are not getting revenue therefore most of the businesses are shutting up shops.

It has been observed that the economic recovery from this fatal disease is only possible by 2021 because it has left severe impacts on the global economy and the countries face multiple difficulties to bring it back in a stable condition. Most of the nations are going through recession and collapse of their economic structure that points out the staggering conditions for them in this regard almost 80 countries have already requested the International Monetary Fund (IMF) for financial help. Most of the economists have already predicted the recession to happen because there is no surety and still, no one knows how for this pandemic fall and how long the impact would be still difficult to predict. 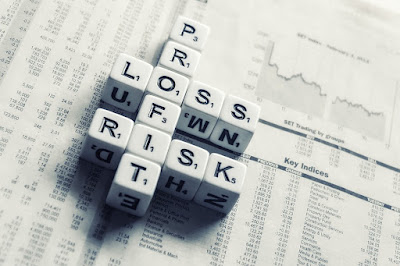 We had never seen anything like this, we have a portion of the economy and people under lockdown has a huge impact on what can be produced and not produced. As Covid-19 has already become a reason for closing the multiple businesses and closure of supermarkets which seems empty nowadays. Therefore, many economists have fear and predicted that the pandemic could lead to inflation.

Since the NCR will be put into GCQ starting June, major economies are starting to reopen, but not yet at full capacity. But there are several risks involved such as the Covis-19 impact on the world economy may not yet be fully priced-in by the market. About 36mn have filed for jobless claims in the US in the last 8 weeks. However, the continued drop in global oil prices due to OPEC+ price war and slowdown in demand. There are positive developments in several experimental drugs but the credit market may be facing a liquidity crisis and heightened defaults.

ARE WE BENDING THE CURVE?

Countries like Thailand, Vietnam , and New Zealand have all successfully flattened the curve. They have been no reported new Covid-19 cases in their respective countries. How come these neighboring countries were able to control the spread of the virus? But nearby countries like Indonesia and Korea (now experiencing the “second wave”) and the Philippines, where Covid-19 cases are still spreading with mixed results despite the efforts done on community quarantine.

There are various sectors and economies that seem most vulnerable because of this pandemic, such as, both the demand and supply have been affected by the virus, as a result of depressed activity Foreign Direct Investment flows could fall between 5 to 15 percent. Besides, the most affected sectors have become vulnerable such as tourism and travel-related industries, hotels, restaurants, sports events, consumer electronics, financial markets, transportation, and overload of health systems.


Firstly, continue with essential containment measures and support for the health system. Secondly, shield affected people and firms with large timely targeted fiscal and financial sector measures. Thirdly, reduce stress to the financial system and avoid con tangent. Fourthly, they must plan for recovery and must minimize the potential scaring effects of the crisis through policy action. Concerning the serious and worsening conditions all over the world, nations need cooperation and coordination among themselves including the help and mature as well as sensible behavior of people to effectively fight against Coronavirus. Otherwise, because of the globalized and connected world, wrong actions and policies taken by any state will leave a severe impact on other countries as well. This is not the time of political point-scoring and fight with each other rather it is high time for states to cooperate, coordinate, and help each other to defeat this fatal pandemic first for saving the global economic and financial structure. While there is no way to tell exactly what the economic damage from the global COVID-19 novel coronavirus pandemic will be, there is widespread agreement among economists that it will have severe negative impacts on the global economy.

To curb the spread of the coronavirus, authorities around the world implemented lockdown measures that have brought much of global economic activity to a halt.

Many businesses have been forced to reduce operations or shut down, and an increasing number of people are expected to lose their jobs. Companies in the services industry, a major source of growth to many economies, were among the hardest hit in the coronavirus pandemic.  Manufacturers have also been hit, and world trade volume could once again plummet this year.

Since emerging in the Chinese city of Wuhan late last year, the coronavirus disease has spread to 185 countries and territories — infecting more than 2.7 million people and killing over 190,000 globally, according to data compiled by Johns Hopkins University.

To stem further spread of the virus, authorities around the world implemented measures to lock down countries and cities to varying degrees. That includes closing borders, shutting schools and workplaces, and limiting large gatherings.

Those restrictions, which the International Monetary Fund called the “Great Lockdown,” brought much of global economic activity to a halt, hurting businesses and causing people to lose their jobs.

AGGRESSIVE RESPONSE OF THE PHILIPPINE GOVERNMENT

BSP has already cut 125bps to 2.75 this year and we expect this to still go lower by another 50bps in the coming months. Another 200bps was cut from the RRR to 12% and likely to see another 200bps going forward.

The BSP has also bought (for the first time) government bonds from the BTR in the amount of P300bn and an unspecified amount from the open market.

Bayanihan Act As One Law has allowed the President to realign budget to fight COVID19 which includes P200bn for direct handouts to 18mn families (P5-8k/month for 2 months).

Multilateral borrowings from ADB, World Bank, and AIIB in the amount of $6bn.

As of May 18, the lower house passed the Philippine Economic Stimulus Act (PESA) which is a P568bn stimulus package that targets private enterprise/SMEs/banks/ and features a combination of spending, negative interest loans, guarantees, and subsidies. 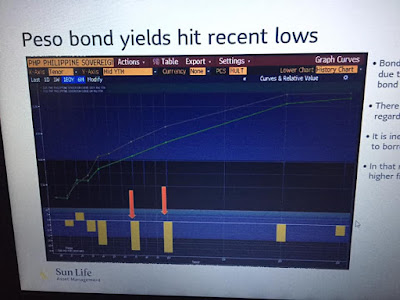 Enriquez thinks that country is under a “U-shaped” curve where the GDP contracts by several quarters the slow recovery. In another 1-2months to restart the economy, this brings us to 3rd quarter 2020 to see the start of a recovery. By 4th quarter of 2020, we think this will be a strong quarter as the rebound should be underway. In 2021, we expect vaccines to be available. By this time, the economy should be at or close to normal levels. “We are expecting the economy to contract,” says Enriquez during the webinar. This is one of the major contraction since the Asian crisis of 1998 and an even worse contraction in the household than the 1984/85 Debt Crisis. We expect a probability-weighted GDP of -2.2% for GDP and Consumption of -8.4%.

Bond yield went down due to additional liquidation bond-buying operations to aid financial support to the marginalized communities. There is still a lot to be done regarding the government’s funding plans. It is inevitable that the government will have to borrow heavily to fund the stimulus. In that regard, we think rates will tread higher from here. 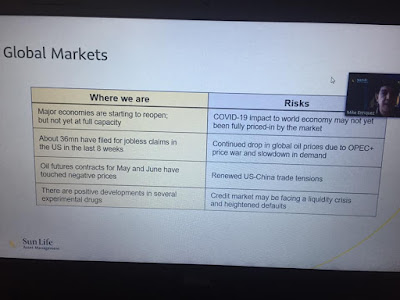 Financial markets have rebounded from their recent lows but volatility will continue. Major economies are about to re-open, but the new norms may hamper as its road to recovery. Until a vaccine is produced [which will be more likely to happen early next year], things will remain uncertain. [Low touch economy]. Market sentiment can quickly change from Fear to FOMO. 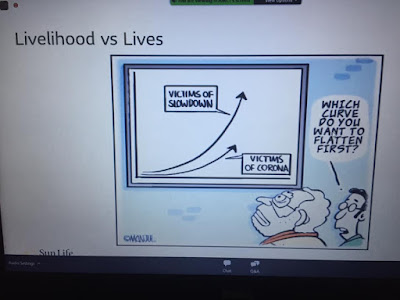 “This is a truly global crisis as no country is spared,” Gita Gopinath, the IMF’s chief economist, wrote in a blog post earlier this month. But Sun Life Philippines Chief Investing Officer, Mr. Michael Gerard Enriquez is still very much optimistic about it. He says the economy will be able to bounce back soon although it will surely take some time as people will slowly embrace the "new normal" and hopefully when the vaccine becomes available early next year, we will be able to gain whatever we may have lost. But overall, he still sees brighter days ahead.