First there was the rise of coffee shops. Then it was followed by the milk tea craze. And now, with the arrival of Koomi Philippines, the popular purple-rice yoghurt drink specialty shop from Australia has finally made it to the Philippine shore.

You can get your hands on this trendy drink at Koomi’s branches: SM Mall of Asia, Eastwood, Robinson’s Magnolia, and Podium. Soon they can also be found at SM Megamall, Uptown BGC, Power Plant Mall, Lucky China Town, Estancia and SM North Edsa.

If you’re like me who loves to both drink and chew on beverages, this one’s definitely for you. I’m no health expert, but I’d like to believe that Koomi’s a better alternative to sugar-laden milk tea. After all, Koomi’s made from honest-to-goodness yoghurt from cow’s milk.

Koomi PH has two blend choices: Aussie and Pinoy blend. Aussie blend is more on its natural sourness. And to suit the Filipino palate, Koomi PH has tweaked the drink a bit so they also have Pinoy blend which has a creamy texture and a bit sweeter than its Aussie counterpart.


I’d like to emphasize though that this isn’t a bubble tea shop (although Koomi has their own bobba flavor on yoghurt drink). They have an array of creamy yoghurt drinks for you to choose from, which includes purple rice (Koomi’s signature drink), fruit toppings from dragon fruit, strawberry, coconut, jujube [read: that’s dates for you] and charcoal activated stuff to pistachio and almond nuts to mangoes.


By this time, you can already imagine how it would taste like—creamy, slightly sweet-and-tart yoghurt, with grains of soft purple rice, nuts or oats to be slurped up in a fat straw. If you ask my honest opinion, I guess some of the reasons why Koomi is slowly but surely getting a cult following in the country is because the drinks they’re offering are fresh-tasting and refreshing; a healthier alternative to much sweet beverages; the coffee and milk tea-induced consumers would want to try something new and last but not the least, it might help in digestion after meals since all yoghurts contain probiotics. 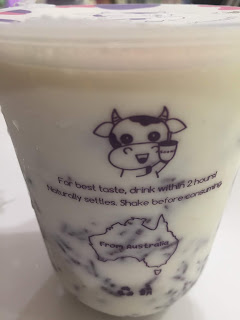 When Koomi PH had just started last year, they were getting their purple rice from Thailand. But now, it’s such a joy to know that Koomi PH has locally sourced their purple rice. At least, it’s nice to know that they are helping Filipino local rice producers, it is indeed an advantage. Purple rice is known to be rich in protein and calcium. The grains are larger than usual, colored between purple-black and tastes sweet with an agreeable stickiness. I don’t have any idea how Koomi PH prepares their purple rice but it’s got that perfect chewy texture that goes well with their yoghurt drink. 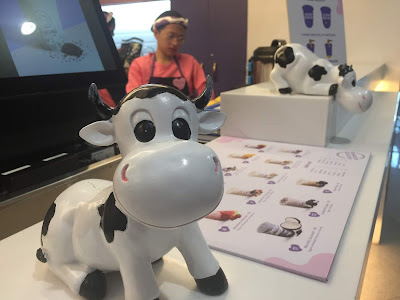 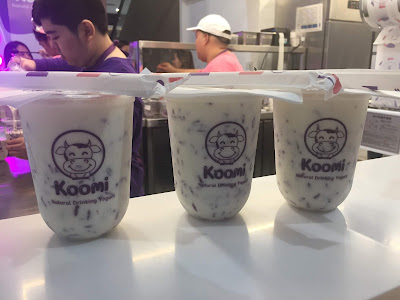 Our curiosity was piqued with Koomi and it all began when I saw the queue started to grow. “Rice yoghurt. What is that? How can you mix rice with yoghurt?” These were my initial thoughts toward the seemingly weird yoghurt drink concept. Koomi PH is the first of its kind in the Philippines. In time, pretty soon, I know more people will jump into the bandwagon and this will become a new food craze in the country.  Did the purple rice yoghurt drink live up to my expectation?

The Koomi PH shops also allows for both takeaways and a sit-down concept, in a pretty pink and purple colored interiors for a drink during a lazy afternoon. And again I may be biased because as you all know, I love purple.

A word of advice: For first timers, if you want something adulterated, I suggest go for their signature classic Koomi PH’s Stick-On-Me Purple Rice Yoghurt. Before you poke the fat straw, make sure to shake your cup well so as to incorporate all the ingredients and make a perfect blend of purple rice and yoghurt. I don’t know about you, but I personally believe it does something magical to your drink as shaking sort of enhances the taste. Oh and for best taste, consume the cup within two hours.

First impressions: The first time I tried Koomi, I did try their Aussie blend. I guess I’m going to be biased since it was love at first sip since I’m fond of yoghurt drinks. I always have lassi each time I dine in my favorite Mediterranean restaurant. But if you aren’t into yoghurts, I think it might take sometime before you get used to this drink or it might even be an acquired taste for others.

Don’t be deceived, it’s not as thick and as carb-heavy as I had imagined it to be. Surprisingly, it even has that consistency of a smoothie. For someone who’s got type II diabetes mellitus, I try to refrain from too many sugary stuff. In fairness, the sweetness level of Koomi’s Aussie blend was pleasantly low and mellow. The tart from the yoghurt wasn’t as strong as I thought it would be. As you slurp, you get QQ bits of purple-rice that’s so soft you can slowly chew on. Unlike with bobba pearls which might make you choke, these purple-rice aren’t that hard to chew on. While slurping, I was reminded of our native delicacy biko with the goodness of yoghurt. This Koomi sticky-purple rice yoghurt drink can actually be quite filling, so I highly recommend taking sips and slowly enjoy it.

I had also tried their Dragon Fruit yoghurt. The base is filled with purple-squashed dragon fruit or pitaya—a tropical-sweet taste with slight sourness that goes well with the entire drink. Give the cup a good shake and watch it turn beautifully vibrant-purple.

What do I love most about Koomi PH yoghurt drinks? They are such a real treat for our usually humid tropical weather. But the best part is that they are able to keep the intense flavors of the fruits and with real bits for you to slurp and chew on—I mean, hello, I see no reason why this new beverage just won’t be a click to the public.

Well, as always, don’t just take my word for it, better try them for yourselves so you’d know exactly if it suits your palate. Visit Koomi PH’s branch nearest you.